The Laser Interferometer Space Antenna mission (LISA), slated for launch later this decade, will go about testing one of Einstein’s key predictions, that gravitational waves should emanate from exotic objects like black holes. Detectors like the Laser Interferometer Gravitational Wave Observatory (LIGO) have operated on Earth’s surface but are subject to seismic noise that disturbs the observations in some of the key frequency ranges. The hope is that the space-based LISA will be able to go after the low-frequency gravitational wave spectrum to detect such things as the collision of black holes, the merger of galaxies or the interactions of neutron star binary systems. 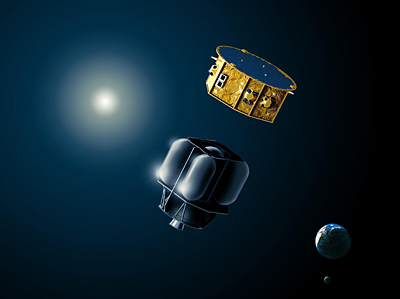 The good news out of the European Space Agency is that the LISA Pathfinder precursor mission, planned for a 2014 launch, is showing the accuracy needed to demonstrate what the more sophisticated LISA mission should be able to do. LISA Pathfinder is a small spacecraft unable to make a direct detection of gravitational waves, but if all goes well it should be able to test whether objects moving through space without external influences trace out a slight curve — a geodesic — because of the effect of gravity upon spacetime. That would take us one step closer to the actual detection of gravitational waves using even more sensitive technologies in the full LISA mission.

Image: LISA Pathfinder will pave the way for the LISA mission by testing in flight the very concept of the gravitational wave detection. It will put two test masses in a near-perfect gravitational free-fall and control and measure their motion with unprecedented accuracy. This is achieved through state-of-the-art technology comprising the inertial sensors, the laser metrology system, the drag-free control system and an ultra-precise micro-propulsion system. Credit: Astrium.

The early results on LISA Pathfinder are promising. Detecting ripples in spacetime requires measurements with the accuracy of 10 billionths of a degree, yet thermal vacuum tests are revealing the spacecraft’s subsystems can produce this kind of performance. Under space-like test conditions with an almost complete spacecraft, LISA Pathfinder has been demonstrating a 2 picometer accuracy — a picometer is about a hundredth the size of an atom — and expectations are that once in space the observatory will be able to do even better.

Aboard the spacecraft will be two 4.6 cm3 test masses that will float within two chambers 35 cm apart in the core of the observatory. Their relative positions are to be tracked by a laser measuring system. Any gravitational disturbances should cause minuscule changes in their positions. Bengt Johlander, payload engineer for LISA Pathfinder, describes the system:

“We are seeking to keep the geodesic motion of our test masses as pure as possible. The masses are free to move – and if our experiment is set up correctly they should move together in concert – while the surrounding spacecraft is guided by their motion to follow in the same direction. It is impossible to have zero perturbations, but we have fixed a precise budget for disturbances we will stay within.”

The perturbations that must be avoided are vanishingly small, but any of them could compromise the experiment. They include solar radiation pressure, slight magnetic influences or vibrations from the body of the spacecraft and, remarkably, the internal gravitational pull of the spacecraft structure itself. LISA Pathfinder is to operate 1.5 million kilometers from the Earth at the L1 Lagrange point. The success of its systems paves the way for the later LISA mission, which will involve a trio of spacecraft flying 5 million kilometers part while linked by laser beams. ESA offers a useful backgrounder on LISA Pathfinder and the subsequent LISA mission. And be aware of this graduate level Web-based course on gravitational waves that Caltech makes available.