A Possible Subsurface Lake on Europa

An area of disrupted terrain called Thera Macula on Jupiter’s moon Europa may be evidence for a body of liquid water with the volume of North America’s Great Lakes encased within the ice. The notion comes from analysis of floating ice shelves that seem to be collapsing. That an ocean exists beneath the ice on Europa should surprise no one, but what is significant about the recent findings is that they suggest a way to exchange nutrients and energy between the surface and the ocean beneath. Such a mechanism changes the nature of the speculation about whether Europa’s ice is thick or thin. The case for astrobiology always seemed stronger if the ice were thin, but it seems that ways to exchange material with the surface may exist in either scenario.

At least that’s what this intriguing finding suggests. Britney Schmidt (University of Texas at Austin) is lead author on the paper that appears online in Nature:

“One opinion in the scientific community has been, ‘If the ice shell is thick, that’s bad for biology’ — that it might mean the surface isn’t communicating with the underlying ocean. Now we see evidence that it’s a thick ice shell that can mix vigorously, and new evidence for giant shallow lakes. That could make Europa and its ocean more habitable.”

When you work with Europa, you’re relying on images taken by the Galileo spacecraft, focusing in this case on two bumpy features in the disrupted topography that scientists call chaos terrain. The area known as Thera Macula shows evidence of active resurfacing of ice over a large body of water. Evidence that such terrain can still be forming is good news for those hopeful for life beneath the surface. The speculation is that many such lakes may exist throughout shallow regions of Europa’s shell, many of them covered with similar collapsing ice shelves. 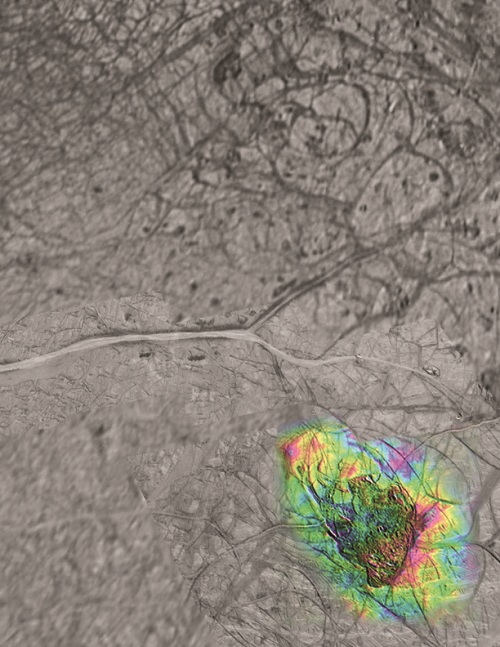 The researchers worked with Galileo data and applied processes observed here on Earth in areas where ice shelves are in motion and volcanoes are found beneath overlying glaciers. Their work indicates that chaos terrains “… form above liquid water lenses perched within the ice shell as shallow as 3 kilometres. Our results suggest that ice–water interactions and freeze-out give rise to the diverse morphologies and topography of chaos terrains.” All of this means that nutrients and energy may be available in the deep ocean, but we won’t know for sure until we can develop a mission that is designed to probe beneath the ice. The same kind of radar instruments that study Earth features within ice can be adapted for such a spacecraft.