The on-again, off-again SETI search at the Allen Telescope Array is back in business as Jill Tarter and team focus in on some of the more interesting worlds uncovered by the Kepler space telescope and follow-up observations. You’ll recall that last April the ATA was in hibernation, having lost its funding from the University of California at Berkeley, which had operated the Hat Creek Observatory in northern California where the ATA is located. It took a public campaign to raise the funds needed for reactivation and new operations, as well as help from the US Air Force in the form of its own assessment of the ATA’s applicability in its space situational awareness studies, which include developing a catalog of orbiting space objects.

The SETI Institute, along with third-party partners and volunteers, has set up SETIstars.org as a fund-raising operation specifically targeting the ATA — it’s important to realize that getting the array back in operation is a first step in the larger process of meeting expenses for continuing work, so you’ll want to check in on SETIstars regularly to see how the campaign is going. 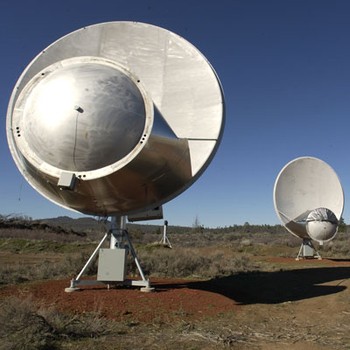 But back to the forthcoming ATA work on Kepler planets. The plan is to work through the Kepler discoveries, taking advantage of the fact that SETI now knows for a fact that the stars in question have planets. Thus Jill Tarter (SETI Institute):

“This is a superb opportunity for SETI observations. For the first time, we can point our telescopes at stars, and know that those stars actually host planetary systems – including at least one that begins to approximate an Earth analog in the habitable zone around its host star. That’s the type of world that might be home to a civilization capable of building radio transmitters.”

The worlds found in the habitable zone (here defined as the zone in which liquid water could exist on the surface) will receive priority, but the people behind the ATA are as aware of the dangers of preconceived notions as any of us, and if sufficient funding is found, all the planetary systems Kepler discovers will be examined across the 1 to 10 GHz terrestrial microwave window. The ATA’s ability to search across tens of millions of channels simultaneously gives it capabilities far beyond those of more common SETI work in limited frequency ranges.

Meanwhile, the Kepler Science Conference continues, with the program available online. And I don’t want to get deep into the Kepler conference without getting to the recent work at Caltech, where astronomers announced the discovery of 18 planets around stars more massive than the Sun. This work involved the Keck Observatory in Hawaii with follow-up work at McDonald and Fairborn Observatories (Texas and Arizona), focusing on ‘retired’ A-class stars more than one and one-half times as massive as the Sun. These so-called ‘retired’ stars are now in the process of becoming sub-giants. The planets were detected by radial velocity methods.

The planets here all have masses similar to Jupiter’s and represent a 50 percent increase in the number of planets known to be orbiting massive stars. What’s particularly interesting here is the wider orbits in which these planets are found. All are at least 0.7 AU from their stars, while a sample of 18 planets around stars like the Sun would turn up at least half of them in close orbits, the result of planetary migration. John Johnson (Caltech), first author of the paper on this work, says the question is whether gas giants around massive stars do not migrate in the first place, or whether they do migrate but are simply destroyed when they plunge into their stars. Also interesting is the fact that the orbits of these planets are primarily circular, while planets around Sun-like stars vary from elliptical to circular.

The authors see the new planets as further evidence supporting the core accretion model of planet formation, in which planets grow through the accumulation of small objects to ‘snowball’ into the resulting world. Stellar mass seems to be a crucial factor, which would not necessarily be the case with the gravitational instability model, in which knots of matter in the circumstellar disk collapse rapidly to form a planet.

[The] observed correlations between stellar properties and giant planet occurrence provide strong constraints for theories of planet formation. Any successful formation mechanism must not only describe the formation of the planets in our Solar System, but must also account for the ways in which planet occurrence varies with stellar mass and chemical composition. The link between planet occurrence and stellar properties may be related to the relationship between stars and their natal circumstellar disks. More massive, metal-rich stars likely had more massive, dust-enriched protoplanetary disks that more efficiently form embryonic solid cores that in turn sweep up gas, resulting in the gas giants detected today.

The paper is Johnson et al., “Retired A stars and their companions VII. Eighteen new Jovian planets,” accepted by the Astrophysical Journal (preprint).

Previous post: Kepler-22b: A ‘Super-Earth’ in the Habitable Zone