A Comet Consumed by the Sun

Imagine what we could do if we could attain speeds of 640 kilometers per second. That’s the velocity of a comet recently tracked just before passing across the face of the Sun and apparently disintegrating in the low solar corona. I’m just musing here, but it’s always fun to muse about such things. 640 kilometers per second drops the Alpha Centauri trip from 74,600 years-plus (Voyager-class speeds) to less than 2000 years. A long journey, to be sure, but moving in the right direction, and in any case, these are speeds that would allow exploration deep into the outer system. We’re a long way from such capabilities, but they’re a rational goal.

But back to the comet. The object was discovered on July 4, 2011 and designated C/2011 N3 (SOHO), the latter a reference to the ESA/NASA Solar and Heliospheric Observatory, whose Large Angle and Spectrometric Coronagraph made the catch. On July 6, NASA’s Solar Dynamics Observatory was able to pick up the comet some 0.2 solar radii off the Sun, where it was tracked for a mere 20 minutes before evaporating some 100,000 kilometers above the solar surface. The Extreme-Ultraviolet Imager aboard one of NASA’s Solar-Terrestrial Relations Observatories (STEREO) was also able to observe the comet, allowing researchers to get a good read on its makeup, as the lead author of the paper on this work, Karel Schrijver (Lockheed Martin Solar and Astrophysics Laboratory), points out:

“This unprecedented passage of a comet through the solar atmosphere in view of our AIA cameras [the Atmospheric Imaging Assembly aboard the SDO] presented us with a remarkable opportunity. As we witnessed this comet evaporate as it traversed a known amount of space over a specific period of time, we were able to work backward to estimate its mass just before it reached the Sun. We’ve been able to bracket its size as between 150 and 300 feet long, with a greater likelihood that it lies at the upper end of that range. And it most likely weighed in at as much as 70,000 tons, giving it about the weight of an aircraft carrier, when it first became visible to AIA.” 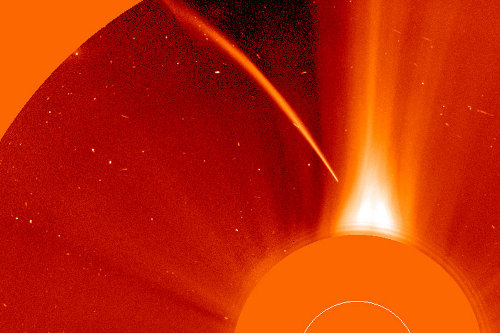 Image: Although it’s not C/2011 N3, this Sungrazer was also destroyed, its fiery fate recorded by the SOHO spacecraft’s Large Angle Spectrometric Coronagraph (LASCO) on December 23, 1996. LASCO uses an occulting disk, partially visible at the lower right, to block out the otherwise overwhelming solar disk allowing it to image the inner 5 million miles of the relatively faint corona. The comet is seen as its coma enters the bright equatorial solar wind region (oriented vertically). Spots and blemishes on the image are background stars and camera streaks caused by charged particles. Credit: LASCO, SOHO Consortium, NRL, ESA, NASA.

In addition to the image above, images of the ‘string of pearls’ comet Shoemaker-Levy 9 breaking apart before impact with Jupiter in 1994 inevitably come to mind, especially when we learn that C/2011 N3 likewise broke into a series of large chunks ranging up to 45 meters in size as it began to disintegrate. The comet’s coma — the envelope of ice, dust and gas surrounding its nucleus — is thought to have been some 1300 kilometers across, with a cometary tail approximately 16,000 kilometers long. The breakup of the comet was further flagged by pulsations in the brightness of the tail, a phenomenon Schrijver’s team was able to put to good use:

“I think the light pulses in the tail were one of the most interesting things we witnessed,” said Schrijver. “The comet’s tail gets brighter by as much as four times every minute or two. The comet seems first to put a lot of material into that tail, then less, and then the pattern repeats. Only because of these pulses can we measure how fast the tail falls behind the comet as its gases collide with those in the Sun’s atmosphere. And that, in turn, helps us measure the comet’s weight.”

A cometary demise is a spectacular event, but it turns out that the SOHO spacecraft has observed more than 2000 comets as they approached the Sun. The so-called Kreutz Sungrazers are comets whose orbits take them within one to two solar radii of the photosphere every 500 to 1000 years. This is the largest known group of comets, one which is thought to have resulted from the breakup of a massive progenitor body several thousand years ago. The smaller Kreutz group comets rarely survive perihelion. While the SOHO observatory now tracking a Sun-grazing comet on an average of once every three days, those that make it into the solar corona should be useful tools for extending our knowledge of cometary properties.