The Dawn spacecraft, orbiting Vesta since July of last year, reached its lowest altitude orbit in December, now averaging 210 kilometers from the asteroid’s surface. Ceres is Dawn’s next stop, but that journey won’t begin until the close-in work at Vesta is complete, with the craft in its low altitude mapping orbit for at least ten weeks and then another period at higher altitudes before Dawn leaves Vesta in late July. The spacecraft’s Gamma Ray and Neutron Detector (GRaND) instrument is already telling us much about the giant asteroid’s surface composition.

In fact, the five weeks of mapping at low-altitude have provided the first look at global-scale variations on Vesta. GRaND measures the abundance of elements found in planetary surfaces, and while its investigations are still in the early stages of analysis, it’s clear that Vesta’s surface varies widely as opposed to the mostly uniform composition of smaller asteroids. We know that Vesta developed a core, mantle and crust, making it something closer to a planet than an asteroid. We’ll learn a great deal more as the low-altitude mapping continues and new results arrive.

Meanwhile, have a look at this close-in Dawn image, showing a crater with smaller craters on its edge, with rough textures in the crater wall (far right) that may indicate underlying bedrock. The image shows an area in the Rheasilvia basin in the south polar region, obtained with Dawn’s framing camera on December 18, 2011 — the distance to the surface here is 272 kilometers. 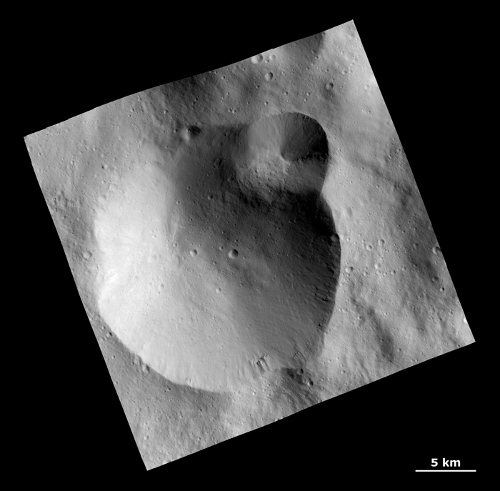 Image: An area in Vesta’s south polar region, centered around 58.3 south latitude and 283.7 degrees east longitude. Acquired during the LAMO (Low Altitude Mapping Orbit) phase of the mission, the image has a resolution of about 25 meters per pixel. Credit: NASA/ JPL-Caltech/ UCLA/ MPS/ DLR/ IDA.

Let’s keep an eye not just on Dawn’s science results but on the performance of its thrusters as we continue to shake out ion propulsion and tweak its capabilities with missions to the outer system. The spacecraft’s thrusters apply more than 1000 volts to accelerate charged particles (ions) that are expelled out the back at speeds up to 40 kilometers/second. Xenon is used in these thrusters because it is a relatively massive atom, offering higher thrust than other possible propellants. Even so, the acceleration is tiny, underlining the fact that ion propulsion is effective not just in its efficiency but also in its cumulative acceleration over long periods.

As the Dawn team reminds us, the force of an ion thruster on the spacecraft is comparable to the weight of a single sheet of paper. But their enormous fuel efficiency means that the thrusters can continue this tiny push not just for days but for years, allowing the effects to build. Dawn chief engineer Marc Rayman has fittingly called ion thrusting ‘acceleration with patience.’ In a 2006 report on the mission, Rayman summarized the advantages of this kind of propulsion:

The rate at which xenon is flowed through the thruster is very low. At the highest throttle level, the system uses only about 3.25 milligrams/second, so 24 hours of continuous thrusting would expend only 10 ounces of xenon. Because the xenon is used so frugally, the corresponding thrust is very gentle. The main engine on some interplanetary spacecraft may provide about 10,000 times greater thrust but, of course, such systems are so fuel-hungry that their ultimate speed is more limited.

Dawn uses a solar array to power up the ion propulsion system. At maximum throttle, Rayman notes, the acceleration is equivalent to about 7 meters/second/day, so a full day of thrusting can change the spacecraft’s speed by something like 24 kilometers per hour. By mission’’s end, the spacecraft will have accumulated over five years of total thrust time, with an effective change in speed of 11 kilometers per second. Slow but steady gets you to your target, and Dawn’s mission planners have noted that using conventional chemical propulsion, the extra mass would have put the mission well beyond budget, yet another plus for frugal ion technologies.