Eternal Monuments Among the Stars

Yesterday’s post looked at SETI and its assumptions, using the lens of a new paper on how the discipline might be enlarged. The paper’s authors, Robert Bradbury, Milan Ćirković and George Dvorsky, are not looking to supplant older SETI methods, but rather to broaden their scope by bringing into play what we are learning about astrobiology and artificial intelligence. It is perilous, obviously, to speculate on how an alien civilization might behave, yet to some extent we’re forced to do it in choosing SETI targets, and that being the case, why not add into the mix methods that go beyond our current radio and optical searches, methods that may have a better chance of success?

A key to extending SETI’s reach is to question the very idea of contact. One assumption many of SETI’s pioneers had in common was that there was an inherent need to communicate with other species, and that this need would take the form of intentional radio beacons or optical messages. What Bradbury, Ćirković and Dvorsky are calling ‘Dysonian SETI’ makes no such assumption, and actually gains strength from the fact that it does not. Acknowledging that we have not yet found an undisputed detection signature, Dysonian SETI says that intention is not necessary. A civilization may be detectable through its artifacts. A Dyson sphere, for example, should show an infrared signature that is distinguishable from the normal spectra of stars. 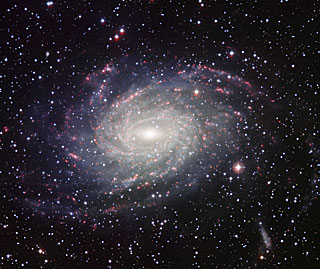 Once in place, a Dyson shell should be durable enough to potentially outlive its creators, ‘Ingrafted in eternal monuments/Of Glory,’ to cite the verses from Lucretius the authors use to illustrate their point. Thus we get around a significant problem noted by many SETI writers — the ‘window of opportunity’ for radio SETI is short, a mere flicker in the span of our own civilization, much less the span of our planet’s existence. Even if you posit a stunningly optimistic figure of 106 technologically advanced civilizations in the galaxy, it is clear that these cultures will exist at different levels of development. What are the odds that two will be at precisely that stage of technical evolution to enable back and forth radio communications?

Image: NGC 6744, a spiral galaxy some 30 million light-years away in the southern constellation of Pavo (The Peacock), as captured by the Wide Field Imager on the MPG/ESO 2.2-metre telescope. If tens of thousands of civilizations co-exist in such a galaxy, how many will be close enough to each other in terms of technological development to make radio or optical contact likely? Credit: ESO.

Dysonian SETI would surmount this problem because enormous astro-engineering projects could exist as archaeological survivals no matter what the fate of their parent civilization. The idea seems plausible and does not foreclose the ongoing SETI effort in radio and optical wavelengths. But the authors point out that our assumptions about artifacts themselves also need to be adjusted. If civilizations move toward a ‘singularity’ in which artificial intelligence leads to a kind of postbiological evolution, then searching for Dyson spheres takes a twist.

Why? Because so far we have assumed a Dyson shell roughly the size of Earth’s orbit, one with a working temperature that would sustain our kind of biological life on the surface of the shell. These parameters hardly fit the needs of postbiological intelligence. From the paper:

…from a postbiological perspective, this looks to be quite wasteful, since computers operating at room temperature (or somewhat lower) are limited by a higher kT ln 2 Brillouin limit, compared to those in contact with heat reservoir on lower temperature T…

I think what the authors are referring to above is also called the Landauer limit, which defines the minimum amount of energy needed to alter one bit of information — here k is the Boltzmann constant while T is the temperature of the circuit (K) and ln 2 is the natural log of 2. In any case, cooler is better. The paper continues:

Although it is not realistic to expect that efficiency can be increased by cooling to the cosmological limit of 3 K in the realistic model of the Galaxy, still it is considerable difference in practical observational terms whether one expects a Dyson shell to be close to a blackbody at 50 K, as contrasted to a blackbody at 300 K. This lowering of the external shell temperature is also in agreement with the study of Badescu and Cathcart… on the efficiency of extracting work from the stellar radiation energy. In this sense, the Dysonian approach needs to be even more radical than the published intuitions of Dyson himself.

Beyond the Dyson Shell

Widening the theoretical background of ongoing searches (the authors point to SETI@Home as one example of widely distributed processing) means taking such new perspectives into consideration, and the paper goes on to flag other possible signatures of an extraterrestrial civilization:

Interestingly enough, all of the above have been the subject of initial studies, and the bibliography of the paper (see yesterday’s citation) is laden with these and other references. These investigations have been regarded as little more than curiosities, but the impact of the discovery of clearly artificial objects would have such a quickening effect on human self-awareness that they are clearly worth the limited funds thus far spent on them.

A Dysonian SETI would evolve along the lines suggested by Freeman Dyson himself when discussing the supposed willingness of alien civilizations to communicate with each other, and their implied benevolence when it comes to greeting new members to the ‘galactic club.’ Dyson would have none of it, saying “…I do not wish to presume any spirit of benevolence or community of interest among alien societies.” Why indeed do so, when a search for Dysonian artifacts like Dyson shells would make no such assumptions, while allowing us to bring to bear what we are learning about nanotechnology, artificial intelligence and astrobiology?

Why not widen the search space, then, adding to the already impressive and groundbreaking work of SETI’s pioneers by bringing into play recent findings like those of Charles Lineweaver, whose work shows that Earth-like planets in the habitable zone of the galaxy (itself a relatively new concept) are on average 1.8 billion years older than our planet? Assume civilizations not just millions but potentially a billion or more years older than our own and you play down the importance of contact (it is hard to imagine the advantages of such to the alien culture) but leave open the prospect of discovering the works they have built and possibly left behind.

Let me close with another quote from this vigorous paper re SETI old and new:

…the two approaches are at present compatible and should be pursued in parallel at least until there is better theoretical insight into the preconditions for emergence of technological civilizations in the Galaxy. The ability to extract information from the interstellar environment increases dramatically with each passing year. As the resolution of the data increases, so does the ability to process and infer its nature. This process will deeply challenge conceptions of the Universe and what we think we know about it. It will also challenge the way in which we see ourselves and our potential as an intelligent civilization.