IBEX: The Heliosphere in Motion

The beauty of having spacecraft that far outlive their expected lives is that they can corroborate and supplement data coming in from much newer missions. That’s the case with our Voyager spacecraft as they continue their progress at system’s edge. The Voyagers will be moving outside the heliopause in not so many years, and when they do, they will tell us much about the behavior of charged particles in the interstellar medium. This will bulk up incoming results from IBEX, the Interstellar Boundary Explorer spacecraft, as it studies the neutral particles that routinely penetrate the heliosphere. Our knowledge of true interstellar space is growing.

It’s at the heliopause that we see the boundary between the area defined by the solar wind flowing outward from the Sun and the interstellar medium that surrounds it. Racing outward at an average of 440 kilometers per second, the solar wind is pushing into a region of dust and ionized gas, inflating the bubble we know as the heliosphere. The entire heliosphere incorporates the Sun and all the planets. Because interstellar neutral atoms do not interact with magnetic fields, they move through the heliopause readily, while charged particles do not. Hence the utility of the Voyagers, which will now move into a region from which we’ve had no prior data return. 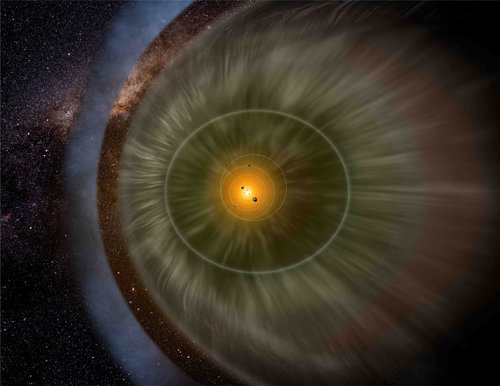 Image: An artist’s rendition of a portion of our heliosphere, with the solar wind streaming out past the planets and forming a boundary as it interacts with the material between the stars. Credit: Adler Planetarium/IBEX team.

IBEX is a long way from the heliopause, orbiting the Earth with an apogee of 322,000 kilometers and a perigee of 16,000 kilometers, but its instruments are designed to map the distant interactions between the solar wind and ionized interstellar material, creating a map of the boundary. In addition, its low-energy energetic neutral atom camera is measuring inflowing interstellar neutral particles of the kind first measured by the Ulysses spacecraft. The IBEX measurements, recently discussed in a set of new papers, are helping us map the distribution of elements like hydrogen, helium, neon and oxygen as they enter the heliosphere from the local interstellar medium. By contrast, Ulysses was only able to detect neutral interstellar helium.

One thing we’re learning is the shape of the heliosphere. Interstellar neutral atoms enter the heliosphere at a speed of roughly 84,000 kilometers per hour. That’s a good deal slower than what Ulysses found, and IBEX sees the neutral particles entering the heliosphere from a somewhat different direction. “With this lower speed, the external magnetic forces cause the heliosphere to become more squished and misshapen,” says David McComas (SwRI), IBEX principal investigator. “Rather than being shaped like a bullet moving through the air, the heliosphere becomes flattened, more like a beach ball being squeezed when someone sits on it.”

IBEX is also showing us that our Sun is located in a region of space where dust and gas are extremely thinly dispersed, a situation different from the relative abundances of certain elements during the period when the Sun was formed. The neon to oxygen ratio in the Sun offers a glimpse of what the abundances of those elements were in that early era. IBEX, by measuring oxygen and neon from the interstellar medium, is finding less oxygen than expected, an indication of possible changes in the medium during the Sun’s lifetime. Alternatively, it is possible that the oxygen is still present but locked up in ice grains in the local interstellar material. McComas again:

“Our solar system is different than the space right outside it, suggesting two possibilities. Either the solar system evolved in a separate, more oxygen-rich part of the galaxy than where we currently reside, or a great deal of critical, life-giving oxygen lies trapped in interstellar dust grains or ices, unable to move freely throughout space.”

Interstellar space is far from empty, and IBEX is showing us what our early interstellar precursor missions may encounter. The Sun is evidently close to the boundary of a local cloud of gas and dust, one of many such clouds in our local galactic neighborhood. Ulysses results had indicated the Sun was placed between the ‘Local Cloud’ and the ‘G-Cloud,’ close to the boundary of the Local Cloud. The new IBEX work challenges this assumption, finding that the heliosphere is still fully within the Local Cloud. But we’re moving quickly (within a few thousand years at most) to leave the Local Cloud and move into what McComas calls ‘a much different galactic environment.’ IBEX and the Voyagers, then, are filling in our knowledge not only of the heliopause but the regions that surround our system as we move through the galaxy. 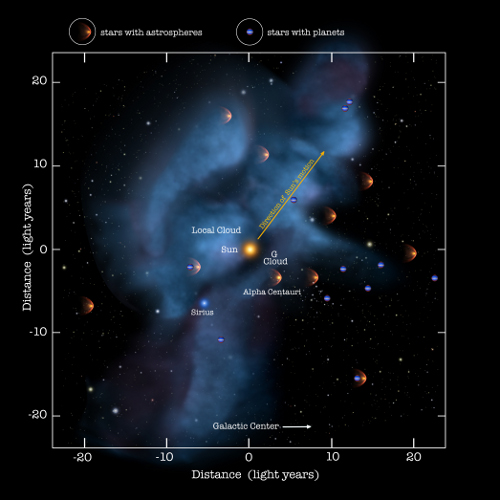 Image: The solar journey through space is carrying us through a cluster of very low density interstellar clouds. Right now the Sun is inside of a cloud that is so tenuous that the interstellar gas detected by IBEX is as sparse as a handful of air stretched over a column that is hundreds of light years long. These clouds are identified by their motions. Credit: NASA/Goddard/Adler/U. Chicago/Wesleyan.

Make no mistake about the importance of the heliosphere — it is an important zone of protection against dangerous cosmic radiation, and thus has implications for the evolution of life, given that varying levels of radiation create genetic mutations and possible extinctions. How the makeup of the interstellar medium affects the heliosphere is thus a major issue, and changes as we move outside the Local Cloud could affect the heliosphere in ways we don’t yet understand. We’ll also use IBEX data to inform our studies of the analogous ‘astrospheres’ surrounding other stars.

Coda: Does any of this business about moving out of a local cloud and into more open interstellar space evoke for anyone else the same pleasing memories of Poul Anderson’s Brain Wave (1954)? Just checking.

The papers on the recent IBEX findings appeared in a Special Supplements issue of the Astrophysical Journal called “Interstellar Boundary Explorer (IBEX): Direct Sampling of the Interstellar Medium,” which appeared on January 31.