‘Super-Earth’ in a Triple Star System

GJ 667C is an M-class dwarf, part of a triple star system some 22 light years from Earth. Hearing rumors that a ‘super-Earth’ — and one in the habitable zone to boot — has been detected around a nearby triple star system might cause the pulse to quicken, but this is not Alpha Centauri, about which we continue to await news from the three teams studying the prospect of planets there. Nonetheless, GJ 667C is fascinating in its own right, the M-dwarf being accompanied by a pair of orange K-class stars much lower in metal content than the Sun. The super-Earth that orbits the M-dwarf raises questions about theories of planet formation.

Thus Steven Vogt (UC Santa Cruz), who puts the find into context, noting that heavy elements like iron, carbon and silicon are considered the building blocks of terrestrial planets:

“This was expected to be a rather unlikely star to host planets. Yet there they are, around a very nearby, metal-poor example of the most common type of star in our galaxy. The detection of this planet, this nearby and this soon, implies that our galaxy must be teeming with billions of potentially habitable rocky planets.” 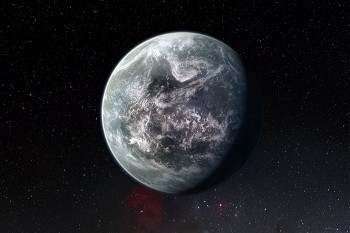 Nearby is right, and assuming we do eventually develop the technologies to send probes to distances of tens of light years out, this super-Earth would surely gain a place high on the target list. The reference to the most common stars in the galaxy is drawn from estimates that 75 to 80 percent of all stars in the Milky Way may be M-dwarfs, although the relative percentages will surely be adjusted as we get a better handle on the distribution of brown dwarfs. Vogt refers to multiple planets because in addition to the super-Earth orbiting GJ 667C, there appears to be evidence for additional planets, perhaps as many as three, orbiting the same star.

Building on earlier work on a different super-Earth in the same system (GJ 667Cb), too close to the star to allow liquid water to exist on its surface, the research team found the signature of the new planet GJ 667Cc, with an orbital period of 28.15 days and a minimum mass of 4.5 times that of Earth. Guillem Anglada-Escudé (Carnegie Institution for Science) calls the latter world “…the new best candidate to support liquid water and, perhaps, life as we know it,” though we have to add the usual caveats about flare activity on M-dwarfs and their potential for disrupting life.

Those other worlds in the same system? A possible gas giant and yet another super-Earth are candidates, but neither has been confirmed. Meanwhile, GJ 667Cc is thought to absorb about the same amount of energy from its star that the Earth draws in from the Sun, leading to the possibility of Earth-like temperatures and, if conditions are right, the potential for liquid water. As with all such results, further information about the planet and its atmosphere are needed before we can run too wild with such speculation, but GJ 667Cc clearly deserves a much closer look.

The paper is Anglada-Escudé et al., “A planetary system around the nearby M dwarf GJ 667C with at least one super-Earth in its habitable zone,” accepted at the Astrophysical Journal Letters (preprint).