SETI in the News

Let me draw your attention to two interesting stories this morning, one harking back to the night in August of 1977 when the Big Ear radio telescope at Ohio State University recorded the famous ‘Wow!’ signal. For those unfamiliar with it, the ‘Wow!’ signal gets its name from Big Ear volunteer Jerry Ehman’s annotation (several days later) on the signal’s printout. ‘Wow!’ seemed appropriate for a signal that was 30 times stronger in volume than the background noise and took up a single 10 kilohertz-wide band on the receiver, an enigmatic 70-second narrow-band burst at almost precisely 1420 megahertz, the emission frequency of hydrogen. 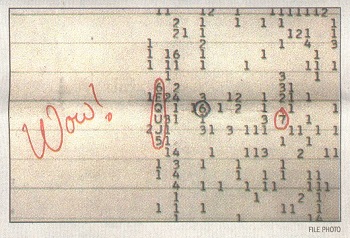 A message from an extraterrestrial civilization? ‘Wow!’ seemed to fit the bill, but it disappeared and despite more than 50 repeated searches by the Big Ear team, it never recurred. In this article for The Planetary Society, Amir Alexander calls the signal “…the single most intriguing result ever produced by the Search for Extraterrestrial Intelligence,” one made all the more frustrating because of the lack of any follow-up signal. Alexander’s story alerted me to the fact that Bob Gray, a data analyst with a passion for radio astronomy, has just published a book on the ‘Wow!’ signal based on three decades of study and observation using a wide variety of equipment.

Image: A 70-second burst that came to be known as the ‘Wow!’ signal. Credit: Columbus Dispatch.

The Elusive Wow: Searching for Extraterrestrial Intelligence (Chicago: Palmer Square Press, 2011) caught my eye not only because of ‘Wow!’ but also because of my love of travel books — Gray’s journeys in support of his SETI research have been globe-spanning. Having built a radio telescope of his own using a 12-foot dish and a steerable mount from a World War II radar installation, he began by operating his own SETI program for fifteen years, looking at the region of the spectrum and the specific coordinates where ‘Wow!’ had first appeared. Then he started expanding the hunt, traveling to the Oak Ridge Observatory near Harvard, Massachusetts.

Alexander’s article tells the tale and I won’t do anything more than hit the highlights here, but suffice it to say that Gray worked with Paul Horowitz at the observatory using a 25-meter radio telescope running META (Million Channel Extraterrestrial Array). He later went to the Very Large Array in New Mexico, whose 27 dishes mounted on rails were put at his disposal for a four hour stretch in September of 1995 (this followed a lengthy proposal submission process). Still later, he wound up in Tasmania at the Mount Pleasant Observatory, working with Simon Ellingsen.

The result: No trace of the ‘Wow!’ signal despite the presence of unknown (and presumably natural) radio sources close to where it had originated. ‘Wow!’ remains a mystery and Gray’s book will keep its tantalizing story alive as he continues his personal quest to nail it down. Alexander quotes him as calling ‘Wow!’ “ “…a pretty strong tug on the cosmic fishing line,” about as charming an image as can be imagined for this most intriguing of all SETI results to date. Gray’s book is in my reading stack and I’ll be offering my own review in the near future.

Money and Commitment at the ATA

The 42 radio telescopes of the Allen Telescope Array, located near Lassen Peak in Hat Creek, California, are one day to be joined by more than 300 more if the original plan is followed, but at the moment the installation’s financial problems are what occupies its supporters even as they continue their observations. New York Times science writer Dennis Overbye tells the tale in a late January story that looks at the ATA and its possibilities, examining what he calls “…a dream deferred by politics, a lack of money and the technological challenges of searching what astronomers call ‘the cosmic haystack’: 100 billion stars in the galaxy and 9 billion narrow-band radio channels on which aliens, if they exist, might be trying to hail us.” 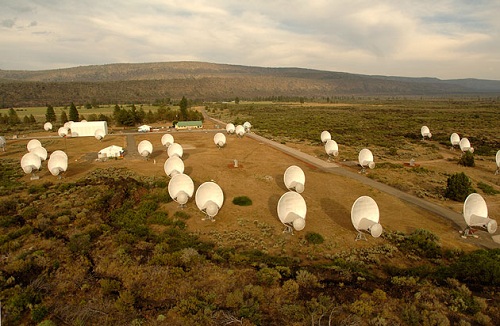 Centauri Dreams readers will recall that the University of California’s own funding for the ATA ran out last spring, sending the telescopes into forced hibernation until a funding appeal sent out over the SETI Institute’s Web site brought in enough money to fund about two more months of operations. The US Air Force is also interested in the array’s possibilities in terms of tracking satellites and space debris, an agreement that is still being negotiated. The ATA is back in business (since December), but the financial shortfalls ahead are sizable for an installation that needs $1.5 million per year for operations and another $1 million for the staff of astronomers.

Microsoft founder Paul Allen ponied up $25 million to launch the original project, which would be owned by the University of California at Berkeley as well as the SETI Institute, but fleshing out the remaining 300 or so antennas will require a cool $55 million, making the ATA a site in search of philanthropists. As Overbye recounts, SETI has never been robustly funded and has been controversial from the start, particularly with alarming price estimates like the $10 billion a 1971 NASA workshop came up with for a giant telescope array that would have been called Cyclops. The infamous 1978 ‘Golden Fleece’ award from Wisconsin senator William Proxmire only added to the problems, leading to the cancellation (in 1993) of NASA’s SETI survey work.

Taking SETI private was the only option, but the tough-minded scientists who continue this work soldier on despite the challenges. Writes Overbye:

Astronomers now know that the galaxy is teeming with at least as many planets — the presumed sites of life — as stars. Advanced life and technology might be rare in the cosmos, said Geoffrey W. Marcy, the Watson and Marilyn Alberts in the Search for Extraterrestrial Intelligence professor at the University of California, Berkeley, “but surely they are out there, because the number of Earthlike planets in the Milky Way galaxy is simply too great.”

A simple “howdy,” a squeal or squawk, or an incomprehensible stream of numbers captured by one of the antennas here at the University of California’s Hat Creek Radio Observatory would be enough to end our cosmic loneliness and change history, not to mention science. It would answer one of the most profound questions humans ask: Are we alone in the universe?

I like the way Overbye frames this story, highlighting a band of astronomers depending on “…the stubborn strength of their own dreams,” a description which goes a long way toward explaining Bob Gray’s own persistent hunt for the ‘Wow!’ signal as well. It takes passion, and a hide as tough as a Texas longhorn’s, to fight through budget shortfalls, political maneuvering and the sheer intractability of the technical problems involved in pulling an intelligent signal out of the cosmos. But things are happening again at Hat Creek and have been since December, while the question of how long the site will stay operational hovers over SETI like an ominous cloud.