“With exoplanets we are entering new territory,” says René Heller (Leibniz Institute for Astrophysics, Potsdam), talking about recent studies looking at axial tilt as a parameter for habitability on a planet. Heller is getting at the fact that while we’ve studied the axis of a planet’s spin relative to the plane of its orbit rather thoroughly here in our own Solar System, we are a long way from being able to discern the axial tilt of exoplanets, much less make definitive statements about its effect on habitability. Right now we can say something about the size, mass and orbital period of many distant planets (and in a few cases, some of the components of their atmosphere) and that’s about where our knowledge stops.

Heller imagines the Earth with an axial tilt something akin to that of Uranus, whose equator and ring system run almost perpendicular to the plane of its orbit. Introduce such high obliquity to the Earth and the north pole would point at the Sun for a quarter of the year and in the opposite direction for another three months. As the year progresses, one pole is scorched while the other freezes, and then the situation reverses. As Heller told Astrobiology Magazine in a recent story, “The hemispheres are cyclically sterilized, either by too strong irradiation or by freezing.” 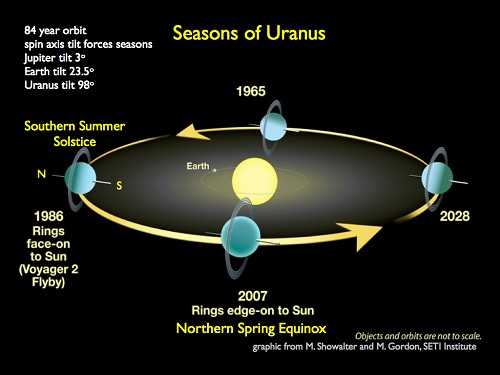 In the same article, George Williams (University of Adelaide) speculates that an axial tilt of as little as 40 degrees would provide a tough environment for complex animals because of the exceedingly hot summers and cold winters that would prevail over much of the globe. He points to evidence for high obliquity in the early Earth, arguing that it may have been a change in axial tilt to something closer to today’s 23.5 degree obliquity that prompted the explosion of lifeforms in the Cambrian era some 540 million years ago. Glacier studies may be giving us some evidence for high obliquity throughout much of Earth’s early history, though what would have altered our planet’s tilt roughly 550 to 600 million years ago to make all this happen remains a mystery.

Plants on the Early Earth

Exoplanets raise so many questions about our own planet’s past, and the obliquity issue is but one factor in all this. We can also home in on the question of plant life, examined in a recent Scientific American blog entry with the assertive title Thanks to Plants, We Will Never Find a Planet Like Earth. The story looks at an open question — how was the surface of the early Earth shaped, particularly by the waters that weathered bare rock to create the soil plants needed to thrive? Martin Gibling (Dalhousie University, Nova Scotia) and Neil Davies (University of Ghent) have analyzed sediment deposition back hundreds of millions of years.

The evolution of vascular plants with complex root systems around 450 million years ago was a major factor in drawing carbon dioxide out of the atmosphere, but Gibling and Davies think these plants were also critical in breaking down rock to form the minerals and mud that helped river banks to form. I went to their paper in Nature Geoscience to look at their views on the interplay between organisms and their physical environments (the growing discipline is called biogeomorphology). The researchers identify a series of changes in Palaeozoic fluvial systems forced by plant evolution, including the introduction of stable muddy floodplains well suited for vegetation and soil development.

The authors see plants acting as ‘geomorphic engineers,’ creating a framework for the complexity of further life:

…the development of meandering rivers with strengthened banks through the Late Silurian and Devonian promoted stable muddy floodplains partially protected by levees and highly suitable for vegetation growth and soil development, including carbonate-rich soils… Early Pennsylvanian suites of narrow fixed channels on muddy plains and of island-braided styles in sand-bed rivers imply an increased length of channel margins and riparian corridors with their varied plant communities and subsurface water prisms, which are of crucial importance for many animal species. The Devonian to Pennsylvanian development of avulsive channel systems generated abandoned channels suitable for organic occupation, especially during dry periods. Towards the sea, concomitant expansion of muddy coastal plains and deltas would have also had many biological consequences. Feedback loops are likely to have been complex.

And so on. Just how valuable was this interplay between plants and the physical environment? This entire issue of Nature Geoscience is devoted to the question, noting how many of Earth’s environmental features were brought about by the evolution of life. The effect of plants goes beyond geochemistry and extends deeply into the landscape, controlling the stability of river banks. Before plant life was ubiquitous, water flowed in broad sheets with few clearly defined channels and floodplains. The editors of the journal think this has implications for exoplanet life:

Even if there are a number of planets that could support tectonics, running water and the chemical cycles that are essential for life as we know it, it seems unlikely that any of them would look like Earth. Even if evolution follows a predictable path, filling all available niches in a reproducible and consistent way, the niches on any Earth analogue could be different if the composition of its surface and atmosphere are not identical to those of Earth. And if evolution is random, the differences would be expected to be even larger. Either way, a glimpse of the surface of an exoplanet — if we ever get one — may give us a whole new perspective on biogeochemical cycling and geomorphology.

Let’s hope that we are indeed able to get that glimpse, and a glimpse at many of the exoplanets being discovered today, particularly those in their star’s habitable zone. It’s hard to argue with the belief that evolution will take a wild variety of courses depending on initial conditions ranging from planetary atmospheres to, as we saw above, axial tilt. What we have ahead of us stretching far into the forseeable future is the chance to begin cataloguing exoplanet ecosystems that we’ll learn more about from spectroscopy and eventual imaging as we tune up our tools. We’ve already learned how wildly one planetary system can differ from another. We can only imagine the extensive range life will take, assuming it’s out there, as it fills each unique niche.

The paper is Gibling and Davies, “Palaeozoic landscapes shaped by plant evolution,” Nature Geoscience 5, 99–105 (2012), published online 01 February 2012. Thanks to my friend Antonio Tavani for the heads-up on this paper and the related story from Scientific American.