A ‘Super-Oort’ Cloud at Galactic Center?

Not long ago we looked at comet C/2011 N3 (SOHO), discovered last July just two days before it plunged into the Sun, evaporating some 100,000 kilometers above the solar surface. It was startling to learn that the SOHO observatory is tracking numerous ‘Sun-grazers,’ comets whose fatal encounters with our star are occurring roughly once every three days. Now comes news that Sagittarius A*, the supermassive black hole at the center of the Milky Way, is producing X-ray flares about once a day, thought by some to be the result of similar debris in the process of destruction.

The flares last just a few hours, according to researchers working with data from the Chandra X-Ray Observatory, and can reach brightness levels up to 100 times what is normally observed in the black hole region. Kastytis Zubovas (University of Leicester) thinks we’re seeing asteroids and comets passing within 160 million kilometers of the black hole (roughly 1 AU), at which point they would likely be broken apart by tidal forces and eventually vaporized as they move through the hot, thin gas surrounding and feeding Sgr A*.

“As a reality check, we worked out that a few trillion asteroids should have been removed by the black hole over the 10-billion-year lifetime of the galaxy,” said co-author Sera Markoff of the University of Amsterdam in the Netherlands. “Only a small fraction of the total would have been consumed, so the supply of asteroids would hardly be depleted.” 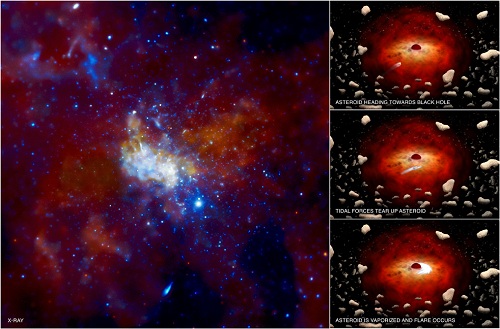 Image (click to enlarge): The panel on the left is an image containing nearly a million seconds of Chandra observing of the region around the black hole, with red representing low-energy X-rays, green as medium-energy X-rays, and blue being the highest. An asteroid that undergoes a close encounter with another object, such as a star or planet, can be thrown into an orbit headed towards Sgr A*, as seen in a series of artist’s illustrations beginning with the top-right panel. If the asteroid passes within about 100 million miles of the black hole, roughly the distance between the Earth and the Sun, it would be torn into pieces by the tidal forces from the black hole (middle-right panel). These fragments would then be vaporized by friction as they pass through the hot, thin gas flowing onto Sgr A*, similar to a meteor heating up and glowing as it falls through Earth’s atmosphere. A flare is produced (bottom-right panel) and eventually the remains of the asteroid are swallowed by the black hole. Credit: X-ray: NASA/CXC/MIT/F. Baganoff et al.; Illustrations: NASA/CXC/M.Weiss.

To generate flares large enough for Chandra to see, the objects in question would have to be roughly 10 kilometers in radius or larger. These are relatively small events compared to what might happen when an entire star passed too close to a supermassive black hole, which would power a spectacularly bright flare of the kind that has been observed in other galaxies. But disintegrating stars are thought to be rare, while the Chandra flares are common, and last only hours compared to the larger events, which can be studied for a period of months.

Zubovas and team have developed a model that looks at the asteroid population passing near Sagittarius A*, one that offers criteria for testing whether a given flare is the result of an external object encountering the black hole or the result of instabilities within the accretion disk already around it. From the paper:

The least constrained parts of the model have to do with the exact distribution of asteroids and their orbits in the hypothesised ”Super-Oort cloud” around Sgr A* and with conversion of the bulk kinetic energy of the asteroids into electromagnetic radiation. However, there almost certainly are asteroids in the central few pc of the Galaxy and the processes described here must occur. Our paper makes several estimates of the eﬀects that asteroids have on the luminosity of Sgr A* and suggests a method to distinguish between such externally caused ﬂares and accretion-instability caused ones. If future observations reveal that asteroid disruptions are responsible for at least a fraction of the ﬂares, this would be an important step in understanding the accretion processes in Sgr A*. In addition, further investigation may help constrain the size of the asteroid population in the Galactic centre.

So we’re looking at what can be called a ‘Super-Oort’ cloud, a thick torus of asteroids stripped from their parent stars that surrounds our galaxy’s supermassive black hole. Interestingly enough, the Chandra data fall in line with earlier work suggesting that this cloud of asteroids and planets may have formed through star formation episodes inside the massive accretion disk itself, during phases when the black hole grew rapidly. The asteroids would be drawn from this cloud of stars whenever one of the stars passed too close to the black hole. Where Zubovas’ team differs from some earlier theorists is in seeing the Chandra flares as the result of asteroid interactions with the black hole rather than stars, the latter being of insufficient density to produce the small and frequent flares we see happening in the region of Sgr A*.

The paper is Zubovas et al., “Sgr A* flares: tidal disruption of asteroids and planets?” accepted for publication in Monthly Notices of the Royal Astronomical Society (preprint).