Given yesterday’s post on wandering planets, otherwise known as ‘rogue’ planets or ‘nomads,’ today’s topic falls easily into place. For even as we ponder the possibility of 105 rogue planets at Pluto’s mass or above for every main sequence star in the galaxy, we confront the fact that we still have much to learn about objects much closer to home in our own Kuiper Belt. We have yet, for example, to have a flyby, although it’s possible the New Horizons spacecraft will line up on a useful target after its encounter with Pluto/Charon (and yes, it’s conceivable that Triton is a captured KBO, and thus we have had a Voyager flyby). The discovery of objects like Sedna, Makemake and Eris makes it clear how much we may yet uncover.

We can think of the broader category of Trans-Neptunian Objects (TNOs) in terms of potential mission targets, but we should also ponder the fact that their strong dynamical connection with the planets can help us gain insight into the mechanics of Solar System and planet formation. This is what Scott Sheppard (Carnegie Institution of Washington) and colleagues have in mind as they present the results of a southern sky survey for bright Kuiper Belt objects. Centauri Dreams reader Joseph Kittle gave me the heads-up on this interesting work, which notes that the Kuiper Belt, as a remnant of the original protoplanetary disk, contains what the authors call a ‘fossilized’ record of the original solar nebula and the development of the Solar System. 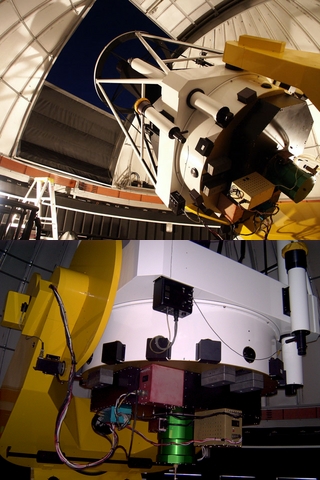 We’ve had earlier TNO surveys of northern hemisphere skies using the Palomar 48-inch Schmidt telescope (hence the discovery of the aforementioned Eris, as well as Haumea, Quaoar, Orcus and others). But the southern hemisphere has been tougher to survey because of the lack of wide-field digital imagers on suitable equipment there. It was the installation of just such an imager at Las Campanas in Chile that allowed the OGLE-Carnegie Kuiper Belt Survey (OCKS) to take place, one of the first large-scale southern sky and galactic plane surveys aimed at detecting bright Kuiper Belt Objects beyond the orbit of Neptune using state of the art digital CCD detectors. A second survey began in 2009 using the Schmidt telescope at La Silla.

Eighteen outer Solar System objects were detected in the survey, including fourteen that were new discoveries, an indication of how little this region of the sky has been searched for TNOs in the past. It’s interesting here to recall the definition of a ‘dwarf planet,’ defined by the IAU as an object that is in hydrostatic equilibrium and has not cleared the neighborhood around its orbit of other objects of similar size. It’s an imprecise definition, say the authors, but Pluto and Eris are clearly dwarf planets, while Makemake and Haumea most likely also qualify, and we’ll probably find that Sedna, 2007 OR10, Orcus, and Quaoar fit here as well.

The trick is figuring out what the lower size limit of an object in hydrostatic equilibrium really is, with some research indicating it could be as small as 200 kilometers in radius. That would put many more outer system objects into contention as dwarf planets, including three that were discovered in this survey, although at present the actual size and shape of these bodies will require further work to pin down with precision. Newly discovered 2010 KZ39 is particularly interesting, a possible member of the Haumea family based on its orbit. The authors have this to say about larger bodies in what we can call the classic Kuiper Belt (internal citations omitted for brevity, but of course you can find them in the online paper):

The actual number of Pluto-sized bodies is now known. Previous authors have argued that the Kuiper Belt likely lost a substantial amount of its mass through collisional grinding and dynamical interactions with the planets. Observationally, many more objects appear to be required in order to produce the observed angular momentum of the largest KBOs and binaries. Detailed simulations show that Kuiper Belt formation is possible with only the small number of Pluto-sized objects observed. A signiﬁcant number of Pluto sized objects likely exist in the populations beyond 100 AU such as the Sedna types and Oort Cloud objects, which are currently too faint to be efﬁciently detected to date. It is important to determine if the Pluto-sized objects formed in the Kuiper Belt as we see it today or if they originated much closer to the Sun and were later transported to their current orbits.

So take note: Beyond the Kuiper Belt itself, there may exist at several hundred AU or more other large objects even of Pluto or Mercury-size, and perhaps large objects in Sedna-like orbits. The OCKS survey found no Sedna-class objects within the 300 AU region to which it was sensitive, and it may be that a survey like Pan-STARRS will have a better chance to detect such objects because it has the capability of working with fainter magnitudes than OCKS. We’ll also need the services of the Large Synoptic Survey Telescope to probe the TNO population more deeply.

It’s heartening to ponder the authors’ conclusion that we are making serious progress on the Kuiper Belt, with complete surveys now for objects 80 kilometers in radius out to 30 AU, and 225 kilometers in radius out to 50 AU. Beyond a few hundred AU, much remains to be done. Given the gaps in our knowledge as we move out toward the inner Oort Cloud, it’s clear how many discoveries await us in this region of space comparatively close to home compared to the interstellar distances we one day hope to travel. The relatively simple vision of the Solar System many of us grew up with has rapidly given way to a system surrounded and permeated by rocky and cometary debris, with dwarf planets in unknown numbers far from the central star.