A Haze at Galactic Center

The Planck mission continues to peel the layers off the onion as it probes the early universe. Planck is all about the Cosmic Microwave Background (CMB), that radiation left over from the era of recombination around 380,000 years after the Big Bang. As electrons and protons began to form neutral atoms, light was freed to stream through the universe, an afterglow of the Big Bang that missions like the Wilkinson Microwave Anisotropy Probe have studied in detail, and which Planck will now observe at still better sensitivity, angular resolution and frequency range.

But the initial job for researchers is to remove sources of foreground emission to reveal the CMB itself, and that process is turning up interesting findings in its own right. The latest announcement from the European Space Agency involves a haze of microwaves that is not yet understood. Coming from the region around galactic center, the haze appears to be synchrotron emission, produced as electrons accelerated in supernovae explosions pass through magnetic fields. So far so good, but this synchrotron emission does not fall off as rapidly at increasing energies as the synchrotron emission that can be observed elsewhere in the Milky Way.

What Planck has found is an enormous field of haze spanning some 35,000 light years. The problem: Supernovae don’t make enough electrons and positrons at high energy to fill the volume taken up by the Planck haze, according to Gregory Dobler (UC Santa Barbara):

“There are many possibilities and theories, ranging from Galactic winds to a jet generated by the black hole at the center of our Galaxy to exotic physics related to dark matter. The problem is that the picture that has emerged with the Planck data, as well as the Fermi data, challenges all of the explanations. There is no Goldilocks theory yet. None of them fit the data just right.”

The fact that early explanations for the haze are all over the map tells us how little we understand what is going on here — one theory invokes the annihilation of dark matter particles, while others involve higher supernova rates in the early universe. ESA’s Jan Tauber, project scientist for Planck, will only say that the galactic haze result is ‘interesting,’ which basically says we’re still in the dark. Tauber goes on to say “The lengthy and delicate task of foreground removal provides us with prime datasets that are shedding new light on hot topics in galactic and extragalactic astronomy alike.” True enough, and the biggest Planck findings are surely ahead. 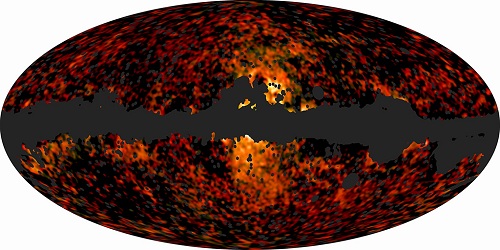 Image: This all-sky image shows the spatial distribution over the whole sky of the Galactic Haze at 30 and 44 GHz, extracted from the Planck observations. In addition to this component, other foreground components such as synchrotron and free-free radiation, thermal dust, spinning dust, and extragalactic point sources contribute to the total emission detected by Planck at these frequencies. The prominent empty band across the plane of the Galaxy corresponds to the mask that has been used in the analysis of the data to exclude regions with strong foreground contamination due to the Galaxy’s diffuse emission. The mask also includes strong point-like sources located over the whole sky. Credit: ESA/Planck Collaboration.

Planck’s carbon monoxide map is also noteworthy and a major addition to ground-based carbon monoxide surveys, which are complicated and lengthy enough to restrict our observation. Planck is scanning the entire sky for this constituent of the cold clouds, made predominately of hydrogen, that become the birthplace of stars. The spacecraft is finding previously undiscovered clouds that will all go into the overview of cosmic structure scientists anticipate from the mission. And once these foreground materials are accounted for, we will see the real prize, the Cosmic Microwave Background viewed through an instrument sensitive to temperature variations of a few millionths of a degree and capable of mapping the full sky over nine wavelength bands.

The questions Planck is investigating are among the most pressing in cosmology. Here are the mission goals as found in this European Space Agency backgrounder:

The inflation question is particularly interesting and much on my mind as I read Roger Penrose’s new book Cycles of Time (Knopf, 2011), which takes a controversial look at inflation that we’ll be talking about down the road. The Planck results thus far were announced this week in Bologna at a conference devoted to the mission, with publication pending in Astronomy & Astrophysics. ESA is now saying that the first Planck cosmological dataset is to be released next year.