HLX-1 (Hyper-Luminous X-ray source 1) is thought to be a black hole, one that’s a welcome discovery for astronomers trying to puzzle out the mysteries of black hole formation. Located roughly 290 million light years from Earth and situated toward the edge of a galaxy called ESO 243-49, this black hole looks to be some 20,000 times the mass of the Sun, which makes it mid-sized when compared with the supermassive black holes at the center of many galaxies. The latter can have masses up to billions of times more than the Sun — the black hole at the center of our own galaxy is thought to comprise about four million solar masses.

Just how a supermassive black hole forms remains a subject for speculation, but study of HLX-1 is giving us clues that point in the direction of a series of mergers of small and mid-sized black holes. For it turns out that HLX-1, discovered by Sean Farrell (Sydney Institute for Astronomy in Australia and University of Leicester, UK) and team at X-ray wavelengths, shows evidence for a cluster of young, hot stars surrounding the black hole itself. Working in ultraviolet, visible and infrared light using the Hubble instrument as well as in X-rays using the Swift satellite, the team found that the accretion disk alone could not explain the emissions they were studying.

All of this leads to an interesting supposition about the black hole’s origins, as Farrell notes:

“The fact that there’s a very young cluster of stars indicates that the intermediate-mass black hole may have originated as the central black hole in a very low-mass dwarf galaxy. The dwarf galaxy was then swallowed by the more massive galaxy.” 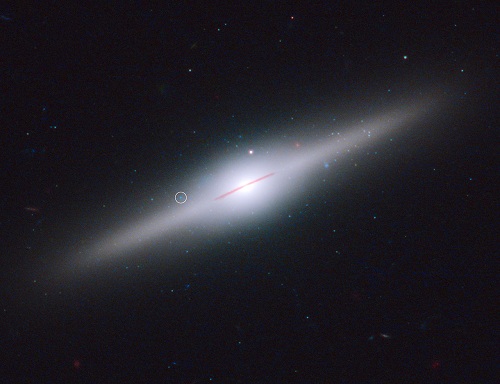 Image: This spectacular edge-on galaxy, called ESO 243-49, is home to an intermediate-mass black hole that may have been purloined from a cannibalised dwarf galaxy. The black hole, with an estimated mass of 20,000 Suns, lies above the galactic plane. This is an unlikely place for such a massive back hole to exist, unless it belonged to a small galaxy that was gravitationally torn apart by ESO 243-49. The circle identifies a unique X-ray source that pinpoints the black hole. Credit: NASA, ESA, and S. Farrell (University of Sydney, Australia and University of Leicester, UK).

The cluster of young stars appears to be about 250 light years across and encircles the black hole. We may be looking, then, at the remains of a galaxy that has been effectively destroyed by its collision with another galaxy, while the black hole at the dwarf’s center interacted with enough gaseous material to form the new stars. Farrell and Mathieu Servillat (Harvard-Smithsonian Center for Astrophysics) peg the cluster’s age at less than 200 million years, meaning that most of these stars would have formed after the dwarf’s collision with the larger galaxy. Says Servillat:

“This black hole is unique in that it’s the only intermediate-mass black hole we’ve found so far. Its rarity suggests that these black holes are only visible for a short time.”

The paper on this work discusses the process in greater detail:

Tidally stripping a dwarf galaxy during a merger event could remove a large fraction of the mass from the dwarf galaxy, with star formation triggered as a result of the tidal interactions. This could result in the observed IMBH [intermediate mass black hole] embedded in the remnant of the nuclear bulge and surrounded by a young, high metallicity, stellar population. It has been proposed that such accreted dwarf galaxies may explain the origin of some globular clusters, with the remnant cluster appearing more like a classical globular cluster as its stellar population ages.

HLX-1’s X-ray signature is still relatively bright (which is how Farrell found it in 2009 using the European Space Agency’s XMM-Newton X-ray space telescope). But as it depletes the supply of gas around it, the black hole’s X-ray signature will weaken. Its ultimate fate may indeed be to spiral into the center of ESO 243-49, to merge with the supermassive black hole there. Consider intermediate-sized black holes like this one the ‘missing link’ between stellar mass black holes and their supermassive counterparts at galactic center. The nuclei of dwarf galaxies (along with globular clusters) have previously been suggested as the likely environments for their formation, ideas which are given powerful support through the study of what’s happening in ESO 243-49.