Robotic Networks Among the Stars

Imagine a future in which we manage to reach average speeds in the area of one percent of the speed of light. That would make for a 437-year one-way trip to the Alpha Centauri system, too long for anything manned other than generation ships or missions with crews in some kind of suspended animation. Although 0.01c is well beyond our current capabilities, there is absolutely nothing in the laws of physics that would prevent our attaining such velocities, assuming we can find the energy source to drive the vehicle. And because it seems an achievable goal, it’s worth looking at what we might do with space probes and advanced robotics that can move at such velocities.

How, in other words, would a spacefaring culture use artificial intelligence and fast probes to move beyond its parent solar system? John Mathews ( Pennyslvania State) looks at the issue in a new paper, with a nod to the work of John von Neumann on self-reproducing automata and the subsequent thoughts of Ronald Bracewell and Frank Tipler on how, even at comparatively slow (in interstellar terms) speeds like 0.01c, such a culture could spread through the galaxy. There are implications for our own future here, but also for SETI, for Mathews uses the projected human future as a model for what any civilization might accomplish. Assume the same model of incremental expansion through robotics and you may uncover the right wavelengths to use in observing an extraterrestrial civilization, if indeed one exists. 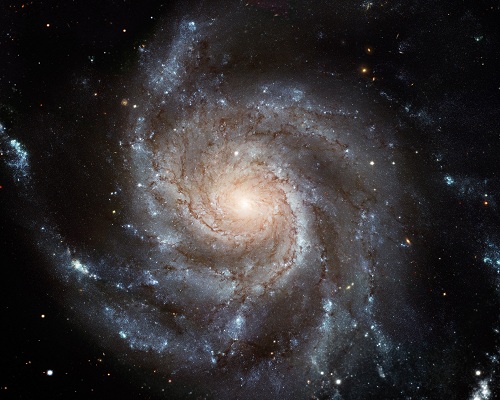 Image: The spiral galaxy M101. If civilizations choose to build them, self-reproducing robotic probes could theoretically expand across the entire disk within a scant million years, at speeds well below the speed of light. Credit: STScI.

But let’s leave SETI aside for a moment and ponder robotics and intelligent probes. Building on recent work by James and Gregory Benford on interstellar beacons, Mathews likewise wants to figure out the most efficient and cost-effective way of exploring nearby space, one that assumes exploration like this will proceed using only a small fraction of the Gross Planetary Product (GPP) and (much later) the Gross Solar System Product (GSSP). The solution, given constraints of speed and efficiency, is the autonomous, self-replicating robot, early versions of which we have already sent into the cosmos in the form of probes like our Pioneers and Voyagers.

The role of self-replicating probes — Mathews calls them Explorer roBots, or EBs — is to propagate throughout the Solar System and, eventually, the nearby galaxy, finding the resources needed to produce the next generation of automata and looking for life. Close to home, we can imagine such robotic probes moving at far less than 0.01c as they set out to do something targeted manned missions can’t accomplish, reaching and cataloging vast numbers of outer system objects. Consider that the main asteroid belt is currently known to house over 500,000 objects, while the Kuiper Belt is currently thought to have more than 70,000 100-kilometer and larger objects. Move into the Oort and we’re talking about billions of potential targets.

A wave of self-reproducing probes (with necessary constraints to avoid uninhibited growth) could range freely through these vast domains. Mathews projects forward not so many years to find that ongoing trends in computerization will allow for the gradual development of the self-sufficient robots we need, capable of using the resources they encounter on their journeys and communicating with a growing network in which observations are pooled. Thus the growth toward a truly interstellar capability is organic, moving inexorably outward through robotics of ever-increasing proficiency, a wave of exploration that does not need continual monitoring from humans who are, in any case, gradually going to be far enough away to make two-way communications less and less useful.

[Addendum: By using ‘organic’ above, I really meant to say something like ‘the growth toward a truly interstellar capability mimics an organic system…’ Sorry about the confusing use of the word!]

The number of objects comprising our solar system requires autonomous robotic spacecraft to visit more than just a few. As the cost of launching sufficient spacecraft from earth would quickly become prohibitive, it would seem that these spacecraft would necessarily be or become self-replicating systems. Even so, the number of robots needed to thoroughly explore the solar system on even centuries timescales is immense. These robots would form the prototype EBs (proto-EB) and would ultimately explore out to the far edge of the Oort Cloud.

The robotic network is an adjunct to manned missions within the Solar System itself, but includes the capability of data return from regions that humans would find out of reach:

These proto-EBs would also likely form a system whereby needed rare resources are mined, processed, and transported inward while also providing the basis for our outward expansion to the local galaxy. EB pioneering activities would also likely be used to establish bases for actual human habitation of the solar system should economics permit. Additionally, this outward expansion would necessarily include an efficient and cost effective, narrow-beam communications system. It is suggested that any spacefaring species would face these or very similar issues and take this or a similar path.

Note that last suggestion. It’s gigantic in its consequences, but Mathews is trying to build upon what we know — civilizations with technologies that allow them to operate outside this paradigm are an illustration of why SETI must necessarily cast a wide net. Even so, EB networks offer an area of SETI spectrum that hasn’t been well investigated, as we’ll see in tomorrow’s post.

To analyze how a robotic network like what the paper calls the Explorer Network (ENET) might be built and what it would need to move from the early proxy explorers like Voyager to later self-reproducing prototypes and then a fully functional, expansive network, Mathews explores the various systems that would be necessary and relates these to what an extraterrestrial civilization might do in a similar exploratory wave. In doing this, he reflects thinking like Frank Tipler’s, the latter having argued that colonizing the entire galactic disk using these methods would involve a matter of no more than a million years. Note that both Mathews and Tipler see the possibility of intelligence spreading throughout the galaxy with technologies that work well within the speed of light limitation. Extraterrestrial civilizations need not be hyper-advanced. “In fact,” says Mathews, “it seems possible that we have elevated ET far beyond what seems reasonable.”

This is an absorbing paper laced with ingenious ideas about how a robotic network among the stars would work, including thoughts on propulsion and deceleration, the survival of electronics in long-haul missions, and the ethics and evolution of our future robot explorers. Tomorrow I want to continue with Mathews’s concepts to address some of these questions and their implications for the Fermi paradox and SETI. For now, the paper is Mathews, “From Here to ET,” Journal of the British Interplanetary Society 64 (2011), pp. 234-241.