It was back in the 1980s when Robert Freitas came up with a self-reproducing probe concept based on the British Interplanetary Society’s Project Daedalus, but extending it in completely new directions. Like Daedalus, Freitas’ REPRO probe would be fusion-based and would mine the atmosphere of Jupiter to acquire the necessary helium-3. Unlike Daedalus, REPRO would devote half its payload to what Freitas called its SEED package, which would use resources in a target solar system to produce a new REPRO probe every 500 years. Probes like this could spread through the galaxy over the course of a million years without further human intervention.

A Vision of Technological Propagation

I leave to wiser heads than mine the question of whether self-reproducing technologies like these will ever be feasible, or when. My thought is that I wouldn’t want to rule out the possibility for cultures significantly more advanced than ours, but the question is a lively one, as is the issue of whether artificial intelligence will ever take us to a ‘Singularity,’ beyond which robotic generations move in ways we cannot fathom. John Mathews discusses self-reproducing probes, as we saw yesterday, as natural extensions of our early planetary explorer craft, eventually being modified to carry out inspections of the vast array of objects in the Kuiper Belt and Oort Cloud. 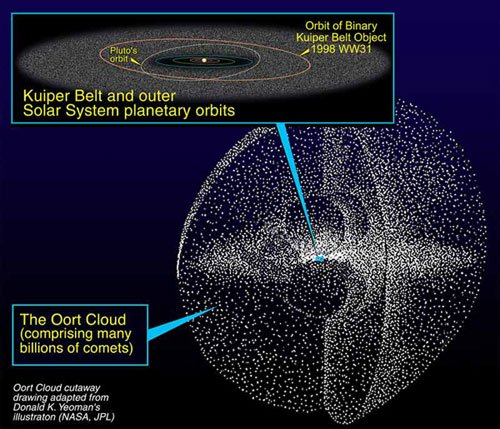 Image: The Kuiper Belt and much larger Oort Cloud offer billions of targets for self-reproducing space probes, if we can figure out how to build them. Credit: Donald Yeoman/NASA/JPL.

Here is Mathews’ vision, operating under a System-of-Systems paradigm in which the many separate systems needed to make a self-reproducing probe (he calls them Explorer roBots, or EBs) are examined separately, and conceding that all of them must be functional for the EB to emerge (the approach thus includes not only the technological questions but also the ethical and economic issues involved in the production of such probes). Witness the probes in operation:

The data network — what Mathews calls the Explorer Network, or ENET — has clear SETI implications if you buy the idea that self-reproducing probes are not only possible (someday) but also likely to be how intelligent cultures explore the galaxy. Here the assumption is that extraterrestrials are likely, as we have been thus far, to be limited to speeds far below the speed of light, and in fact Mathews works with 0.01c as a baseline. If EBs are an economical and efficient way to exploring huge volumes of space, then the possibility of picking up the transmissions linking them into a network cannot be ruled out. Mathews envisages them building a library of their activities and knowledge gained that will eventually propagate back to the parent species.

Here we can give a nod to the existing work on extending Internet protocols into space, the intent being to connect remote space probes to each other, making the download of mission data far more efficient. Rather than pointing an enormous dish at each spacecraft in turn, we point at a spacecraft serving as the communications hub, downloading information from, say, landers and atmospheric explorers and orbiters in turn. Perhaps this early interplanetary networking is a precursor to the kind of networks that might one day communicate the findings of interstellar probes. Mathews notes the MESSENGER mission to Mercury, which has used a near-infrared laser ranging system to link the vehicle with the NASA Goddard Astronomical Observatory at a distance of 24 million kilometers (0.16 AU) as an example of what is feasible today.

Tomorrow’s ENET would be, in the author’s view, a tight-beam communications network. In SETI terms, such networks would be not beacons but highly directed communications, greatly compromising but not eliminating our ability to detect them. Self-reproducing probes propagating from star to star — conceivably with many stops along the way — would in his estimation use mm-wave or far-IR lasers, communicating through highly efficient and highly directive beams. From the paper:

Working the math, Mathews finds that current technologies for laser communications yield reasonable photon counts out to the near edge of the Oort Cloud, given optimistic assumptions about receiver noise levels. It is enough, in any case, to indicate that future technologies will allow networked probes to communicate from one probe to another over time, eventually returning data to the source civilization. An extraterrestrial Explorer Network like this one thus becomes a SETI target, though not one whose wavelengths have received much SETI attention.

On Ethics and Possibilities

In any case, there is no reason why an exploring extraterrestrial culture would necessarily want its activities to be noticed. Rather than eavesdropping on leakage from an extremely efficient communications network, a more likely SETI outcome would involve human expansion through gradually more autonomous probes, with the chances of finding evidence for ET expanding as our own sphere of exploration widens. Getting a positive SETI result might thus involve centuries if not millennia.

It may also be the case that reproducing probes are severely restricted out of ethical concerns. Runaway propagation poses many dilemmas, so that few if any cultures build them. A null result might also indicate that their development is more difficult and expensive than anticipated, particularly in terms of finding needed energy sources.

How would we track narrow-beam communications systems in the mm-wave/IR region? As some commenters on yesterday’s post have already noted, they would likely be spread-spectrum, but there are tools for handling such signals. More on this, and on the ethics issues as well, tomorrow. Here again is the citation for the Mathews paper: “From Here to ET,” Journal of the British Interplanetary Society 64 (2011), pp. 234-241. For more on Robert Freitas’ REPRO ideas, see his paper “A Self-Reproducing Interstellar Probe,” JBIS 33 (July 1980), pp. 251-264.