Let’s imagine for a moment that John Mathews (Pennsylvania State University) is right in theorizing that space-faring civilizations will use self-reproducing probes to expand into the galaxy. We’ve been kicking the issues around most of this week, but the SETI question continues to hang in the background. For if there really are extraterrestrial civilizations in the nearby galaxy, how would we track down their signals if they used the kind of communications network Mathews envisions, one in which individual probes talked to each other through tight-beam laser communications designed only for reception by the network itself?

One problem is that the evidence we’re looking for would most likely come in the form of spread-spectrum signals, a fact Jim Benford pointed out in a comment to my original post on Mathews, and one that also pointed to recent work by David Messerschmitt (UC-Berkeley). The latter makes a compelling case for spread-spectrum methods as the basis for interstellar communication because such signals are more robust in handling radio-frequency interference (RFI) of technological origin. In SETI terms, RFI is a major issue because it mimics the interstellar signal we are hoping to find, and Messerschmitt assumes an advanced civilization, having experienced RFI issues in its own past, will use the best tools to minimize them. 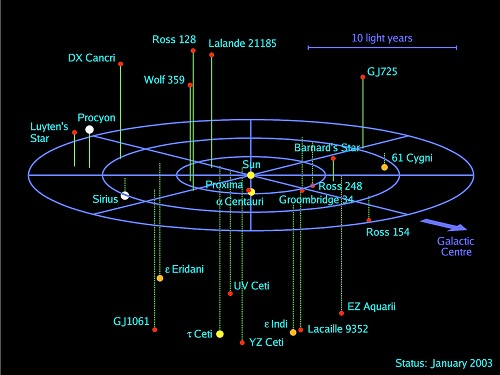 Image: 3D map of all known stellar systems in the solar neighbourhood within a radius of 12.5 light-years. Can we build self-reproducing probes that could explore these systems over the course of millennia? If other civilizations did the same, could we detect them? Credit: ESO/R.-D.Scholz et al. (AIP).

Spread-spectrum techniques spread what would have been narrowband information signals over a wide band of frequencies. Think of the kind of ‘frequency hopping’ deployed in World War II, where a transmitter would work at multiple frequencies and the receiver would need to tune in to each of the transmitted frequencies. In addition to being resistant to interference, the method allows you to resist enemy jamming of your communications or to conceal communications in what would otherwise seem to be white noise. Actress Hedy Lamarr and composer George Antheil developed a frequency hopping technique that made radio-guided munitions much harder for enemy forces to jam, a spread-spectrum story entertainingly told in a recent book (Richard Rhodes’ Hedy’s Folly: The Life and Breakthrough Inventions of Hedy Lamarr, the Most Beautiful Woman in the World, 2011). Lamarr and Antheil’s system used 88 different carrier frequencies.

Messerschmitt isn’t talking about probes but about one civilization trying to reach another — he works from the perspective of the transmitter designer trying to reach a receiver about which little can be known. From the paper:

The transmitter can…explicitly design a transmit signal that minimizes the effect of RFI on the receiver’s discovery and detection probabilities in a robust way; that is, in a way that provides a constant immunity regardless of the nature of the RFI. It is shown that the resulting immunity increases with the product of time duration and bandwidth, and that the signal should resemble statistically a burst of white noise. Intuitively this is advantageous because RFI resembles such a signal with a likelihood that decreases exponentially with time-bandwidth product. Both a transmitter and receiver designer using this optimization criterion and employing the tools of elementary probability theory will arrive at this same conclusion. Although the context is different, variations on this principle inform the design of many modern widely deployed terrestrial digital wireless communication systems, so this has been extensively tested in practice and is likely to have a prominent place in the technology portfolio of an extraterrestrial civilization as well.

We’ve learned a great deal about dealing with RFI, especially given the rapid growth of wireless communications here on Earth, and we’ve also learned more about how radio signals propagate in the interstellar medium, thanks in large part, Messerschmitt notes, to advances in pulsar astronomy. Couple this with the ever-quickening pace of electronics and computer development and the search technologies in play are expanded so that we can accommodate the problem of natural noise sources as well as our own RFI. And we would have to assume that any extraterrestrial civilization would employ RFI mitigation techniques in its own communications.

In the case of accidental interception of a signal beamed between two intelligent probes, we can also look at the issue in terms of our detection algorithms. Early SETI work involved the so-called Fourier Transform to search for comparatively narrowband signals, and moved in the 1960s to the Fast Fourier Transform as the tool of choice. But as François Biraud noted as early as 1982, our terrestrial move from narrow-band to broader bandwidth communications presents a new challenge, breaking information into chunks carried by frequency-shifting carrier waves. Claudio Maccone has long argued that FFT methods are inappropriate for this kind of signal.

Enter the Karhunen–Loève Theorem (KLT) that Maccone continues to champion, a way of improving our sensitivity to an artificial signal that can dig tricky spread spectrum signals out of the background noise. Whether or not KLT algorithms are put to work with new installations like the Square Kilometer Array remains to be seen, but arguments like Messerschmitt’s point to the viability of spread-spectrum methods as a prime choice for interstellar communications. The point, then, is that spread-spectrum modulation is a factor we can deal with, allowing us to incorporate Messerschmitt’s ideas into our SETI toolkit even as we ponder the circumstances that might lead an extraterrestrial civilization to deploy a network of self-reproducing probes.

The Messerschmitt paper is “Interstellar Communication: The Case for Spread Spectrum” (preprint), while the Mathews paper is “From Here to ET,” Journal of the British Interplanetary Society 64 (2011), pp. 234-241. I have more to say about all this, and particularly about the ethical issues raised by self-reproducing technologies, but I’m running out of time this morning. The discussion continues tomorrow, when I’ll ponder how a civilization like ours might accidentally run into a network of extraterrestrial probes, and what that encounter might look like.