Thoughts on Antihydrogen and Propulsion

Normally when we talk about interstellar sail concepts, we’re looking at some kind of microwave or laser beaming technologies of the kind Robert Forward wrote about, in which the sail is driven by a beam produced by an installation in the Solar System. Greg and Jim Benford have carried out sail experiments in the laboratory showing that microwave beaming could indeed drive such a sail. But Steven Howe’s concept, developed in reports for NASA’s Institute for Advanced Concepts, involved antimatter released from within the spacecraft. The latter would encounter a sail enriched with uranium-235 to reach velocities of well over 100 kilometers per second.

That’s fast enough to make missions to the nearby interstellar medium feasible, and it points the way to longer journeys once the technology has proven itself. But everything depends upon storing antihydrogen, which is an antimatter atom — an antiproton orbited by a positron. Howe thinks the antihydrogen could be stored in the form of frozen pellets, these to be kept in micro-traps built on integrated circuit chips that would contain the antihydrogen in wells spaced at periodic intervals, allowing pellets to be discharged to the sail on demand. The storage method alone makes for fascinating reading, and you can find it among the NIAC reports online.

Of course, we have to create the antihydrogen first, a feat achieved back in 2002 at CERN through the mixing of cold clouds of positrons and antiprotons. And it goes without saying that before we get to the propulsion aspect of antihydrogen, we have to go to work on the differences between hydrogen and antihydrogen, while investigating the various kinds of long-term storage options that might be used for antimatter. Does antihydrogen have the same basic properties as hydrogen? CERN is moving on to study the matter, with new work showing the amount of energy needed to change the spin of antihydrogen’s positrons. 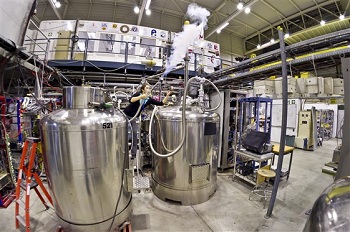 “When that happens, it goes from being trapped like a marble in a bowl to being repelled, like a marble on top of a hill,” Dr Hangst explained.

“It wants to ‘roll away’, and when it does that, it encounters some matter and annihilates, and we detect the fact that it disappears.”

The work is part of a much larger program that will probe antihydrogen with laser light, the goal being to explore the energy levels within antihydrogen. What the work may eventually uncover, perhaps in addition to tuning up our methods of antihydrogen storage along the way, is whether there are clues in the makeup of antihydrogen that explain why the universe is filled with matter and not its opposite, given that both matter and antimatter existed in equal amounts in the earliest moments of the universe. The light emitted as an excited electron returns to its resting orbit is well studied in hydrogen and assumed to be identical in its antihydrogen counterpart.

These are early results that promise much, but the important thing is that the ALPHA team has demonstrated that their apparatus has the capability of making these measurements on antihydrogen. Uncovering the antihydrogen spectrum will take further work but could prove immensely useful in our understanding of the simplest anti-atom. We’re a long way from the antimatter sail concept, but Howe’s Phase II report at NIAC covered his own experiments with antiprotons and uranium-laden foils, critical work for fleshing out the architecture for a mission that may one day fly once we’ve mastered antihydrogen storage and learned to produce the needed milligrams of antimatter (current global production is measured in nanograms per year).

Antimatter’s promise has always been bright, given that 10 milligrams of the stuff used in an antiproton engine (not Howe’s sail) heating hydrogen through antimatter annihilation would produce the equivalent of 120 tons of hydrogen/liquid oxygen chemical fuel. But as soon as you start talking about the energy involved, the difficulty in producing and storing antimatter puts a damper on the entire conversation. That’s one reason why, at a time when antimatter costs in the neighborhood of $100 trillion per gram, finding natural antimatter sources in space is such an interesting possibility. It was just last year that we learned about the inner Van Allen belts’ roll in trapping natural antimatter, and James Bickford (Draper Laboratory, Cambridge MA) has been examining more abundant sources farther out in the Solar System.