We’ve been looking at slowing down a starship, pondering ways the interstellar medium itself might be of use, and seeing how the stellar wind produced by the destination star could slow a magsail. A large solar sail could use stellar photons, but the advantage of the magsail is that it’s going to be effective at a greater distance, and we can also consider other trajectory-bending effects like the Lorentz turning studied by Robert Forward and P.C. Norem. But if you take a look at the relevant papers on magsails and other uses of the medium, you’ll find that they all assume the interstellar medium is more or less uniform. We know, of course, that it is not.

For one thing, the Sun itself seems to be near the boundary of the Local Interstellar Cloud, and there are a number of such clouds within about 5 parsecs of the Solar System. In fact, we’re not exactly sure whether the Sun is just outside the LIC or barely within it. In any case, as Ian Crawford has pointed out, Centauri A and B appear to be outside of the LIC in the direction of the G cloud, yet another denser region of the local interstellar medium. Although Robert Bussard assumed densities of about 1 hydrogen atom per cubic centimeter for his ramjet, a starship between denser clouds may encounter far less, perhaps 0.01 hydrogen atoms in the same volume.

The other wildcard is the fact that leaving and approaching a stellar system, we encounter the kind of interesting effects shown in the image below. This is anything but a uniform interstellar background. The bubble created by the solar wind is called the heliosphere, at the outer boundary of which is the heliopause (here the solar wind is balanced by inward pressure from the interstellar medium), and as you can see in the diagram, the bow shock forms on the outer edge as the star moves through the ionized gases of the medium. Still within the heliosphere is the region called the termination shock, where the speed of the solar wind is abruptly reduced — between the termination shock and the heliopause is the area known as the heliosheath. 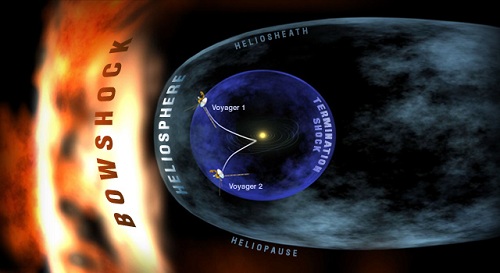 Image: The complicated interactions between the Sun and the local interstellar medium. Credit: NASA/JPL.

Physicist and writer Gregory Benford calls the bow shock, that bumper of plasma and higher density gas that forms 100-200 AU from the star, “the obvious place to decelerate.” Obvious it may be, but I haven’t encountered the idea in the literature before, and it’s an ingenious enough notion that I suspect we’ll be seeing a paper or two on the matter before long. The suddenly higher density and plasma content available here should allow interesting maneuverability along the lines of the Lorentz force turning that Forward and Norem studied for course correction and round-trip missions. The bow shock should also offer prime ground for deceleration.

We have early data on the termination shock from Voyager 2, which crossed it at 84 AU back in 2007, while Voyager 1 entered the heliosheath at 94 AU in 2004, and Benford figures the plasma density increase at the bow shock should be one to two orders of magnitude above the interstellar density, and that means one or two orders of magnitude more deceleration. I want to quote him on this from a recent email:

My main point is that these are 3D structures, so a starship could navigate through them using the Forward I x B torque model which steers without decelerating. Each of the bow shock, heliopause and termination shocks are surfaces one can sail on and in, maximizing the deceleration.

So here is the method for the star sailors of the far future:

I imagine that any trial of a starship in, say 100 years, will begin with expeditions into the several hundred AU shock environment, have a look at distant iceteroids and maybe dwarf stars. Then turn back and try to decelerate using magsail skills on the shock surfaces available. (I surf, and this is like inverse surfing, using natural wave phenomena to slow.) Develop the tech and skills to sail the interstellar seas!

As a starship approaches a star, sensing the shock structures will be like having a good eye for the tides, currents and reefs of a harbor. 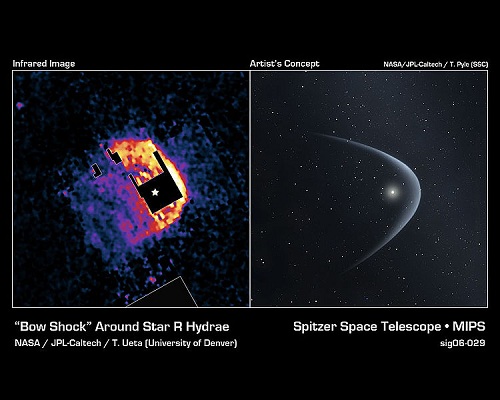 Now we can look at certain astronomical images in a new light, as witness the Spitzer imagery and subsequent artist’s concept above. This is the star R. Hydrae in infrared, showing the bow shock about as well defined as I have ever seen it. Approaching a star using these decelereation methods would involve a long period of braking moving through and along the bow shock, heliopause and termination shock, staying within the high density plasma to take advantage of the increased densities there with the starship’s magsail fully deployed. After the long spiral into the inner system, continued magsail braking or perhaps inner system braking using a solar sail would allow the vehicle to maneuver and explore the new solar system.