Once when reading Boswell’s monumental life of the 18th Century writer and conversationalist Samuel Johnson, I commented to a friend how surprised I had been to discover that Johnson didn’t spend much time reading in his later years. “He didn’t need a lot of time,” replied my friend, a classics professor. “He tore the heart out of books.” That phrase stuck with me over the years and re-surfaced when I started working with Adam Crowl. More than anyone I know, Adam can get to the heart of a scientific paper and explain its pros and cons while someone like myself is still working through the introduction. And because of his fine work with Project Icarus, I thought Adam would be just the person to explain the latest thinking about a classic concept that Friedwardt Winterberg would like to take to the next level. 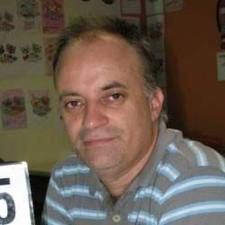 In Jules Verne’s From the Earth to the Moon, the bold Frenchman Michel Ardan, in his first speech to the Baltimore Gun Club, when discussing travelling to the Moon via a cannon-shell, makes the following statement…

Well, the projectile is the vehicle of the future, and the planets themselves are nothing else! Now some of you, gentlemen, may imagine that the velocity we propose to impart to it is extravagant. It is nothing of the kind. All the stars exceed it in rapidity, and the earth herself is at this moment carrying us round the sun at three times as rapid a rate… Is it not evident, then, I ask you, that there will some day appear velocities far greater than these, of which light or electricity will probably be the mechanical agent?

Rockets replaced cannon-shells as the preferred means of interplanetary travel in the early 20th Century, thanks to the work of Tsiolkovksy, Goddard, Oberth and Noordung. They took up Verne’s insight and developed Ardan’s hand-waving further. Applying electricity to rocket motion resulted in the Ion Rocket, and applying light, the Photon Rocket. However the first rocket scientist to propose an engineering solution to how light might be directly harnessed to rocket propulsion, rather than just pushing solar-sails, was Eugen Sänger [1].

Antimatter and the Photon Rocket

Sänger’s discussion of photon rockets showed clearly how difficult it would be – every newton of thrust would require 300 megawatts of photon energy released. Any vehicle generating photons by conventional means would be confined to painfully low accelerations, thus Sänger proposed using matter-antimatter reactions, specifically the mutual annihilation of electrons and positrons, with the resulting gamma-rays (each 0.511 MeV) being reflected by an electron-gas. Unfortunately the electron-gas mirror would need a ridiculously high density, seen only in white-dwarf stars.

The next stage for the matter-antimatter photon rocket saw the work of Robert Forward [2], and more recently Robert Frisbee [3], who applied more modern knowledge of particle physics to the task. Instead of instant and total annihilation of proton-antiproton mixtures, resulting in an explosion of pure high-energy gamma-rays in all directions, the reactions instead produce for a brief time charged fragments of protons, dubbed pions, which can be directed via a magnetic field. According to theoretical analyses by Giovanni Vulpetti [4], in the 1980s, and more recently by Shawn Westmoreland [5], the theoretical top performance of a pion rocket is a specific impulse equivalent to 0.58c. However the pion rocket isn’t strictly a pure photon rocket and suffers from the inefficiency of magnetic nozzles. Simulations by John Callas [6] at JPL, in the late 1980s suggested an effective exhaust velocity of ~1/3 the speed of light could be achieved.

The other difficulty of matter-antimatter propulsion, as graphically illustrated by Frisbee’s work, is the extreme difficulty of storing antimatter. The old concept of storing it as plasma is presently seen as too power intensive and too low in density. Newer understanding of the stability of frozen hydrogen and its paramagnetic properties has led to the concept of magnetically levitating snowballs of anti-hydrogen at the phenomenally low 0.01 K. This should mean a near-zero vapour pressure and minimal loses to annihilation of the frozen antimatter. What it also means is immensely long and thin spacecraft designs. Frisbee’s conceptual designs are literally the size of planets, thousands of kilometres long, but merely metres wide. This minimises the gamma-radiation exposure of heat-sensitive components and maximises the exposure of radiators to the cosmic heat-sink. To achieve 0.5c, using known materials, results in vehicles massing millions of tonnes [3].

Friedwardt Winterberg’s recent preprint [7] suggests a different concept, with the promise of near total annihilation and near perfect collimation of a pure gamma-ray exhaust. Poul Anderson described such a vehicle’s operation in fiction in his Harvest the Fire (1995), describing an advanced matter-antimatter rocket – the exhaust was so efficiently directed that it was invisible for thousands of kilometres before finally appearing as a trail of scattered energy. So what is Winterberg proposing?

We’ve encountered Winterberg’s work before [8] in Centauri Dreams in his designs for deuterium fusion rockets, and his new work is an outgrowth of his work on the magnetic collapse of ions into incredibly dense states. Using the technique he describes, high compression of fusion plasma can be achieved, but in the case of a matter-antimatter ambiplasma (a plasma that is an even mix of the two) the result is even more spectacular.

Essentially what Winterberg describes is generating a very high electron-positron current in the ambiplasma, while leaving the protons-antiprotons with a low energy. This high current generates a magnetic field that constricts rapidly, a so-called pinch discharge, but because it is a matter-antimatter mix it can collapse to a much denser state. Near nuclear densities can be achieved, assuming near-term technical advancements to currents of 170 kA and electron-positron energies of 1 GeV. This causes intensely rapid annihilation that crowds the annihilating particles into one particular reaction pathway, directly into gamma-rays, pushing them to form a gamma-ray laser. By constricting the annihilating particles into this state a very coherent and directional beam of gamma-rays is produced, the back-reaction of which pushes against the annihilation chamber’s magnetic fields, providing thrust. 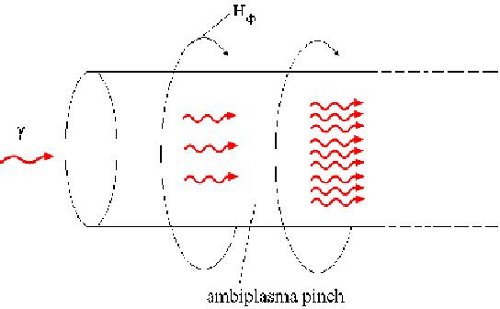 The figure above depicts the processes involved – the magnetic field of the ambiplasma (from the electron-positron current) squeezes a linear atom of protons-antiprotons which begin annihilating, stimulating more annihilation, all in one direction from the annihilation being triggered at one end of the discharge. Thanks to the very confined channel created by the magnetic pinch, the laser beam produced has very limited spread. Intense magnetic-field recoil is created by the firing of the gamma-beam, with a pulsed field-strength of 34 tesla. The recoil force can thus be transferred back to the vehicle by the right choice of conductor surrounding the reaction chamber.

Winterberg ends his paper with an anecdote about Edward Teller, one of the many fathers of the H-bomb, who was of the opinion that photon rockets would eventually be possible – in “500 years” which equates to “impossible” in the minds of the short-sighted. Certainly making antimatter efficiently will be a Herculean task, as the energy requirements are immense. Storing it is equally “impossible”. However, as Winterberg notes, there might be a quicker pathway to confinement.

Over the last decade researchers at the University of Gothenburg, led by Leif Holmlid, have been studying exotic states of deuterium. In the past two years they have reported [9] an ultra-dense state, which has also been independently computed [10] to form inside low-mass brown-dwarf stars. This exotic quantum liquid is one million times denser than liquid deuterium and apparently a superconducting superfluid at room-temperature. Only minute amounts have been made and studied so far, but such a material could be able to sustain intense magnetic fields, up to 100,000 tesla. If it can be manufactured in large amounts, and is stable in intense magnetic fields, then the problem of magnetic confinement of anti-hydrogen at friendlier temperatures becomes more tractable.

Therefore, if nature is kind to us, the goal for a relativistic photon rocket might be closer than the 500 years prophesized by Teller.