How Will Humans Fly to the Stars?

The immense problems of time, distance and life support invariably mean that when we talk about an interstellar mission, we talk about robotics. But the imaginative team at Icarus Interstellar, which is now setting up projects on everything from beamed lightsails (Project Forward) to pulse propulsion engines (Project Helios), has pushed into the biggest what-if of all, the question of manned missions. And as project leader Andreas Hein reminds us in the following article, a variety of approaches have been suggested for this over the years from which a new concept study can grow.

Andreas Hein received his master’s degree in aerospace engineering at the Technische Universität München, and is doing his PhD at the same university in the area of space systems engineering at the Institute of Astronautics. He has participated in several mission studies: a lunar gravity measurement mission by EADS and a cubesat mission analysis. During his internship at ESA-ESTEC, he participated in the joint ESA/industry lunar architecture study of the human spaceflight division, applying different systems engineering methodologies such as stakeholder analysis. Andreas is currently supervising a course on concurrent engineering of space systems at the Institute of Astronautics whose objective is to design an Earth observation mission. His particular interest is in the early phases of systems design, which he lists as requirements engineering, functional analysis, concept design/trade offs. 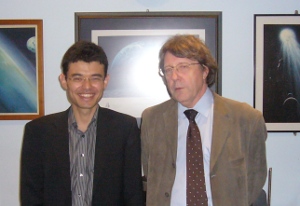 News of recently discovered exoplanets reaches us almost weekly and it seems only a matter of time until an “Earth 2.0” is found out there. If this happens, is there any possibility for humans to travel to this planet with today’s or foreseeable technologies? This is the main question Project Hyperion deals with.

Project Hyperion is a research project whose main purpose is to assess the feasibility of crewed interstellar flight with current or near-future technologies.

I will first give a brief overview of existing concepts for crewed interstellar flight and then dwell on challenges apart from crossing the distance between the stars.

Image: Andreas Hein (left) and Alan Bond, designer of the Bond/Martin World Ship concept, at the headquarters of the British Interplanetary Society. Credit: A. Hein.

Ideas for the Long Haul

The primary purpose of crewed interstellar flight is the long-term colonization of an exosolar system. What are the concepts that exist today to achieve this goal? The most well-known concept was introduced by Robert Forward in 1984 [1], who discusses the feasibility of a crewed trip to the nearest stars by a laser-pushed sail. Another concept is the fusion-propelled “colony ship” by Gregory Matloff, published in 1976 [2] and the “world ship” concept of Alan Bond and Anthony Martin [3]. A recent analysis for an antimatter rocket was conducted by Robert Frisbee in [4]. Most of the existing “near-term” concepts can be put into four categories, based on the mode of crew transportation:

We still know too little about each of these concepts. Nevertheless, some educated guesses can be made: From a) to d) an increasing level of technological sophistication is required in order to achieve the mission. On the other hand, the resources needed for transporting the crew decrease at the same time, which enables faster travel. Think of a lorry being slower than a Ferrari although they have the same horsepower. A world or colony ship is a massive spacecraft, several tens of miles-long. The crew lives and dies over generations on these small worlds, crossing the comic ocean between the stars taking centuries.

Image: A worldship dwarfs the imagination, offering a habitat for humans over the course of generations on a long, slow voyage to the stars. Credit: Adrian Mann.

A suspended animation / hibernation ship is still large but does not require a habitat as large as a world ship: most of time the crew “sleeps” during the trip like in the introductory sequence of the movie “Avatar”. However, some kind of habitat is probably still required for periodical “awakenings”. An embryo or single cell ship will likely have a payload the size of a house as no habitat is required and a digital crew spacecraft payload might have the size of a small car or even smaller.

Each concept is challenging in its own way: It is in principle possible to build a world ship or colony ship today, given the resources. However, how to design a habitat that enables human survival and comfort for centuries? This has analogies to people living on an island cut-off from the rest of the world. How will culture and technology develop under such conditions? Will people live like in the Stone-Age when they arrive at the target star system? How many people should be sent to maintain at least a certain level of cultural and technological diversity? How is the spacecraft maintained over centuries?

The feasibility of using a spacecraft with a crew in suspended animation or hibernation depends on the applicability of these concepts to humans. Whether or not it is possible to sustain a crew in this state for decades or even centuries is still an open question.

An embryo or single cell ship needs an approach to raise and educate them at the target system. Methods like android parenting have been mentioned in the literature. Furthermore, sophisticated automatic manufacturing is required to construct a shelter and to provide nourishment on the target planet. These are all technologies that are not available today. Whether or not a crew can be “resurrected” on the basis of digital data in the target system is an open question. If this becomes possible one day, this technology will not only make this special form of interstellar travel possible but will have a profound impact on our life on Earth.

Besides these technological challenges for each concept, different ethical questions have to be addressed as we are dealing with decisions that have far reaching consequences for the crew sent out to the stars and the ones that are yet unborn.

We have now briefly covered the potential approaches for crossing the gap between the stars. But what happens once the crew arrives at the target star system?

Most of the scientific literature focuses on the trip between the stars. However, the establishment of a colony within the target star system is a neglected, but vital part for planning such a mission [9]. We often assume that a habitable exoplanet is very similar to Earth and human life is possible on its surface. But there are myriads of potential obstacles to colonizing such a planet: An ecosystem that does not provide edible food and water, diseases to which the human immune system can not adopt adequately, toxic substances etc.

It is difficult to say whether it is possible to anticipate these difficulties in advance as many issues will remain undiscovered, even after an exploration with precursor probes. Alternative approaches like terraforming and building artificial colonies in space were also considered [2, 9]. Terraforming aims at changing a planet in a way that human life is possible on its surface for extended periods of time. Artificial colonies might be the last fall-back-option, in case human life is not sustainable on a planetary surface. The concept of large space colonies has been proposed by the physicist Gerard O’Neill in the 70s as a mode of human existence in the future [10]. This might ultimately make colonization of another star system independent of the discovery of a habitable exoplanet. However, the immense difficulties associated with both approaches are difficult to anticipate today. 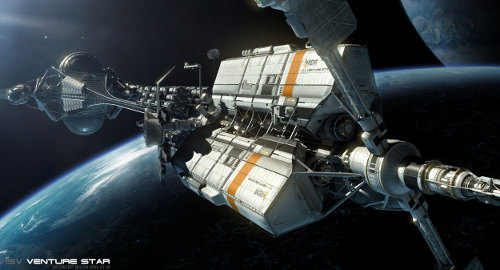 Most of the publications mentioned in this article have limited detail and are restricted to rough outlines and estimates without detailed engineering assessments. Think of the difference between a painter’s pencil sketch to prepare for a painting and the meticulous work that has to be put in to flesh out all the details on the canvas. Currently, only rough sketches exist.

With Project Hyperion we want to get from the sketch to the real painting! It is our conviction that today most of the required feasibility analysis for a crewed interstellar spacecraft can be done with current knowledge. Some readers will certainly think: “Ok, this is a nice exercise but won’t it take several centuries to realize such a mission? So why think about this today?” I agree that it is still a long time to go to see the first humans heading to the stars. However, we humans exist on Earth as a species for about 200,000 years. If one thousand years are one meter, this is a distance of about 200 meters, more than twice the length of a football field. If it takes about 300 years to send out the first humans to the stars, on this scale, this is about 30 cm. How insignificant in comparison to the distance in time we already traveled as a species and what a magnificent chance to take the first steps towards this goal today.