The news that a message has been sent using a beam of neutrinos awakened a flood of memories. Back in the late 1970s I was involved with the Society for Amateur Radio Astronomers, mostly as an interested onlooker rather than as an active equipment builder. Through SARA’s journal I learned about Cosmic Search, a magazine that ran from 1979 through 1982 specializing in SETI and related issues. I acquired the entire set, and went through all 13 issues again and again. I was writing sporadically about SETI then for Glenn Hauser’s Review of International Broadcasting and later, for the SARA journal itself.

Cosmic Search is a wonderful SETI resource despite its age, and the recent neutrino news out of Fermilab took me right back to a piece in its third issue by Jay Pasachoff and Marc Kutner on the question of using neutrinos for interstellar communications. Neutrinos are hard to manipulate because they hardly ever interact with other matter. On the average, neutrinos can penetrate four light years of lead before being stopped, which means that detecting them means snaring a tiny fraction out of a vast number of incoming neutrinos. Pasachoff and Kutner noted that this was how Frederick Reines and Clyde Cowan, Jr. detected antineutrinos in 1956, using a stream of particles emerging from the Savannah River reactor.

The Problem of Detection

In his work at Brookhaven National Laboratory, Raymond Davis, Jr. was using a 400,000 liter tank of perchloroethylene to detect solar neutrinos, and that’s an interesting story in itself. The tank had to be shielded from other particles that could cause reactions, and thus it was buried underground in a gold mine in South Dakota, where Davis was getting a neutrino interaction about once every six days out of the trillions of neutrinos passing through the tank. We’ve had a number of other neutrino detectors since, from the Sudbury Neutrino Observatory in Ontario to the Super Kamiokande experiments near the city of Hida, Japan and MINERvA (Main Injector Experiment for ν-A), the detector used in the Fermilab communications experiment. 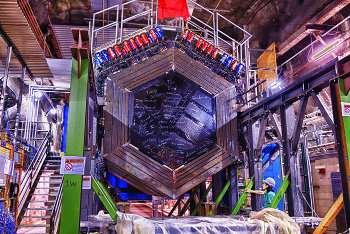 The point is, these are major installations. Sudbury, for example, involves 1000 tonnes of heavy water contained in an acrylic vessel some 6 meters in radius, the detector being surrounded by normal water and some 9600 photomultiplier tubes mounted on the apparatus’ geodesic sphere. Super Kamiokande is 1000 meters underground in a mine, involving a cylindrical stainless steel tank 41 meters tall and almost 40 meters in diameter, containing 50,000 tons of water. You get the idea: Neutrino detectors are serious business requiring many tons of matter, and even with the advantages of these huge installations, our detection methods are still relatively insensitive.

But Pasachoff and Kutner had an eye on neutrino possibilities for SETI detection. The idea has a certain resonance as we consider that even now, our terrestrial civilization is growing darker in many frequency bands as we resort to cable television and other non-broadcast technologies. If we had a lively century in radio and television broadcast terms just behind us, it’s worth considering that 100 years is a vanishingly short window when weighed against the development of a technological civilization. Thus the growing interest in optical SETI and other ways of detecting signs of an advanced civilization, one that may be going about its business but not necessarily building beacons at obvious wavelengths for us to investigate.

Neutrinos might fit the bill as a communications tool of the future. From the Cosmic Search article:

Much discussion of SETI has been taken up with finding a suitable frequency for radio communication. Interesting arguments have been advanced for 21 centimeters, the water hole, and other wavelengths. It is hard to reason satisfactorily on this subject; only the detection of a signal will tell us whether or not we are right. Neutrino detection schemes, on the other hand, are broad band, that is, the apparatus is sensitive to neutrinos of a wide energy range. The fact that neutrinos pass through the earth would also be an advantage, because detectors would be omnidirectional. Thus, the whole sky can be covered by a single detector. It is perhaps reasonable to search for messages from extraterrestrial civilizations by looking for the neutrinos they are transmitting, and then switch to electromagnetic means for further conversations.

Making this possible will be advances in our ability to detect neutrinos, and it’s clear how tricky this will be. The recent neutrino message at Fermilab, created by researchers from North Carolina State University and the University of Rochester, is a case in point. Fermilab’s NuMI beam (Neutrinos at the Main Injector) fired pulses at MINERvA, a 170-ton detector in a cavern some 100 meters underground. The team had encoded the word ‘neutrino’ into binary form, with the presence of a pulse standing for a ‘1’ and the absence of a pulse standing for a ‘0’.

3454 repeats of the 25-pulse message over a span of 142 minutes delivered the information, corresponding to a transmission rate of 0.1 bits per second with an error rate of 1 percent. Out of trillions of neutrinos, an average of just 0.81 neutrinos were detected for each pulse, but that was enough to deliver the message. Thus Fermilab’s NuMI neutrino beam and the MINERvA detector have demonstrated digital communications using neutrinos, pushing the signal through several hundred meters of rock. It’s also clear that neutrino communications are in their infancy.

From the paper on the Fermilab work:

…long-distance communication using neutrinos will favor detectors optimized for identifying interactions in a larger mass of target material than is visible to MINERvA and beams that are more intense and with higher energy neutrinos than NuMI because the beam becomes narrower and the neutrino interaction rate increases with neutrino energy. Of particular interest are the largest detectors, e.g., IceCube, that uses the Antarctic icepack to detect events, along with muon storage rings to produce directed neutrino beams.

Thinking about future applications, I asked Daniel Stancil (NCSU), lead author of the paper on this work, about the possibilities for communications in space. Stancil said that such systems were decades away at the earliest and noted the problem of detector size — you couldn’t pack a neutrino detector into any reasonably sized spacecraft, for example. But get to a larger scale and more things become possible. Stancil added “Communication to another planet or moon may be more feasible, if local material could be used to make the detector, e.g., water or ice on Europa.”

Still pondering the implications of the first beamed neutrino message, I returned to Pasachoff and Kutner, who similarly looked to future improvements to the technology in their 1979 article. What kind of detector would be needed, they had asked, to repeat the results Raymond Davis, Jr. was getting from solar neutrinos at Brookhaven (one interaction every six days) if spread out to interstellar distances? The authors calculated that a 1 trillion electron volt proton beam would demand a detector ten times the mass of the Earth if located at the distance of Tau Ceti (11.88 light years). That’s one vast detector but improvements in proton beam energy can help us reduce detector mass dramatically. I wrote to Dr. Pasachoff yesterday to ask for a comment on the resurgence of his interstellar neutrino thinking. His response:

We are such novices in communication, with even radio communications not much different from 100 years old, as we learned from the Titanic’s difficulties with wireless in 1912. Now that we have taken baby steps with neutrino communication, and checked neutrino oscillations between distant sites on Earth, it is time to think eons into the future when we can imagine that the advantages of narrow-beam neutrinos overwhelm the disadvantages of generating them. As Yogi Berra, Yankee catcher of my youth, is supposed to have said, “Prediction is hard, especially about the future.” Still, neutrino beams may already be established in interstellar conversations. I once examined Raymond Davis’s solar-neutrino records to see if a signal was embedded; though I didn’t find one, who knows when our Earth may pass through some random neutrino message being beamed from one star to another–or from a star to an interstellar spaceship.

Neutrino communications, as Pasachoff and Kutner remarked in their Cosmic Search article, have lagged radio communications by about 100 years, and we can look forward to improvements in neutrino methods considering near-term advantages like communicating with submerged submarines, a tricky task with current technologies. From a SETI perspective, reception of a strong modulated neutrino signal would flag an advanced civilization. The prospect the authors suggest, of an initial neutrino detection followed by a dialogue developed through electromagnetic signals, is one that continues to resonate.

Previous post: How Will Humans Fly to the Stars?