Habitable Zones in Other Galaxies

We often speak of habitable zones around stars, most commonly referring to the zone in which a planet could retain liquid water on its surface. But the last ten years has also seen the growth of a much broader idea, the galactic habitable zone (GHZ). A new paper by Falguni Suthar and Christopher McKay (NASA Ames) digs into galactic habitable zones as they apply to elliptical galaxies, which are generally made up of older stars and marked by little star formation. Ellipticals have little gas and dust as compared to spirals like the Milky Way and are often found to have a large population of globular clusters. Are they also likely to have abundant planets?

The answer is yes, based on the authors’ comparison of metallicity — in nearby stars and stars with known planets — to star clusters in two elliptical galaxies. While many factors have been considered that could affect a galactic habitable zone, Suthar and McKay focus tightly on metallicity, with planet formation dependent upon the presence of elements heavier than hydrogen and helium. Results from Kepler have backed the notion that metallicity and planets go together, although it’s a correlation that has so far been established only for large planets like the gas giants that are the easiest for us to detect. We can’t be sure that the correlation goes all the way down to planets the size of the Earth, but the idea seems logical.

After all, we think Jupiter-class planets formed by the accretion of gases around a rocky core, and the formation of that core may be similar to the formation of Earth-sized planets. The authors think the correlation between stellar metallicity and planets will extend to smaller worlds, while recent exoplanet discoveries help us explore the relationship and extend our thinking to elliptical galaxies. The galaxies in question are M87 and M32, and the investigation is one that invokes the history of star-forming materials. After all, heavy elements are produced inside stars, so the concentration of metals depends critically on the generations of earlier stars.

First generation stars would have low metallicity, whereas stars that form from material that has been through many generations of previous stars would have a high metallicity. Metallicity is important for planet formation because in the hot protoplanetary disc surrounding a star, the formation of protoplanetary bodies (small planetesimals) depends exclusively on high atomic weight elements since the protoplanetary masses are too small to retain hydrogen or helium. Earth-like planets are composed virtually entirely of compounds that are high in atomic number, Z (silicates) or bound to a high Z atom (H2O). Thus, it is reasonable that the metallicity should correlate with planet formation.

Metallicity can be considered in terms of the iron abundance ratio to hydrogen [Fe/H], which the authors use as their indicator, obtaining this value for a variety of nearby stars including many with known planets. Interestingly enough, the metallicity of exoplanet host stars as shown by [Fe/H] peaks at a value well above that of the Sun, leading the authors to comment “…the Sun may be a typical star, but it is not a typical planet-hosting star… It may be that we are lucky to be here.” The metallicity distribution is then extended to gauge habitability in the two ellipticals.

Why these two galaxies? M87 is an active galaxy (it has an active galactic nucleus, or AGN) along with a supermassive black hole, with the AGN thought to be powered up by the black hole, which is itself marked by two relativistic jets and a wide variety of emissions from the accretion disk. M32 is a compact dwarf elliptical, a low-luminosity satellite of M31, the Andromeda galaxy. Here we have a stellar population that is younger and more metal rich at the core than M87’s. The two are markedly different, giving us the chance to make comparisons between active and non-active galaxies. 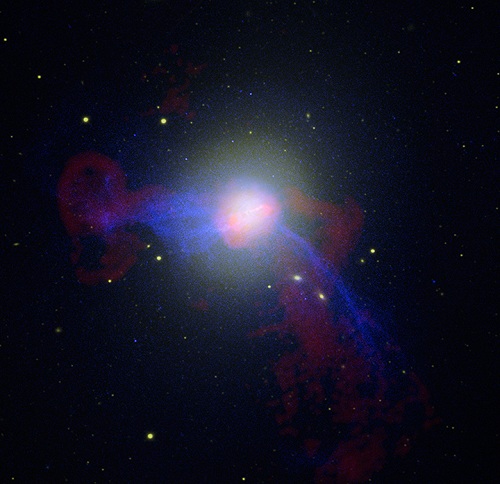 Image: A composite of visible (or optical), radio, and X-ray data of the giant elliptical galaxy, M87. M87 lies at a distance of 60 million light years and is the largest galaxy in the Virgo cluster of galaxies. Bright jets moving at close to the speed of light are seen at all wavelengths coming from the massive black hole at the center of the galaxy. It has also been identified with the strong radio source, Virgo A, and is a powerful source of X-rays as it resides near the center of a hot, X-ray emitting cloud that extends over much of the Virgo cluster. The extended radio emission consists of plumes of fast-moving gas from the jets rising into the X-ray emitting cluster medium. Credit: X-ray: NASA/CXC/CfA/W. Forman et al.; Radio: NRAO/AUI/NSF/W. Cotton; Optical: NASA/ESA/Hubble Heritage Team (STScI/AURA), and R. Gendler.

So what do we get in terms of metallicity distribution in these galaxies? The outer layers of M87 from 10 to 15 Kpc from galactic center show metallicity consistent with planet formation. In fact, this region of M87 is shown to be more favorable for planet formation than the distribution of nearby stars. Note that the habitable region here must form well away from the area of the jet, which would have its star-making materials blown outward and would be bathed in radiation.

The younger M32 galaxy has metallicity conditions somewhat less favorable than nearby stars, but still shows a large fraction of stars with Sun-like metallicity values. The distributions the authors are working with are based not on individual stars but on star clusters, with the assumption that the metallicity values are accurate when thus extended. Overall, the older M87 is likely to be rich in planetary systems but both galaxies should support habitable zones:

We have compared the metallicity distribution of nearby stars that have planets to the metallicity distribution of outer layers of elliptical galaxies, M87 and M32. From this comparison, we conclude that the stars in these elliptical galaxies are likely to have planetary systems and could be expected to have the same percentage of Earth-like habitable planets as those in the neighbourhood of the Sun.

The only other paper I know about that studied galactic habitable zones in other galaxies worked specifically on barred galaxies, and to my knowledge this is the first time the concept has been extended to ellipticals. It would be interesting to see the GHZ studied more closely in terms of radiation, because Suthar and McKay are concerned only with planets that would support microbial life, which might not be extinguished by the same radiation that destroyed more complex life-forms. For them, metals leading to planet formation are the story. In fact, note this comment:

We’re early in the study of galactic habitable zones, but other factors like nearby supernovae, gamma ray bursts (GRBs), encounters with nearby stars and gravitational perturbations all play into the habitability picture when we start going beyond the microbial stage, studies it will be fascinating to see applied to types of galaxy other than our own.

The paper is Suthar and McKay, “The Galactic Habitable Zone in Elliptical Galaxies,” International Journal of Astrobiology, published online 16 February 2012 (abstract). Thanks to Andrew Tribick for the pointer to this one.

Next post: Proxima Centauri: Looking at the Nearest Star