I cannot live without good coffee, and that means fresh beans ground right before brewing, and either manual drip or French press extraction. Every morning after publishing Centauri Dreams I make a couple of cups and go out on the deck to rest my eyes and ponder the state of things before hitting the books for background research in the afternoon. Various thoughts about what to write next always come to me, but yesterday I mused about Enrico Fermi, the legendary Italian physicist who, among so much else, left us with a great unanswered question: Where are they? If it’s so easy for the universe to make intelligent species, why is SETI coming up so short? 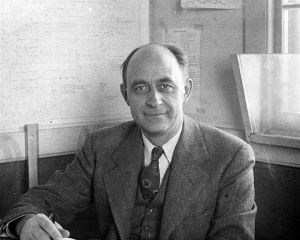 Where are they indeed? The day was gorgeous, the air filled with birdsong, temperatures in the mid-60s and a mild breeze. What better setting to be immersed in, thinking about where life emerges and when? I imagined Fermi sitting across from me with a cup of my Costa Rica Tres Rios in his hand, wondering what he might say about the fuss his question has caused over the years. I can almost hear him saying, “Look, it wasn’t serious. It was just a throw-away comment over lunch. I didn’t even think about it.” And then I imagine him gazing out over the hillside and wrinkling his brow. “But you know, it really is an interesting question, isn’t it? I mean, really!”

Alpha Centauri: The Age of Things

Obviously I’m putting words in the man’s mouth, but that’s the thing about the Fermi paradox: It keeps coming around. And in one respect it seems particularly disturbing. If the Sun is in the vicinity of stars that are far older than it is, that would give planets around those stars far more time to produce their own living species and far more time for intelligence and technology to emerge. We can think about these things in terms of Alpha Centauri, the subject of these last few posts, because based on recent studies, these stars are much older than our Sun.

How old? To answer the question, the go-to people are Patrick Eggenberger (Observatoire de Genève) and colleagues, who in 2004 produced a paper on the matter that ran in Astronomy & Astrophysics (citation below). A wide range of ages has been posited for these stars over the years, ranging from as little as 2.71 billion years up to well over 6 billion — the paper runs through the previous analyses — but Eggenberger and team go to work with the latest astrometric, photometric, spectroscopic and especially asteroseismic data to reach a strong conclusion: “The global parameters of the α Cen system are now ﬁrmly constrained to an age of t = 6.52 ± 0.30 Gyr.”

6.52 billion years, plus or minus 300 million. Now we can think about the Sun’s age, thought to be about 4.57 billion years, and you can see that Alpha Centauri A and B have a 2 billion year jump on us. So does Proxima Centauri, because as we saw yesterday, Greg Laughlin and Jeremy Wertheimer made a convincing case that Proxima is indeed bound to Centauri A and B, and thus probably originated in the same molecular cloud that produced its companions.

I think I’m going to pour Dr. Fermi another cup of coffee about now, because that 2 billion years provides ample time for interesting things to develop given an astrobiologically friendly planet. Long-time Centauri Dreams readers will also know that Charles Lineweaver (Australian National University) has studied the galactic habitable zone and the distribution of stars in the Milky Way by age, finding that 75 percent of the stars in an annular region between 7 and 9 kiloparsecs from galactic center, where life should be possible, are older than the Sun.

Alpha Centauri, using the age estimates of Eggenberger and colleagues, turns out to be fairly average, for Lineweaver says “…the average age of Earths around Sun-like stars is 6.4 ± 0.9 billion years.” He thus thinks that planets around other stars in the galactic habitable zone should be, on average, 1.8 billion years older than our planet, about the same difference as between our Sun and Alpha Centauri. And this is only an average. Milan Ćirković (Astronomical Observatory of Belgrade) notes that there should be inhabited worlds in our galaxy as much as 3 billion years older than our own. So we have on our own doorstep (in astronomical terms) a triple star system that dramatically points to the time frames life has had available to develop civilizations.

At this point Dr. Fermi might well take me to task (at least, the imaginary Dr. Fermi who is not only still with us, but completely up to speed on red dwarf studies). I think he would point out that Proxima Centauri is an active flare star with loads of coronal X-ray emission, not exactly a hospitable place for life. We can imagine a calmer, much older Proxima Centauri eventually settling down into a benign middle age, but imagining that also makes us realize that while Alpha Centauri A and B may have provided the opportunity for intelligent life to develop long ago, Proxima may be the most marginal of the Centauri possibilities as of now.

Red dwarfs live, depending on their mass, for trillions of years, so we shouldn’t despair about the future — and we can always ponder whether any kind of adaptive mechanism might rescue astrobiology even in so hostile a place. But as a home for human colonists of the first interstellar mission, any conceivable planet of Proxima Centauri gives way to what we hope to find around Centauri A or B, a rocky world in a habitable zone we might be able to survive within.

Two Charles Lineweaver papers are in play here, the first being “An Estimate of the Age Distribution of Terrestrial Planets in the Universe: Quantifying Metallicity as a Selection Effect,” Icarus 151 (2001), pp. 307-313 (full-text). The second is “The Galactic Habitable Zone and the Age Distribution of Complex Life in the Milky Way,” Science Vol. 303, No. 5654 (January, 2004), pp. 59-62 (abstract). The Eggenberger paper is “Analysis of alpha Centauri AB including seismic constraints,” Astronomy & Astrophysics Volume 417, Number 1 (April I 2004), pp. 235-246 (abstract).