Advent of the ‘Belters’

On the Trail of the Space Pirates was a 1953 adventure written by Carey Rockwell, a house pseudonym used by a Grosset & Dunlop writer who may or may not have been one Joseph Greene, an editor for the firm in that era. We don’t know for sure who ‘Carey Rockwell’ was and no one has come forward to claim the title, but see the Tom Corbett Space Cadet website for another possible clue to authorship. In any case, On the Trail of the Space Pirates took readers such as my grade school self out into the asteroid belt, where all manner of adventures occur and uranium prospectors ply their trade harassed by evil doers. The asteroids became a lively analogue to the American wild west. 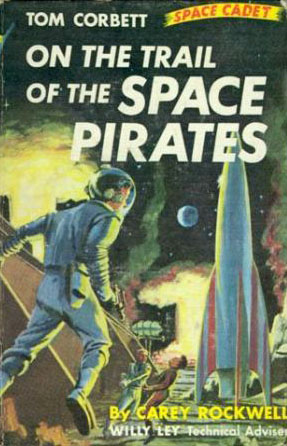 Asteroid mining and the culture it spawns has a robust history in science fiction, but I couldn’t help recalling this particular book when I read about Planetary Resources and its ambitious plan to mine asteroids. The company’s intentions don’t extend all the way to the main belt, but focus on asteroids much closer to home, of which there are plenty, and out of which some 1500 may prove to be of high interest if mining is the intention. What caught me up in the spirit of the science fictional ‘belters’ was this pitch on the Planetary Resources website encouraging people to work for the company. It’s titled ‘We’re looking for a few good asteroid miners’:

1. We are finding a new way to explore space beyond Earth orbit.
2. We are a growing business with incredible people who are dedicated to Planetary Resources’ long-term objectives.
3. Like all small businesses, we are a family. We love our team and what we do.
4. You will get your hands dirty. If you prefer your hands clean, go somewhere else.
5. We have a grill. We are not afraid to use it.
6. Seattle, Washington. Ok, so it rains. It’s gorgeous, and anyone who says otherwise is from California.
7. Bottom line – we build spaceships and explore asteroids. If you need any other motivation to apply, don’t bother.

The brash spirit of those comments is a nice tonic in an era when government space programs seem rudderless and strapped for cash. Whether Planetary Resources can deliver on its promise to study and then mine iron, nickel, gold, platinum and water resources on nearby chunks of rock remains to be seen, though the list of backers — Ross Perot Jr., son of the former presidential candidate, Eric Schmidt and Larry Page of Google, movie mogul James Cameron, X Prize founder Peter Diamandis — offers hope and plenty of cash. And let’s not forget Eric Anderson (Space Adventures) and the well-traveled Charles Simonyi, who is unusual among space tourists in having made not one but two flights to the International Space Station.

This is a genuinely exciting startup that is going to teach us a lot about how fast and how soon we can develop resources in nearby space that can help us go much further afield. In Centauri Dreams terms, I always think about building the needed infrastructure in the Solar System that can one day support an interstellar effort. Extracting water that does not need to be boosted into Earth orbit and creating rocket fuel from space resources to supply future missions fits that bill, as does the hope that enough money can be turned from the extraction of precious metals to make the venture self-sustaining and prosperous. Good fortune to Planetary Resources!

The context in which this new company moves is suggested by a recent report from Caltech’s Keck Institute for Space Studies which was released in early April, and which was invariably mentioned in news reports in tandem with the Space Resources news conference on the 24th. I want to start digging into this report in the next day or two because although it focuses specifically on retrieving an asteroid, it has obvious implications not only in terms of how we might exploit its resources but learn to manipulate its trajectory. All that, of course, takes us into the realm of asteroid threat mitigation. If we one day find an asteroid that is moving on a dangerous trajectory, will we have the time and the know-how to actually do something about it?

Here it’s worth noting that the Apollo missions were able to return 382 kilograms of lunar materials over the course of their six lander missions, while NASA’s OSIRIS-REx mission is slated to retrieve about 60 grams from the asteroid known as 1999 RQ36, which orbits the Sun every 1.2 years and crosses the Earth’s orbit every September. 60 grams isn’t much, but neither is the Apollo sample return when compared to the ~500,000 kilograms of asteroid material the Keck Institute study talks about, an entire asteroid delivered to high lunar orbit by around 2025.

Can it be done? Even more significantly, can it be done without endangering the home planet? I’ll be looking further into the report tomorrow. Meanwhile, have a look at Alan Boyle’s excellent discussion of Planetary Resources’ prospects and the problems they’ll encounter along the way. And check NextBigFuture’s challenging look at a different way to use those small, inexpensive telescopes Planetary Resources intends to put into space as part of the infrastructure for studying asteroid targets. They could conceivably be used as the basis for a ‘hypertelescope,’ an interferometer with a 16,000 kilometer baseline. The possibilities for a close-up look at an exoplanet are intriguing, to say the least, and we’ll discuss them further in coming days.

I’ve believed for a long time that planetary defense demanded we develop the technologies that would get us into the outer Solar System, and we may be seeing the first steps in that process now. The painstaking study of nearby asteroids that the Planetary Resources concept will demand should pay dividends if we ever have to move one not just for resources but for safety.