Bringing an Asteroid to Lunar Orbit

Long before Planetary Resources was a gleam in the eye of its founders, John Lewis (University of Arizona) wrote a book that put asteroid mining into the public consciousness. Mining the Sky: Untold Riches from the Asteroids, Comets and Planets (Perseus Books, 1996) contains no shortage of wonders, as in the well publicized idea that a single one-kilometer asteroid could produce enough gold and silver to equal world production for a century. David Brin writes about this on George Dvorsky’s Sentient Developments site, noting that while that would produce a collapse in gold and silver prices, it would also produce incalculable benefits in terms of raw materials production that could change the economic paradigm entirely.

Lewis is a natural fit with Planetary Resources, the highly buzzed-about startup that plans to make asteroid mining a reality, and it’s no surprise to see that he serves as one of its advisors. But remembering Mining the Sky, I was startled to discover that the idea of using asteroid resources goes all the way back to Konstantin Tsiolkovskii, who wrote about it in The Exploration of Cosmic Space by Means of Reaction Motors in 1903 — it was in this same work that the Russian rocket scientist and visionary first proposed multistage rockets using liquid hydrogen and liquid oxygen for space exploration. It seems fitting that there is an asteroid with a Tsiolkovskii connection, the object 1590 Tsiolkovskaja being named for his wife. 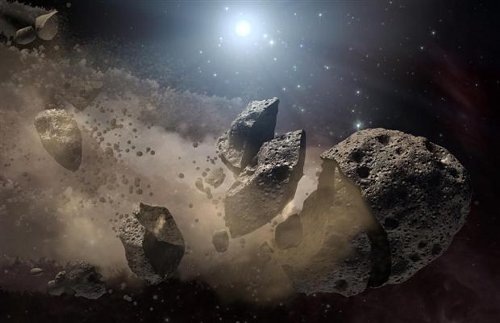 A New Study on Asteroid Retrieval

Caltech’s Keck Institute for Space Studies has examined asteroid possibilities in the just released Asteroid Retrieval Feasibility Study, whose April 12 appearance was timed to perfection by the powers behind Planetary Resources. What the Keck study is interested in is returning an object not to low-Earth orbit but a high lunar orbit, allowing the project to be conducted with far more relaxed propulsion constraints than would be applied deep in Earth’s gravity well. A corollary to this is the fact that larger asteroids can be captured. The study authors settled on an asteroid 7 meters in diameter with a mass on the order of 500,000 kg. This was a 6-month study enlisting a wide range of space-minded talent (see the contributor list on p. 6 of the report).

The Keck report meshes with NASA’s current goals of sending a manned expedition to a near-Earth asteroid halfway into the next decade, though given the mutable nature of NASA’s funding, that’s the least of the reasons to make this happen. Even so, an asteroid retrieval has definite consequences for manned flight. What Keck has in mind is robotic, unmanned missions that culminate in a scout mission, also robotic, to enable detailed mission planning. The full retrieval mission is seen as a precursor to subsequent human missions to this and other NEAs. An NEA in high-lunar orbit then becomes an obvious and accessible target for astronaut visitation.

Again, no astronauts on the retrieval mission, which is robotic. But:

Taken together, these attributes of an ACR [Asteroid Capture and Return] mission would endow NASA (and its partners) with a new demonstrated capability in deep space that hasn’t been seen since Apollo. Once astronaut visits to the captured object begin, NASA would be putting human explorers in contact with an ancient, scientifically intriguing, and economically valuable body beyond the Moon, an achievement that would compare very favorably to any attempts to repeat the Apollo lunar landings.

Reasons for Snatching an Asteroid

Why retrieve an asteroid in the first place? Here’s a distilled rational from the executive summary, one that begins with a focus on the effect of spurring manned spaceflight:

It would provide a high-value target in cislunar space that would require a human presence to take full advantage of this new resource. It would offer an affordable path to providing operational experience with astronauts working around and with a NEA that could feed forward to much longer duration human missions to larger NEAs in deep space. It would provide an affordable path to meeting the nation’s goal of sending astronauts to a near-Earth object by 2025. It represents a new synergy between robotic and human missions in which robotic spacecraft retrieve significant quantities of valuable resources for exploitation by astronaut crews to enable human exploration farther out into the solar system.

All true, of course, but it’s only after this spadework has been done that the report turns to what has electrified the space community about Planetary Resources and its own asteroid plans, and it’s nothing like an Apollo-style effort to get people to particular destinations. The goal is broader and much longer-lasting. Once we have an asteroid, either by traveling to it or by inducing it into a lunar orbit for further exploitation, we have the ability to extract materials from it. All this gets into the real infrastructure-building components of asteroid mining:

…water or other material extracted from a returned, volatile-rich NEA could be used to provide affordable shielding against galactic cosmic rays. The extracted water could also be used for propellant to transport the shielded habitat. These activities could jump-start an entire in situ resource utilization (ISRU) industry. The availability of a multi-hundred-ton asteroid in lunar orbit could also stimulate the expansion of international cooperation in space as agencies work together to determine how to sample and process this raw material. The capture, transportation, examination, and dissection of an entire NEA would provide valuable information for planetary defense activities that may someday have to deflect a much larger near-Earth object. Finally, placing a NEA in lunar orbit would provide a new capability for human exploration not seen since Apollo.

Aspects of the Retrieval Mission

Two aspects of the asteroid retrieval campaign are immediately obvious. Before retrieving anything, we need an extended effort to identify objects that fit the bill physically and offer up orbital parameters that would make them good candidates for the return mission. We also need a transportation method, and here what the Keck study advocates is a ~40-kW solar electric propulsion system with a specific impulse of 3,000 seconds. It’s interesting to see by the report’s figures that, given a single launch to low-Earth orbit aboard an Atlas V-class vehicle, the ultimate plan would be to retrieve 28 times the mass launched to LEO and bring it into high lunar orbit.

The mission plan is fascinating and fodder for science fiction writers. The solar electric propulsion system would be used to spiral the vehicle into high-Earth orbit and a lunar gravity assist would then put the vehicle on a trajectory to the NEA. The report allocates 90 days for studying the NEA and capturing and ‘de-tumbling’ the asteroid, transporting it back to the Earth-Moon system for a second lunar gravity assist that would be used to capture it. Transfer to a stable high lunar orbit would take place about 4.5 months after the first gravity assist.

All of this presupposes mechanisms for stabilizing and moving the asteroid, which the report says could be done with a high-strength bag assembly, deployable and inflatable arms and cinching cables, the bag being 10 meters by 15-meters in diameter looking like this: 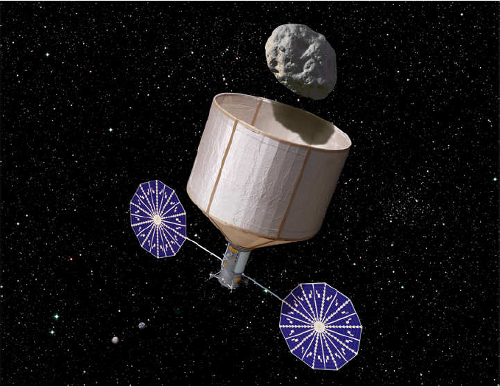 But before any such mission can be flown, we also need improved ways of studying potential targets. Planetary Resources has the idea of launching inexpensive telescopes that could sample a wide variety of NEAs, while the Keck report notes the value of the solar electric propulsion system for sending multiple-target robotic precursors that would precede any human missions. As opposed to the upcoming (2016) OSIRIS REx mission, which will return 60 grams of surface material, a robotic precursor like this would be used to bring back large boulders and regolith samples from any human targets prior to sending manned crews there.

The report’s focus on resource acquisition in space is heartening. Check this:

The asteroidal material delivered to cislunar space could be used to provide radiation shielding for future deep space missions and also validate in-situ resource utilization (ISRU) processes (water extraction, propellant production, etc.) that could significantly reduce the mass and propulsion requirements for a human mission. The introduction of ISRU into human mission designs could be extremely beneficial, but until the processing and storage techniques have been sufficiently tested in a relevant environment it is difficult to baseline the use of ISRU into the human mission architecture. Bringing back large quantities of asteroid materials to an advantageous location would make validation of an ISRU system significantly easier.

Well said — the whole notion of in situ acquisition and utilization is critical as we look toward building a true human future in space. Part of the Planetary Resources plan is to extract water from asteroids not only for human needs (much better than launching from deep within the gravity well) but also for the creation of rocket fuel. The report’s emphasis on the need to bring back asteroid materials to study the prospects in detail is wise, because we need to learn how effectively we can go about extracting these materials and turning them around for space use.

But there are other areas where moving into the asteroids, first with robots and then human crews, makes abundant sense. Tomorrow I want to examine asteroid deflection as one major area that will benefit from these activities, and we’ll also look at the ramifications of all those telescopes Planetary Resources plans to put into space. We may only be scratching the surface of how useful our future ability to move tools and crews to asteroids — or to move asteroids themselves — may turn out to be in building the next phase of human civilization.