Having just re-read Arthur C. Clarke’s The City and the Stars for the first time in a couple of decades, I’ve been preoccupied by the idea of ‘deep time,’ and astronomical events that play out over billions of years. The fictional trick, of course, is to pair human observation with events that take aeons to unfold. In Clarke’s novel, the city of Diaspar is a place that is almost outside of time, a self-contained and beautiful place whose very inwardness ultimately becomes stultifying. But the vision of this glowing jewel of a city surviving amidst the dunes of an ancient Earth is one of those science fiction images that stick with you over a lifetime of reading.

New work out of Vanderbilt University now suggests other deep time images, but they’re likely to be more fantasy than science fiction. Imagine a star moving fast enough to escape the galaxy, living out its life on a long trajectory that will take it into intergalactic space. Kelly Holley-Bockelmann and Lauren Palladino think they can identify more than 675 stars moving out of the Milky Way that have been ejected from the galactic core, red giants with high metallicity — a large proportion of chemical elements other than hydrogen and helium — that are presumably the result of close encounters with the supermassive black hole at the center of the galaxy. 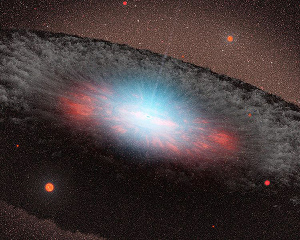 Moving at something like 900 kilometers per second, a hypervelocity star of the kind catalogued by Holley-Bockelmann and Palladino takes roughly 10 million years to travel from the galactic hub to the outer edge of the spiral. Pushing out into the intergalactic dark, it would go through normal stellar evolution that takes it to the red giant stage, having begun as a small star relatively like our Sun. So could planets exist around such a star? If so, any civilization that might emerge on them would play out its lifetime well beyond the vast city of stars that is the Milky Way.

Image: A supermassive black hole at galactic center may be responsible for hypervelocity stars that are leaving the galaxy at high speeds. Credit: NASA/JPL.

That would make for some interesting tales, and science fiction stories like Poul Anderson’s World Without Stars (1966) explore the experience of extraterrestrials living in a system outside the galaxy. But planets would be seriously problematic among hypervelocity stars, given that the scenario under investigation involves a young binary system that wanders too close to the four-million solar mass black hole at the hub. While one star spirals in toward the black hole, the other would be flung outward, presumably disrupting any nascent planetary system around it.

Another mechanism involves a single star making too close a pass when the central black hole is ingesting a smaller black hole. Both situations produce the hypervelocity kick that propels a star out of its galaxy. That’s quite a lot to ask for the stability of any planetary system.

Working with Sloan Digital Sky Survey data, the Vanderbilt work probes these mechanisms, beginning with what has been called a ‘field of streams’ that extends out to about 100 kiloparsecs from the Milky Way. A similar stream extends outward from M31, the Andromeda Galaxy. Given that our two galaxies are not (yet) interacting, the black hole scenarios make a better explanation for these streams of stars than interactions between galaxies. To become intergalactic wanderers, stars must exceed the Milky Way’s escape velocity, now pegged at somewhere between 500 and 600 kilometers per second. So we have a mixture of bound stars on highly eccentric orbits and hypervelocity stars that are escaping from the galaxy altogether.

Stars on their way out of the Milky Way should show a definite signature. From the paper:

It is useful to compare this to theoretical predictions of stellar ejections from the Milky Way (Kollmeier et al. 2009). Stars ejected from the galaxy center through three-body interactions with a SMBH [supermassive black hole] will typically have much higher metallicity than stars that were stripped from satellite galaxies originating in the outskirts of a galaxy halo…

Or as Holley-Bockelmann puts it in this Vanderbilt news release:

“These stars really stand out. They are red giant stars with high metallicity which gives them an unusual color.”

Usefully, stars between galaxies may offer up insights into the history and evolution of galaxy clusters, but followup observations are needed to weed out any candidates that are actually much closer brown dwarfs rather than hypervelocity red giants. As to my musings about planetary systems around hypervelocity stars, they’re likely to be little more than that, because how a planetary system could stay gravitationally bound to a star that has had a violent encounter with a black hole remains a mystery — most likely any previously existing planets would be torn away to become lone wanderers themselves. But if anyone has seen any work on planetary survival in these scenarios, please let me know. It seems a wild stretch.

The paper is Palladino et al., “Identifying High Metallicity M Giants at Intragroup Distances with SDSS,” accepted for publication in The Astronomical Journal Vol. 143, No. 6 (May, 2012), p. 128 (abstract / preprint). Another science fictional treatment of stars outside galaxies is Iain Banks’ Against a Dark Background (1993), which is finally nearing the top of my reading stack.