Can we tell something about the planets around another star by examining that star’s atmosphere? A new study out of the University of Warwick makes a strong case for the method in the study of white dwarfs, following up on a landmark 2007 paper by Benjamin Zuckerman (UCLA) that looked at pollution in white dwarf photospheres. ‘Pollution’ as in metals that shouldn’t be there, which suggests an accretion disk of material feeding the star, which itself would have collapsed from a red giant stage and is perhaps now absorbing planetary material around it.

What we would expect to find in the atmosphere of a white dwarf is little more than hydrogen and helium — heavy elements should quickly sink to the core and not be observable. But white dwarfs with metal-contamination in their atmospheres have been observed for almost a century now. Let me Boris Gänsicke and colleagues on this, from the paper on the University of Warwick work (internal references deleted for brevity):

…the rapidly growing number of white dwarfs that are accreting from circumstellar discs… unambiguously demonstrates that debris from the tidal disruption of main-belt analogue asteroids or minor planets… or Kuiper-belt like objects…, likely perturbed by unseen planets…, is the most likely origin of photospheric metals in many, if not most polluted white dwarfs.

In a study of more than 80 white dwarfs using the Cosmic Origin Spectrograph on the Hubble Space Telescope, the researchers found four that showed not only oxygen, magnesium, iron and silicon, but a small amount of carbon in their photospheres, closely matching the composition of rocky planets, including the Earth, that orbit close to our Sun. The evidence is that all four stars once had at least one rocky planet orbiting them which has now been destroyed. And because heavy elements like these would be pulled into the core in short order, the researchers believe they are observing the final phase of the destruction of these worlds, an inflow of material falling into the stars at a rate of up to 1 million kilograms every second. 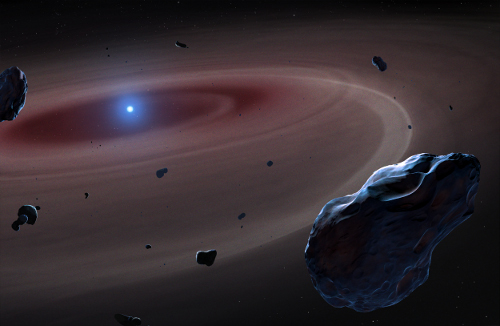 Image: A white dwarf sits in the centre of the remnant of a planetary system. Asteroid sized debris is scattered inwards by interaction with the remaining planets and is tidally disrupted as it approaches the white dwarf forming a disc of dust some of which is raining down onto the star. The researchers have found that the composition of the debris that has just fallen onto the four white dwarfs matches the composition of Earth-like rocky worlds. Credit: Mark A. Garlick.

The white dwarf PG0843+516 turns out to be particularly interesting because of the amount of iron, nickel and sulphur in its atmosphere — the study refers to it as ‘extremely polluted’ — strongly suggesting the star is swallowing the core of a rocky planet that had undergone the same kind of differentiation that occurred in the Earth. Gänsicke sees this as a glimpse of the processes that will one day play out long after our Sun has left its red giant phase:

“What we are seeing today in these white dwarfs several hundred light years away could well be a snapshot of the very distant future of the Earth. As stars like our Sun reach the end of their life, they expand to become red giants when the nuclear fuel in their cores is depleted. When this happens in our own solar system, billions of years from now, the Sun will engulf the inner planets Mercury and Venus. It’s unclear whether the Earth will also be swallowed up by the Sun in its red giant phase – but even if it survives, its surface will be roasted.”

Not a pretty picture, but the rest of the Solar System will be likewise disrupted:

“During the transformation of the Sun into a white dwarf, it will lose a large amount of mass, and all the planets will move further out. This may destabilise the orbits and lead to collisions between planetary bodies as happened in the unstable early days of our solar system. This may even shatter entire terrestrial planets, forming large amounts of asteroids, some of which will have chemical compositions similar to those of the planetary core. In our solar system, Jupiter will survive the late evolution of the Sun unscathed, and scatter asteroids, new or old, towards the white dwarf. It is entirely feasible that in PG0843+516 we see the accretion of such fragments made from the core material of what was once a terrestrial exoplanet.”

All of the more than 80 white dwarfs in the study are within several hundred light years of Earth, offering us a glimpse into deep time, a reminder that our own system formed long after many nearby stars were fully mature and doubtless orbited by planets of their own. The paper is Gänsicke et al., “The chemical diversity of exo-terrestrial planetary debris around white dwarfs,” accepted for publication in the Monthly Notices of the Royal Astronomical Society (preprint). The Zuckerman paper cited above is “Externally Polluted White Dwarfs with Dust Disks,” Astrophysical Journal 663 (2007), p. 1285 (preprint). A University of Warwick news release is also available.