Antimatter is so tantalizing a prospect for propulsion that every time a new slant on using it appears, I try to figure out its implications for long-haul missions. But the news, however interesting, is inevitably balanced by the reality of production problems. There’s no question that antimatter is potent stuff, with the potential for dealing out a thousand times the energy of a nuclear fission reaction. Use hydrogen as a working fluid heated up by antimatter and 10 milligrams of antimatter can give you the kick of 120 tonnes of conventional rocket fuel. If we could get the cost down to $10 million per milligram, antimatter propulsion would be less expensive than nuclear fission methods, depending on the efficiency of the design.

But how to reduce the cost? Current estimates show that producing antimatter in today’s accelerator laboratories runs the total up to $100 trillion per gram. But when I was researching my Centauri Dreams book, I spent some time going through the collection of Robert Forward’s papers at the University of Alabama-Huntsville, where several boxes of materials are stored in Salmon Library. Forward was constantly working in a number of different fields, always keeping his eye on the latest research, and as part of that effort he produced a series of newsletters on antimatter developments that he circulated among colleagues. 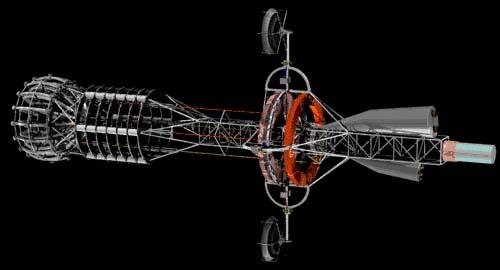 Image: A Penn State artist’s concept of an antimatter-powered Mars ship with equipment and crew landers at the right, and the engine, with magnetic nozzles, at left. Credit: PSU.

Reading through these materials, I came to see that when we quote the $100 trillion per gram figure, we’re talking about antimatter as produced more or less as a byproduct. Forward understood and appreciated the science requirements of particle accelerator labs but also saw that they were hardly the most efficient place to produce antimatter in any quantity. They were not, after all, in the propulsion business. He proceeded to do a study for the US Air Force looking at what might happen if an antimatter facility were actually designed for no other purpose than the creation of antiprotons, finding that the energy efficiency could be raised from one part in 60 million to a part in 10,000, or 0.01 percent.

The cost of building the factory, meanwhile, could be lowered dramatically, to the point where Forward believed our $10 million per milligram would be within reach. This is an interesting figure in several ways. As noted above, it makes antimatter feasible for certain kinds of space missions (assuming equivalent advances in our methods of antimatter storage. But as the price begins to drop, we can expect to find new applications in other areas of research, which should drive demand and spur further work on efficient production. It’s worth remembering that even at today’s prices, antimatter has proven its worth in scientific research and medical uses.

What about other ways of lowering the cost? One possibility is to look beyond slamming high-energy protons into heavy-nuclei targets. Writing with Joel Davis in a book called Mirror Matter: Pioneering Antimatter Physics (Wiley, 1988), Forward looked at options like heavy ion beam colliders, in which beams of heavy ions like uranium could be collided to produce 1018 antiprotons per second (with acknowledged problems in creating large amounts of nuclear debris). He also considered new generations of superconducting magnets to create magnetic focusing fields near the region where the beams collide, which should make tighter beams and greater antimatter production possible.

I bring all this up because the possibility of harvesting antimatter from natural sources in space, which we talked about last week, has to be weighed against boosting production here on Earth. But Forward’s ideas actually coupled the two notions. He wanted to move antimatter production by humans into space in the form of huge factories. Here’s what he has to say on this in an essay in his book Indistinguishable from Magic (Baen, 1995):

Where will we get the energy to run these magic matter factories? Some of the prototype factories will be built on Earth, but for large scale production we certainly don’t want to power these machines by burning fossil fuels on Earth. There is plenty of energy in space. At the distance of the Earth from the Sun, the Sun delivers over a kilowatt of energy for each square meter of collector, or a gigawatt (1,000,000,000 watts) per square kilometer. A collector array of one hundred kilometers on a side would provide a power input of ten terawatts (10,000,000,000,000), enough to run a number of antimatter factories at full power, producing a gram of antimatter a day.

We’re a long, long way from producing a gram of antimatter a day, of course, which is why studies like the recent one performed by Ronan Keane (Western Reserve Academy) and Wei-Ming Zhang (Kent State University) have such a futuristic air. But it’s important to learn the theoretical constraints on propulsion systems even if the required antimatter isn’t available, and on that score, Keane and Zhang are thinking ahead to the most advanced kind of antimatter of them all, a beamed core drive. To make it work, assuming you have the antimatter available, you need to inject protons and antiprotons into a magnetic nozzle, one that channels charged pions from the matter/antimatter annihilation into a focused beam of powerful thrust.

Although charged pions decay quickly, they can start out at 90 percent of the speed of light. Unfortunately, earlier magnetic nozzle calculations have proven inefficient at channeling these energies, dropping the exhaust velocity down to a third of this value. Tomorrow we’ll look at how a more efficient magnetic nozzle can produce better results, as Keane and Zhang have analyzed using CERN software to simulate what would go on in the hellish interior of a beamed core antimatter engine. But we also need to consider other ways of using antimatter for propulsion, assuming that Forward’s space-borne factories aren’t going to be coming online any time soon.