Toward a Beamed Core Drive

If you didn’t see this morning’s spectacular launch of the SpaceX Falcon 9, be sure to check out the video (and it would be a good day to follow @elonmusk on Twitter, too). As we open the era of private launches to resupply the International Space Station, it’s humbling to contrast how exhilarating this morning feels with the great distances we have to traverse before missions to another star become a serious possibility. We’ve been talking the last few days about the promise of antimatter, but while the potential for liberating massive amounts of energy is undeniable, the problems of achieving antimatter propulsion are huge.

So we have to make a lot of leaps when speculating about what might happen. But let’s assume just for the sake of argument that the problem analyzed yesterday — how to produce antimatter in quantity — is solved. What kind of antimatter engine would we build? If everything else were optimum, we’d surely try to master a beamed core drive, the pure product of the matter/antimatter annihilation sequence. Protons and antiprotons are injected into a magnetic nozzle, blowing out the back at a substantial percentage of the speed of light. This is the kind of rocket analyzed by Ronan Keane (Western Reserve Academy) and Wei-Ming Zhang (Kent State University) in the paper I’ve been skirting around the edges of these past few days.

The paper, headed for publication in the Journal of the British Interplanetary Society, has the provocative title “Beamed Core Antimatter Propulsion: Engine Design and Optimization,” and it deals with the particle stream emerging from proton/antiproton collisions. What you get when you put the two together are gamma rays and pions, some of the latter charged and some neutral. Almost immediately the pions decay into positrons and electrons, which meet each other and produce gamma rays. But the tens of nanoseconds the pions take to decay gives us long enough to channel the charged pions through a magnetic nozzle to produce the needed thrust. 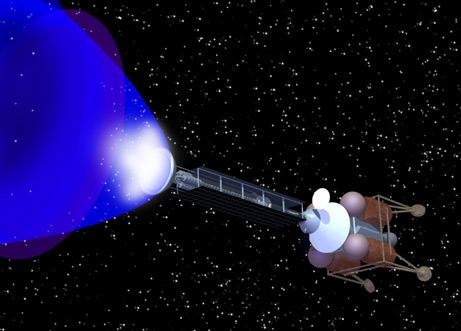 Image: Antimatter promises fast transportation throughout the Solar System and the opportunity for interstellar probes, but only if we can master its production and storage. New work is explaining how efficient an antimatter engine might be. Credit: Positronics Research, LLC.

The beamed core engine, then, is all about channeling the pions into a focused flow. Get this right and you’ve got a lot of energy to work with. In fact, Keane and Zhang note that the energy released per kilogram of annihilating antimatter and matter is 9 X 1016 joules, which is two billion times more than the thermal energy from burning a kilogram of hydrocarbon, and over a thousand times larger than burning a kilogram of fuel in a nuclear fission reactor. But while the beamed core engine is attractive because of the high relativistic velocities of the charged particles produced by the annihilation reactions, the situation is not ideal.

For one thing, much of the energy of the reaction goes into producing electrically neutral particles, which are impervious to the workings of a magnetic nozzle and thus cannot contribute to thrust. The other problem is that the nozzles we’ve been able to analyze have efficiency problems of their own in terms of creating the tight beam of thrust we’d like to produce. What Keane and Zhang do is to use software called Geant4 from the CERN accelerator laboratory to produce simulations of the interactions of particles with matter and fields. They want to bring previous studies of beamed core concepts up to date especially in terms of magnetic nozzles.

Robert Frisbee has performed rigorous studies of beamed core concepts in which magnetic nozzle efficiency is only about 36 percent, which means that while you’re dealing with pions that are initially moving at 90 percent of light speed and above, the exhaust velocity of the rocket would be just a third of that amount. Keane and Zhang derive an efficiency that is better than twice that, and manage to reach charged pion exhaust speeds of 69 percent of c. They also show that the initial speed of charged pions in a beamed core engine is actually closer to .81c than Frisbee’s 90 percent-plus. Despite the lower initial speed, the nozzle efficiencies make quite a difference depending on the kind of mission being attempted:

Frisbee’s papers explain in depth the needed generalization to account for emission of uncharged particles… When loss of propellant is taken into account, Frisbee has shown that ve ~ 0.3c leads to a beamed core rocket facing daunting challenges in reaching a true relativistic cruise speed on a one-way interstellar mission where deceleration at the destination (a “rendezvous” mission) would be involved.

… with a payload of 100 metric tons, a 4-stage beamed core rocket designed for a cruise speed of 0.42c on a 40 light-year rendezvous mission would require 40 million tons of antimatter fuel. If the cruise speed were limited to 0.25c or less, only two stages might be needed, and Frisbee envisaged viable interstellar missions with as few as one beamed core stage; in such scenarios, fuel requirements would be dramatically lower.

All of this at 36 percent nozzle efficiency. The new numbers change the picture, with Keane and Zhang stating “With the new reference point of ve =0.69c provided by the present Geant-based simulation, true relativistic speeds once more become a possibility using the highest performance beamed core propulsion in the distant future.”

Note the ‘distant future’ caveat, highly significant when you consider our problems in producing antimatter (or harvesting same) and the perhaps even more intractable issues involved in storage.

On Software and Methodology

But even if we can’t put a timeframe on something as futuristic as a beamed core rocket, we can continue to study the concept, and it’s heartening to see Keane and Zhang’s conclusion that the simulation software at CERN has proven robust in meeting this challenge and updating our numbers. Whether or not Keane and Zhang’s methodology is on target may be another issue, as Adam Crowl noted recently in a post to a private mailing list of aerospace engineers. Crowl hastens to add that his computations are provisional, but let me quote (with his permission) where he is right now on the magnetic nozzle efficiency issue:

There’s a problem with using just the exhaust velocity given to *part* of the fuel/propellant. It means the actual mass-ratio for a given delta-vee is quite different to a naive computation using the classic Tsiolkovskii equation. A more useful figure of merit for rockets with mass-loss in addition to reaction mass is specific impulse – momentum change per unit mass of fuel/propellant. Using the equations derived by Shawn Westmoreland and the rather vague particle energies in Zhang & Keane, the effective specific impulse is ~0.28c. Even with a perfect jet efficiency the Isp is just 0.31c.

The antimatter reaction, then, may not offer as much as we hoped:

The 0.81c average particle speed quoted in the paper isn’t as useful as the spread of kinetic energies in the particles produced, or the total kinetic energy in the distribution, but they don’t report either figure. What it does imply is that an antimatter-matter reaction puts about 11% of the mass-energy into the charged particles. Not exactly spectacular.

The chance to go to work on concepts through papers in the preprint process is invaluable, and we’ll see how Crowl’s thinking, as well as Keane and Zhang’s, evolves with further study of the issues in this paper. One thing is for sure: Given the manifest problems of antimatter production and storage, we’ll have no shortage of time in which to consider these matters before the question of actually producing this kind of antimatter rocket becomes pressing.