Long-time Centauri Dreams readers know I love the idea of ‘deep time,’ an interest that cosmology provokes on a regular basis these days. Avi Loeb’s new work at Harvard tweaks these chords nicely as the theorist examines what we know and when we won’t be able to study it any longer. For an accelerating universe means that galaxies are moving outside our light horizon, to become forever unknown to us. Using tools like the Wilkinson Microwave Anisotropy Probe, we’ve been able to learn how density perturbations in the early universe, thought to have been caused by quantum fluctuations writ large by a period of cosmic inflation, emerged as the structures we see today. But are there limits to cosmological surveys?

Start with that period of inflation after the Big Bang, which would have boosted the scale of things by more than 26 orders of magnitude, helping to account for the fact that the cosmic microwave background (CMB) appears so uniform in all directions. We can tease out the irregularities that have grown into galaxies today. Loeb refers to these density perturbations as a ‘Rosetta stone’ that has unlocked our understanding of the largest cosmological parameters.

Even so, he concludes in his new paper that our ability to understand the earliest period of the universe deteriorates over time. In fact, the optimum time to study the cosmos turns out to have been more than 13 billion years ago, with information being lost along the way in the eras since. From the paper:

… the most accurate statistical constraints on the primordial density perturbations are accessible at z ∼ 10, when the age of the Universe was a few percent of its current value (i.e., hundreds of Myr after the Big Bang). The best tool for tracing the matter distribution at this epoch involves intensity mapping of the 21-cm line of atomic hydrogen… Although the present time (a = 1) is still adequate for retrieving cosmological information with sub-percent precision, the prospects for precision cosmology will deteriorate considerably within a few Hubble times into the future.

The era Loeb picks as optimum for observation is just 500 million years after the Big Bang, when cosmic perturbations were still emerging in the form of the first stars and galaxies. Hubble time, as defined by the standard cosmological model, is 13.8 billion years, giving us a sense of the scale he is working with. Today we can use 21-centimeter surveys to map the early distribution of matter, but such observations will be impossible in the far future. We have to reckon with the fact that dark energy is still an open question — does it evolve with time? Loeb’s work assumes a universe with a true cosmological constant, but he notes that the ultimate loss of information will occur whether or not an accelerated expansion varies as the universe ages. 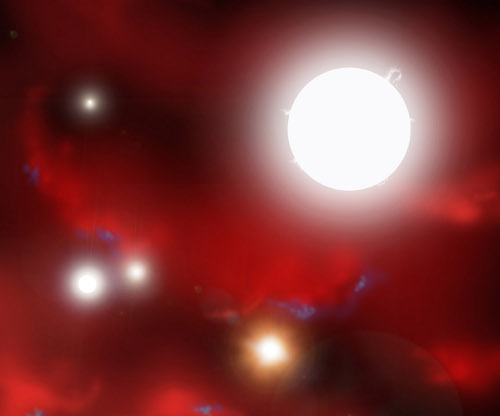 Image: New research finds that the ideal time to study the cosmos was more than 13 billion years ago, just about 500 million years after the Big Bang – the era (shown in this artist’s conception) when the first stars and galaxies began to form. Since information about the early universe is lost when the first galaxies are made, the best time to view cosmic perturbations is right when stars began to form. Modern observers can still access this nascent era from a distance by using surveys designed to detect 21-cm radio emission from hydrogen gas at those early times. Credit: Harvard-Smithsonian Center for Astrophysics.

This work takes us into deep time indeed, with Loeb’s calculations showing that beyond 100 Hubble times (a trillion years in the future), the wavelength of the CMB and other extragalactic photons will be stretched by a factor of 1029 or more, making current cosmological sources unobservable:

While the amount of information available now from observations of our cosmological past at z ∼ 10 is limited by systematic uncertainties that could potentially be circumvented through technological advances, the loss of information in our future is unavoidable as long as cosmic acceleration will persist.

It’s always interesting to speculate about what any observers in this remote future would make of the universe without the ability to recover evidence of the early cosmological perturbations. Clearly our observations have a fundamental limit as a function of cosmic time, and even our existing data, which Loeb sees as far from optimal, will one day be unrecoverable from new observations. If there are future advances that would somehow surmount these limitations to open up the universe’s past, we can only speculate on what they might be, and how they would be developed by a civilization living in this unimaginably remote future cosmos.

The paper is Loeb, “The Optimal Cosmic Epoch for Precision Cosmology,” accepted for publication in the Journal of Cosmology and AstroParticle Physics (preprint).