Impacts Spreading Life through the Cosmos?

Still catching up after the recent series on antimatter propulsion, I want to move into some intriguing work on panspermia, the idea that life may spread throughout a Solar System, and perhaps from star to star, because of massive impacts on a planetary surface. Catching up with older stories means leaving some things unsaid about antimatter — in particular, I want to return to the question of antimatter storage, which in my mind is far more significant a problem even than antimatter production. But there’s time for that next week, and as I said yesterday, interesting stories keep accumulating and deserve our attention.

What Tetsuya Hara (Kyoto Sangyo University) and colleagues put forth in a recent paper are their calculations about the ejection of life-bearing rocks and water into space from events like the possible ‘dinosaur killer’ asteroid impact some 65 million years ago, which involved an asteroid 10 kilometers in diameter. It’s a remarkable fact that materials can be knocked off one planetary surface and wind up on another, and in some quantity. Consider, for example, the 100 or so meteorites identified by their isotopic composition as being from Mars. They show marked similarity in chemical composition to Viking’s analysis of Martian surface rocks in 1976, and trapped gases in some closely resemble the Martian atmosphere. 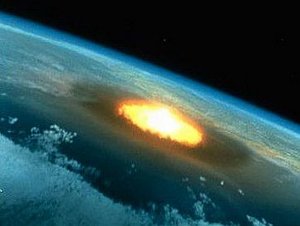 So planets in the same system can exchange materials, and of course the Allan Hills meteorite found in Antarctica (ALH 84001), thought to have been ejected from Mars about 16 million years ago, caused quite a stir back in 1996 when scientists thought they had found evidence for microscopic fossils within it, an analysis that remains controversial. But whether or not ALH 84001 contained life, the discovery of various kinds of extremophiles here on Earth and the possibility that they could survive for long periods trapped in rocky debris leads to the idea that one world can seed another, and as we’ve seen in earlier posts on the topic, the idea goes back as far as the Greek philosopher Anaxagoras, with a revival of interest in the 19th Century.

Image: Would an asteroid impact like this drive life-bearing materials to other planets? Possibly so, but the bigger question is, would microorganisms be able to survive the trip? Credit: NASA.

Fred Hoyle and Chandra Wickramasinghe, who were proponents of continuing panspermia and the idea that life entering Earth’s atmosphere from outside could be a driver for evolution, would doubtless find Hara and team’s work fascinating. While the latter argue that solar storms could eject microbes from the upper atmosphere into space, they concede that bolide impacts would be the major driver:

Naturally, those meteors, asteroids or comets which strike with the strong force, would eject the most material into space. Thus it could be predicted that the asteroid or meteor which struck this planet 65 million years ago, and which created the Chicxulub crater (Alvarez. et al. 1979) would have ejected substantial amount of rock, soil, and water into space, some of which would have fallen onto other planets and moons, including stellar bodies outside our stellar system, Kuiper belt objects, Oort cloud objects, and possibly extrasolar planets…

And there’s the issue — just how much material would actually be transferred not just into the outer Solar System, but to nearby stars? Hara uses the Chicxulub crater event as the model for the kind of collisions that drive Earth materials into space, estimating that about the same amount of mass would be ejected from Earth as arrived in the original asteroid impactor.

Long Journey into the Dark

Remarkably, almost as much of the ejected materials make the journey to Europa as to our own Moon, an interesting outcome explained by Jupiter’s deep gravitational well, which in this case takes possibly biologically-laden material to a moon that contains an under-ice ocean. Another place of high astrobiological interest is Saturn’s moon Enceladus, with an internal body of water of its own, as evidenced by the geysers Cassini continues to monitor around its south pole. Here the numbers drop considerably but as many as 500-2000 Earth rocks may have reached Enceladus. Even distant Eris in the Kuiper Belt scarfs up 4 x 107 Earthly objects in one scenario.

These numbers vary according to which of two models the authors use, but in either case their figures show significant movement of Earth materials into the outer Solar System. Extending the model to Gliese 581 becomes a fascinating exercise because we have reason to believe that the ‘super-Earth’ Gl 581d may orbit in the outer edges of the habitable zone there. The result: As many as 1000 rocks may have made the million year journey to fall upon a planet in the Gl 581 system. Thus we have the possibility, however remote, of dormant microorganisms moving between one stellar system and another, to fall upon a planet that conceivably can support life.

Hara and team acknowledge the uncertainties in their calculations but insist that “…the probability of rocks originated from Earth to reach nearby star system is not so small.” If this is the case, their conclusion points to the possibility that life did not originate on Earth at all:

We estimate the transfer velocity of the microorganisms among the stellar systems. Under some assumptions, it could be estimated that if origin of life has begun 1010 years ago in one stellar system as estimated by Joseph and Schild (2010a, b), it could propagate throughout our Galaxy by 1010 years, and could certainly have reached Earth by 4.6 billion years ago (Joseph 2009), thereby explaining the origin of life on Earth.

This assumes that there are 25 sites where life began 1010 years ago, with biological materials spread through the galaxy by the same kind of impact events that caused the Chicxulub crater. Add to this recent work by Brandon Johnson (Purdue) and colleagues. They’ve been investigating layers of rock droplets called spherules, which may tell us better than craters about ancient impacts, including the size and velocity of the impacting object. An initial reading of their work shows that the Late Heavy Bombardment, thought to have occurred from 4.1 billion to 3.8 billion years ago as huge numbers of asteroids and comets hit the Earth, may have lasted longer than we have previously believed.

Was Chicxulub relatively minor compared to the size of some of these impacts? Evidently so, which would account for even more materials from our planet being pushed out into nearby space. The wild card in all this is the ability of microorganisms to survive not just the impact but the journey, and when it comes to interstellar panspermia, my own credulity is pushed to the breaking point. Although I’m running out of time this morning, I want to return to two papers in Nature that examine the Late Heavy Bombardment and the history of later impacts on our planet. We’ll home in on evidence for a longer bombardment era when Centauri Dreams returns next week.

The Hara paper is “Transfer of Life-Bearing Meteorites from Earth to Other Planets,” Journal of Cosmology 7 (2010), p. 1731 (preprint). Thanks to John Kilis for the original pointer to Hara and an update on the Nature work.