Thoughts on the Square Kilometer Array

We now know that the vast collection of radio dishes and antennae that will become the Square Kilometer Array (SKA) will be built on two sites, with the majority of dishes in Phase 1 (beginning in 2016) being constructed in South Africa, and further dishes added in Australia as the project develops. The SKA is to be a radio telescope of unprecedented sensitivity capable of sky surveys at frequencies from 70 MHz to 10 GHz. A SKA news release notes that “All the dishes and the mid-frequency aperture arrays for Phase II of the SKA will be built in Southern Africa while the low-frequency aperture array antennas for Phase I and II will be built in Australia.” 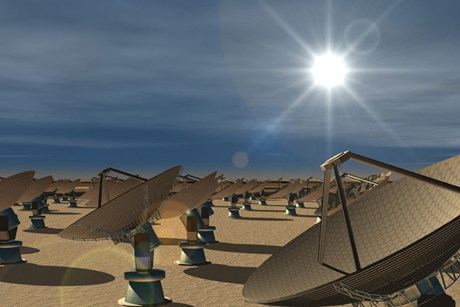 Astronomy Now’s Keith Cooper looks at the recent announcement in South Africa and Australia Share SKA Spoils, noting that both the MeerKAT (Karoo Radio Telescope, in South Africa) and ASKAP (Australian SKA Pathfinder) precursor telescopes have already been built, prompting the advisory committee to choose inclusivity as the best option. The idea is to maximize existing investments in both countries, but I’m still surprised by the result. From Cooper’s article:

What makes their decision slightly controversial is that the organisation’s own Site Advisory Committee had ruled that while both bids were excellent, South Africa had the edge overall after considering criteria such as levels of radio interference and long term sustainability of a radio quiet zone, the physical characteristics of the site, long distance data network connectivity, operating and infrastructure costs as well as the political and working environment.

And from an article in South Africa’s Times Live:

The eagerly awaited decision now means that engineers can connect antennas at Australia’s core site at Mileura station, about 100 kilometres (60 miles) west of Meekathara in western Australia. Other antennae are distributed across Australia and New Zealand.

South Africa’s site in the arid Karoo region will now also be connected by a remote link to a network of dishes stretching across southern and eastern Africa and as far away as Ghana.

What the SKA Can Do

The SKA is one of the primary global science projects of the early 21st Century, with a charter to study the earliest eras of the universe, between the epoch of recombination, when charged electrons and protons first became bound (from which came the Cosmic Microwave Background we can study today) and the emergence of the first galaxies. But its proposed areas of investigation range widely, from the large-scale structure of the universe as affected by dark energy to the workings of pulsars and black holes. For our purposes on Centauri Dreams, it’s useful to focus on the role the SKA has to play in exoplanet studies, while its potential in the area of SETI is impossible to ignore.

Combining signals from widely separated antennae allows us to achieve high resolution at radio wavelengths, making the SKA a potent tool for investigating the habitable zones of Sun-like stars in their infancy. The developing array will be able to image the thermal emission from dust in the habitable zone and chart the flow of the small particles that eventually go into making planets. Imaging features in protoplanetary disks will help us track the formation of giant planets as they open up gaps in the dust, and should offer a look at both the core accretion model of planet formation — the slow growth of dust grains into rocks and planetesimals — and the gravitational instability model, in which planets grow out of disruptions in the surrounding disk.

As for what other kinds of signals the SKA might detect, the project’s planners seem most enthusiastic about SETI. The SKA website claims that its vast network will be sensitive enough to detect an airport radar on a planet 50 light years away. Indeed, a fully fleshed out SKA should be sufficiently sensitive to detect signals comparable to our own television transmitters operating on planets around the stars closest to the Sun. While traditional SETI has proceeded largely through a search for directed beacons, the SKA will allow a search for leakage radiation from nearby stars, while expanding the range of our search for beacons by a factor of 1000.

Given our own brief window of visibility at television wavelengths as we increasingly go to cable and satellite technologies, the prospect of detecting an alien television signal from the handful of stars near enough to make it possible is inconceivably remote. On the other hand, this is the first time we can make a good case that a civilization not much more advanced than our own could indeed pick out signs of intelligent life from all those old Milton Berle broadcasts we’ve sent.

Meanwhile, it’s fascinating to consider other surprises that the SKA might produce. One possibility is the detection of so-called ‘rogue planets’ that wander the interstellar deep without a star. Last year we looked at the work of Heikki Vanhamaki (Finnish Meteorological Institute), whose calculations showed that a gas giant rogue planet with a large moon could produce auroral effects detectable out to a range of 185 light years by an array as formidable as the Square Kilometer Array. Given the number of rogue planets that may be out there (Vanhamaki thinks there could be as many as 2800 within that 185 light year range), detection of at least a few may be a possibility (see Finding an Interstellar Wanderer for more on this work).