Nobody has been anticipating the results from WISE — the Wide-field Infrared Survey Explorer — any more than I have. Speculations about the number of brown dwarfs in the galaxy have been all over the map, with some suggesting they might be as plentiful as M-dwarfs, which make up perhaps 80 percent of the stellar population. But the latest results from our infrared scan of the sky argue a much different result: Brown dwarfs turn out to be considerably more rare than stars, with an initial tally of the WISE data showing just one brown dwarf for every six stars.

Thus Davy Kirkpatrick, a member of the WISE science team at NASA’s Infrared Processing and Analysis Center at Caltech:

“This is a really illuminating result. Now that we’re finally seeing the solar neighborhood with keener, infrared vision, the little guys aren’t as prevalent as we once thought.”

Ouch. The nice thing about a sky full of undiscovered brown dwarfs was that it might serve up interstellar destinations closer than the Alpha Centauri stars. None has been discovered yet, and we’ll apparently have to travel a lot farther to move between average-spaced brown dwarfs than we once thought. Not that these stars — or ‘failed stars’ as they are called because they cannot sustain hydrogen fusion at the core — are not interesting in their own right. We’d like to learn how they form, and how they tread the fine line between planet and star. 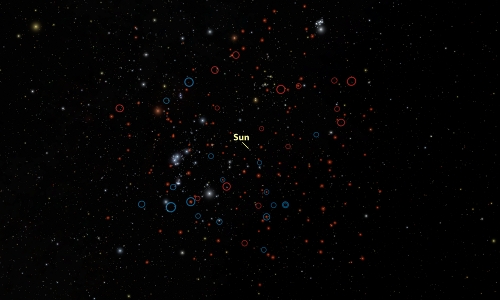 Image (click to download a larger version): Our own back yard, astronomically speaking, from a vantage point about 30 light-years away from the sun. The image highlights the population of tiny brown dwarfs recently discovered by NASA’s Wide-field Infrared Survey Explorer, or WISE (red circles). The image simulates actual positions of stars. All brown dwarfs known within 26 light-years are circled. Blue circles are previously known brown dwarfs, and red circles are brown dwarfs identified for the first time by WISE. The slightly larger M-dwarf stars, which are the most common type of star in the solar neighborhood, are shown with enhanced brightness to make them easier to see. Image credit: NASA/JPL-Caltech.

WISE has already identified the class of brown dwarfs known as Y dwarfs, one example of which is more or less at room temperature (25 degrees Celsius), making it the coldest of all star-like bodies found. This JPL news release says that in its survey to this point, the WISE team can identify about 200 brown dwarfs in the Sun’s vicinity, including 13 of the Y dwarf category. 33 of these brown dwarfs as measured by parallax methods are within 26 light years of the Sun, while 211 other stars also exist within the same volume of space.

Chris Gelino, also at the Infrared Processing and Analysis Center, puts a positive spin on the matter:

“Having fewer brown dwarfs than expected in our celestial backyard just means that each new one we discover plays a critical role in our overall understanding of these cold objects. These brown dwarfs are fascinating objects that are bridging the gap between the coldest stars and Jupiter.”

True enough, but the chances of a brown dwarf closer than Proxima Centauri are rapidly fading, although discovering additional Y dwarfs could adjust the ratio of brown dwarfs upwards slightly, if not as high as once thought. And as the WISE data continue to be sifted for further brown dwarf information, we should also keep in mind that we’re still pretty much in the dark about the number of ‘rogue’ planets out there, moving through the interstellar night without any stellar companion. Planets as much as several times the mass of Jupiter could still be out there, too faint to show up in the WISE data but possible targets for future deep space probes.

For more on rogue stars, see Island-Hopping to the Stars, which examines the work of Louis Strigari (Stanford University). Here you’ll find his estimate that there may be up to 105 compact objects per main sequence star in the galaxy that are greater than the mass of Pluto. It’s an extraordinary figure, but a big part of Strigari’s work relies upon the idea that rogue planets (he calls them ‘nomads’) in open clusters follow the brown dwarf mass function, so it will be interesting to see how the WISE data may eventually affect his calculations.