Fusion and the Starship: Early Concepts

Having looked at the Z-pinch work in Huntsville yesterday, we’ve been kicking around the question of fusion for propulsion and when it made its first appearance in science fiction. The question is still open in the comments section and I haven’t been able to pin down anything in the World War II era, though there is plenty of material to be sifted through. In any case, as I mentioned in the comments yesterday, Hans Bethe was deep into fusion studies in the late 1930s, and I would bet somewhere in the immediate postwar issues of John Campbell’s Astounding we’ll track down the first mention of fusion driving a spacecraft.

While that enjoyable research continues, the fusion question continues to entice and frustrate anyone interested in pushing a space vehicle. The first breakthrough is clearly going to be right here on Earth, because we’ve been working on making fusion into a power production tool for a long time, the leading candidates for ignition being magnetic confinement fusion (MCF) and Inertial Confinement Fusion (ICF). The former uses magnetic fields to trap and control charged particles within a low-density plasma, while ICF uses laser beams to irradiate a fuel capsule and trap a high-density plasma over a period of nanoseconds. To be commercially viable, you have to get a ratio of power-in to power-out somewhere around 10, much higher than breakeven. 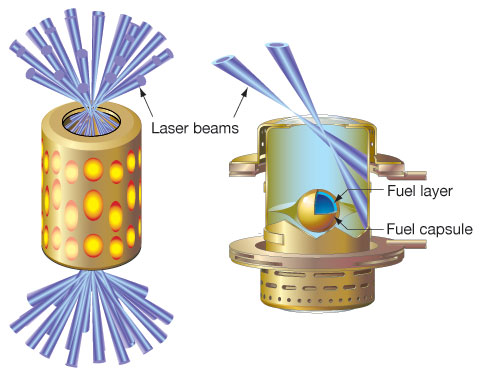 Image: The National Ignition Facility at Lawrence Livermore National Laboratory focuses the energy of 192 laser beams on a target in an attempt to achieve inertial confinement fusion. The energy is directed inside a gold cylinder called a hohlraum, which is about the size of a dime. A tiny capsule inside the hohlraum contains atoms of deuterium (hydrogen with one neutron) and tritium (hydrogen with two neutrons) that fuel the ignition process. Credit: National Ignition Facility.

Kelvin Long gets into all this in his book Deep Space Propulsion: A Roadmap to Interstellar Flight (Springer, 2012), and in fact among the books in my library on propulsion concepts, it’s Long’s that spends the most time with fusion in the near-term. The far-term possibilities open up widely when we start talking about ideas like the Bussard ramjet, in which a vehicle moving at a substantial fraction of lightspeed can activate a fusion reaction in the interstellar hydrogen it has accumulated in a huge forward-facing scoop (this assumes we can overcome enormous problems of drag). But you can see why Long is interested — he’s the founding father of Project Icarus, which seeks to redesign the Project Daedalus starship concept created by the British Interplanetary Society in the 1970s.

Seen in the light of current fusion efforts, Daedalus is a reminder of how massive a fusion starship might have to be. This was a vehicle with an initial mass of 54,000 tonnes, which broke down to 50,000 tonnes of fuel and 500 tonnes of scientific payload. The Daedalus concept was to use inertial confinement techniques with pellets of deuterium mixed with helium-3 that would be ignited in the reaction chamber by electron beams. With 250 pellet detonations per second, you get a plasma that can only be managed by a magnetic nozzle, and a staged rocket whose first stage burn lasts two years, while the second stage burns for another 1.8. Friedwardt Winterberg’s work was a major stimulus, for it was Winterberg who was able to couple inertial confinement fusion into a drive design that the Daedalus team found feasible.

I should mention that the choice of deuterium and helium-3 was one of the constraints of trying to turn fusion concepts into something that would work in the space environment. Deuterium and tritium are commonly used in fusion work here on Earth, but the reaction produces abundant radioactive neutrons, a serious issue given that any manned spacecraft would have to carry adequate shielding for its crew. Shielding means a more massive ship and corresponding cuts to allowable payload. Deuterium and helium-3, on the other hand, produce about one-hundredth the amount of neutrons of deuterium/tritium, and even better, the output of this reaction is far more manipulable with a magnetic nozzle. If, that is, we can get the reaction to light up.

It’s important to note the antecedents to Daedalus, especially the work of Dwain Spencer at the Jet Propulsion Laboratory. As far back as 1966, Spencer had outlined his own thoughts on a fusion engine that would burn deuterium and helium-3 in a paper called “Fusion Propulsion for Interstellar Missions,” a copy of which seems to be lost in the wilds of my office — in any case, I can’t put my hands on it this morning. Suffice it to say that Spencer’s engine used a combustion chamber ringed with superconducting magnetic coils to confine the plasma in a design that he thought could be pushed to 60 percent of the speed of light at maximum velocity.

Spencer envisaged a 5-stage craft that would decelerate into the Alpha Centauri system for operations there. Rod Hyde (Lawrence Livermore Laboratory) also worked with deuterium and helium-3 and adapted the ICF idea using frozen pellets that would be exploded by lasers, hundreds per second, with the thrust being shaped by magnetic coils. You can see that the Daedalus team built on existing work and extended it in their massive starship design. It will be fascinating to see how Project Icarus modifies and extends fusion in their work.

The Z-pinch methods we looked at yesterday are a different way to ignite fusion in which isotopes of hydrogen are compressed by pumping an electrical current into the plasma, thus generating a magnetic field that creates the so-called ‘pinch.’ Jason Cassibry, who is working on these matters at the University of Alabama at Huntsville, is one of those preparing to work with the Decade Module 2 pulsed-power unit that has been delivered to nearby Redstone Arsenal. Let me quote what the recent article in Popular Mechanics said about his thruster idea:

Cassibry says the acceleration of such a thruster wouldn’t pin an astronaut to the back of his seat. During shuttle liftoff, rocket boosters generate a thrust of about 32 million newtons. In contrast, the pulsed-fusion system would generate an estimated 10,000 newtons of thrust. But rocket fuel burns out quickly while pulsed-fusion systems could keep going at a “slow” but steady 24 miles per second. That’s about five times faster than a shuttle drifting around in Earth orbit.

A slow but steady burn like this would be a wonderful accomplishment if it can be delivered in a package light enough to prove adaptable for spaceflight. Given all the background we’ve just examined — and the continuing research into both MCF and ICF for uses here on Earth — I’m glad to see the Decade Module 2 available in Huntsville, even though it may be some time before it can be assembled and the needed work properly funded. Because while we’ve developed theoretical engine designs using fusion, we need to proceed with the kind of laboratory experiments that can move the ball forward. The Z-pinch machine in Huntsville will be a useful step.