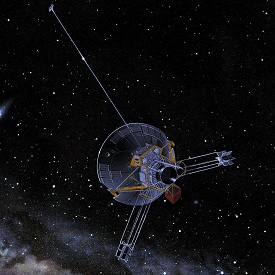 Anomalies are always fascinating because they cause us to re-examine our standard explanation for things. But in the case of the so-called ‘Pioneer anomaly,’ the Jet Propulsion Laboratory’s Slava Turyshev, working with a group of scientists led by JPL’s John Anderson, needed an explanation for practical reasons. The possibility that there was new physics to be detected had the scientists wondering about a deep space mission to investigate the matter, but missions are expensive and the case for a genuine Pioneer effect had to be strengthened or else put to rest.

All of this led Turyshev to begin a multi-year data-gathering mission of his own, scouring records related to Pioneer wherever they might be found to see if what was happening to the spacecraft could be explained. The effect was tiny enough that it was originally dismissed as the result of leftover propellant in the fuel lines, but that explanation wouldn’t wash. Something was causing the two Pioneers to decelerate back toward the Sun, a deceleration that was finally measured as being about 300 inches per day squared (0.9 nanometers per second squared).

I love Turyshev’s quote on the matter, as seen in this JPL news release:

“The effect is something like when you’re driving a car and the photons from your headlights are pushing you backward. It is very subtle.”

Subtle indeed, but combing through telemetry and Doppler data, the team made a number of memorable finds, starting with the discovery of dozens of boxes of magnetic tapes stored under a staircase at JPL itself. This one is a story I always cite when talking about the danger of data loss in a time of digital information. Fully 400 reels of magnetic tape were involved, carrying records from the 114 onboard sensors that charted the progress of each of the two missions. All this information had to be transferred to DVD, as did other data from floppy disks that had been preserved at NASA’s Ames Research Center by mission engineer Larry Kellogg. 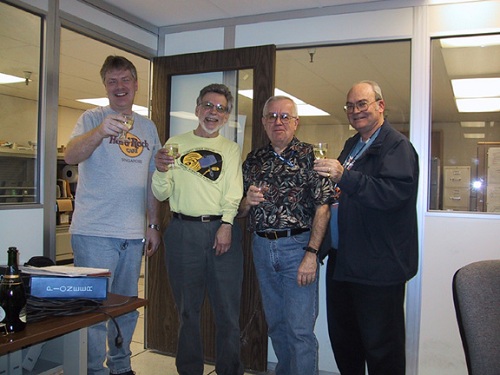 Image: For old times’ sake (and because these guys are heroes of mine), great figures from the Pioneer era, here seen celebrating after what turned out to be one of the last contacts with Pioneer 10 in 2002 (the final contact was made in January of 2003). Left to right: Paul Travis, Pioneer senior flight controller; Larry Lasher, Pioneer project manager; Dave Lozier, Pioneer flight director and Larry Kellogg, project flight technician. Credit: NASA Ames.

We came just that close to losing the key Pioneer data altogether, a reminder of the need to back up information and convert it into new formats to ensure its preservation. The Pioneers were launched at a time when data were routinely saved on punch cards which were themselves then converted into different formats at JPL, and other information had to be tracked down at the National Space Science Data Center at NASA Goddard in Greenbelt, MD. All told, Turyshev and team collected about 43 gigabytes of data and – a close call indeed – one of the tape machines needed for replaying the magnetic tapes, an item about to be discarded.

In the salvaged files from the Pioneers we learn the secret of the anomaly: Heat from electrical instruments and the thermoelectric power supply produces the effect detected from Earth, or in the words of the recently published paper on this research, the anomaly is due to “…the recoil force associated with an anisotropic emission of thermal radiation off the vehicles.” Take account of the thermal recoil force and no anomalous acceleration remains. If this work stands up, the Pioneer anomaly, well worth investigating because it seemed to challenge our standard model of physics, can be explained in a way that is consistent with that model in every respect.

The paper is Turyshev et al., “Support for the Thermal Origin of the Pioneer Anomaly,” Physical Review Letters 108, 241101 (abstract). Credit for the Pioneer image at the top of the page: Don Davis/NASA.