A Closer Look at Medusa

I see that ‘Zarmina’ is back in the news. The informal designation refers to Gliese 581 g, an exoplanet candidate announced by the Lick-Carnegie team in an effort led by Steven Vogt (UC-Santa Cruz). First you see it, then you don’t — Gl 581 g has been controversial from the start, and is now the subject of a new analysis describing a 32-day orbit, a super-Earth in the habitable zone. More on the analysis later in the week, because my purpose today is to keep digging into the options for getting to a place like this once we’re sure it really does exist.

Gl 581 is just over 20 light years from the Sun in the constellation Libra, a red dwarf whose planetary system is one of the nearest yet detected. Among the options for propulsion in a future interstellar probe is Medusa, the brain-child of Los Alamos physicist (now retired) Johndale Solem. As examined here on Friday, Medusa is a nuclear-pulse system, like Orion in that it relies on the explosion of a series of atomic bombs to propel the vehicle. Where Medusa changes the equation is in its use of a gigantic sail, or ‘spinnaker,’ which replaces Orion’s massive pusher plate. The gossamer sail is connected to the payload by high-tensile strength cables.

Because I’m just finishing up Kelvin Long’s Deep Space Propulsion (subtitled ‘A Roadmap to Interstellar Flight’), I was curious to see what Long had to say about Medusa, a concept that has received less attention than other nuclear methods like Orion or Daedalus’ inertial confinement fusion (ICF) design. Long wonders whether Medusa might be useful as a deceleration mechanism for a star probe:

As a probe approaches a target destination, the sail is unfurled rearwards with detonations causing a force in the negative thrust direction to the direction of motion. This may only require a small quantity of units to produce this result. Alternatively, ICF capsules could be ignited by laser beams rearwards of the vehicle, giving rise to the same effect, but on a more moderate level.

The immediate objection to this is the complexity of the Medusa mechanism, but Long anticipates this:

One of the biggest problems for the Medusa sail being used in a deceleration mode however is the reliability of it deploying in deep space after decades of being stored away. If the sail doesn’t deploy, then the probe will essentially be a flyby probe with limited observing time of the target star system and potentially left with a lot of unused units, which would have to be destroyed safely in a controlled way by the vehicle main computing system.

Make no mistake about it, Medusa is a complex system (see Friday’s post for a diagram of the propulsion cycle). Solem’s initial Los Alamos report refers to a canopy with a radius of 500 meters. The plan is to spin-deploy it and its 104 tethers, each made of high-strength polyethylene (aligned polyethylene) material, though Solem notes that superior materials will be available by the time the kind of manned missions he envisions come into play. Remember that he was thinking in terms of an interplanetary mission with Mars as the primary destination. Solem’s sketch, at the end of the Los Alamos report, gives you a feel for the idea, but translate this webwork of lines into fully 10000 tethers and ponder the issues such a contraption raises. 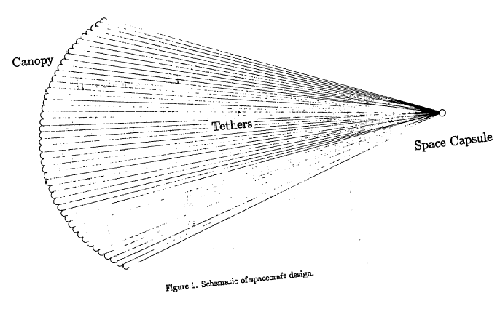 The problem of deployment and storage is enormous, and I can see why Long would wonder about re-deploying such a system after a lengthy interstellar transit, which is why he also considers it in terms of a first-stage booster, to be ejected after use. On the other hand, Solem’s calculations in the Los Alamos report and elsewhere showed that the canopy should be able to withstand the ignition of nuclear devices that would propel it. The tethers are another matter — as noted by ‘Eniac’ in the comments to Friday’s post, the tethers have to absorb the blast energy and are obviously crucial to the design. Like Robert Forward, Solem liked to think big, and in this case a gigantic canopy with extremely long tethers was expected to minimize radiation dangers for the crew and allow the tethers to survive the acceleration phase of the mission.

How fast could Medusa fly? The answer depends on the number of propulsion units detonated, with each detonation pulse adding to the velocity. Long also points out that the larger the canopy area, and the closer the canopy is to the detonation point, the higher the velocity. Using the values given in Solem’s 1993 paper in the Journal of the British Interplanetary Society, Long comes up with a specific impulse of 4100 kilometers per second, with an exhaust velocity in the region of 40 km/s.

Like Orion, Medusa runs into the problem of putting nuclear materials into space, one that Solem was all too familiar with. In the conclusion of the Los Alamos report, he has this to say:

We are currently prohibited by treaty from: (1) deploying weapons of mass destruction in space and (2) testing nuclear weapons in space. MEDUSA violates neither the letter nor the spirit of either prohibition, but it does use nuclear explosives. The radioactive debris from MEDUSA’s exhaust is so finely dispersed that it will be nearly undetectable. I assert that MEDUSA’S net environmental impact is less than NERVA; you have to do something with the spent reactor. I see no reason why nuclear explosive propulsion for interplanetary missions cannot be made politically acceptable. Perhaps we can be more creative and consider an international mission in which the nuclear explosives were jointly supplied by the superpowers. What a wonderful approach to nuclear disarmament and the enhancement of science for the benefit of all humanity!

Orion proponents make the same case, that their design would allow us to use up our nuclear stockpile for peaceful purposes while offering large vehicles for deep space exploration. It’s a utopian vision, and in both cases, it’s hard to see it happening anytime soon. Nuclear-pulse propulsion may make sense in space, but you first have to get the nuclear materials off the planet. The nuclear issue is one reason Friedwardt Winterberg, back in 1971, developed the idea of using intense, relativistic electron beams to ignite fusion, a method that captured the attention of the team developing Project Daedalus for the British Interplanetary Society. In such ways do the problems of one propulsion concept play into the revised thinking that fuels the next.