Many of the interstellar concepts I write about in these pages take on a life of their own. After the initial brainstorming, the idea gets widely enough disseminated that other scientists take it on, looking to modify and improve on the original concept. That’s been true in the case of solar sails and the more recently devised ‘lightsails,’ which use beamed energy from a laser or microwave source to drive the vehicle. We continue to study magnetic sails — ‘magsails’ — and various nuclear options like the inertial confinement fusion that powered Daedalus and perhaps Icarus. Sometimes insights arise when ideas are grafted onto each other to create a hybrid solution. 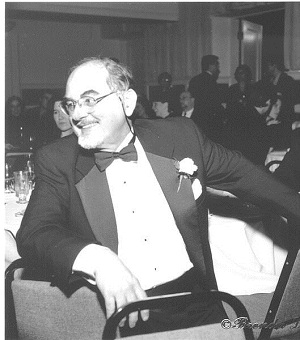 The idea I want to examine today, a hybrid design combining a Bussard-style interstellar ramjet with laser beaming — exemplifies this mix and match process. Working with Daniel Whitmire, A. A. Jackson, a frequent commenter and contributor here on Centauri Dreams, pondered the various issues the Bussard ramjet had run into, including the difficulty in lighting the proton/proton fusion reaction Bussard advocated early in the process. Writing at a time not long after he had finished up a PhD in relativistic physics (at the University of Texas), Jackson conceived the idea of beaming energy to the spacecraft and discovered that the method offered advantages over the baseline Bussard design. The laser-powered ramjet is a fascinating concept that has received less attention than it deserves.

Bussard’s ramjet, you’ll recall, lit its fusion fires using reaction mass gathered from the interstellar medium by a huge magnetic ram scoop, which itself has proven problematic given the drag issues such a scoop introduces. The other way to power up a starship using an external source of energy is to beam a terrestrial or Solar System-based laser at the departing craft, which has deployed a lightsail to draw momentum from the incoming photons. Jackson and Whitmire found the latter method inefficient. Their solution was to beam the laser at a ramjet that would use reaction mass obtained from a Bussard-style magnetic ram scoop. The ramjet uses the laser beam as a source of energy but, unlike the sail, not as a source of momentum.

Running the numbers and assuming all photons transmitted by the laser will be absorbed by the ship, the authors discovered that the laser-powered ramjet (LPR) is superior to the baseline Bussard ramjet at low velocities, while superior to the laser-pushed sail at all velocities. The Bussard design becomes the most efficient of the three at velocities equal to and above about 0.14 c. The laser-powered ramjet, then, solves at least one of the Bussard vehicle’s problems, the fact that it has to get up to a significant percentage of lightspeed before lighting its fusion reaction. LPR propulsion could be used up to 0.14 c, with the vehicle switching over to full interstellar ramjet mode to achieve high efficiency at relativistic velocities.

The laser-powered ramjet offers other advantages as well. Think back to some of Robert Forward’s laser sail concepts and you’ll recall the problem of deceleration. With the sail powered by a laser beam from the Solar System, it’s possible to reach velocities high enough to take you to the nearest stars in a matter of decades rather than centuries. But how do you slow down once you arrive? Conceiving a manned mission to Epsilon Eridani, Forward came up with a ‘staged’ solution in which the sail separates upon arrival, with the large outer sail ring moving ahead of the vehicle and reflecting beamed laser energy to the now smaller inner sail, thus slowing it down. It would be so much easier if the beam worked in both directions!

But with the laser-powered ramjet, a round trip can be made using a single laser beam because the beam is being used as a source of energy rather than momentum. Jackson and Whitmire showed that the efficiency in the deceleration phase of the outbound journey as a function of velocity is the same as for the acceleration phase. And on the return trip, the energy utilisation efficiency is more favorable in both the acceleration and deceleration phases because the ship is traveling into the beam. In fact, the laser-powered ramjet is superior to both the laser sail and the Bussard ramjet even at high fractions of the speed of light when traveling into the laser beam.

Let’s go over that again: Jackson and Whitmire’s calculations focus on the energy utilisation efficiency parameter, showing that the laser-powered ramjet is superior to the laser sail at all velocities, whether the ship is receding from the beam or approaching (moving into the beam). The LPR is also superior to the Bussard ramjet at velocities less than about 0.14 c when receding from the beam, and superior to the Bussard design at all velocities when approaching. Add to this that the LPR concept requires no onboard proton-burning reactor — the authors assume the use of Whitmire’s ‘catalytic’ ramjet using the CNO (carbon-nitrogen-oxygen) cycle — and that the LPR’s power requirements are less than those of the laser sail. 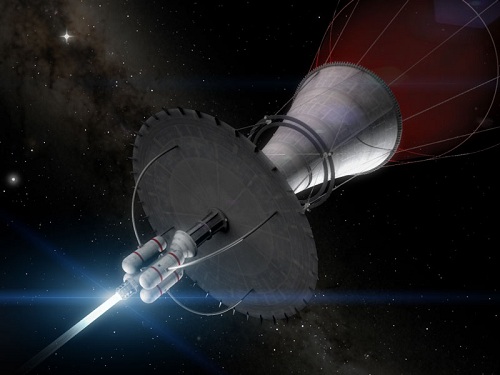 You can imagine a future civilization taking advantage of these principles after establishing a presence around another star. A beaming system in the Solar System could eventually be complemented by one around the other star, so that no matter which way the ship was traveling, it would always be moving into the beam on a round-trip flight. I’ve sought in vain for an illustration of this concept in science fiction (and I keep wondering if Larry Niven hasn’t picked up on it somewhere), but I can find no example. It seems prime material for science fictional use.

Jackson and Whitmire looked at still another wrinkle on this notion in a paper the following year, about which more tomorrow. Today’s paper is “Laser Powered Interstellar Ramjet,” Journal of the British Interplanetary Society Vol. 30 (1977), pp. 223-226.