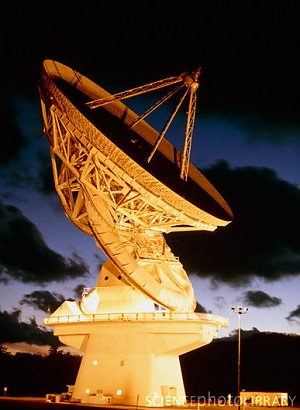 Michael Chorost is a science writer whose research interests grow directly out of his personal experience. You may have already read about his struggle with hearing loss — a problem he has dealt with since childhood — in his book Rebuilt: How Becoming Part Computer Made Me More Human (Houghton Mifflin, 2005). It’s natural to find Chorost writing often on things like cochlear implants and neurotechnology, but intriguing to find that he is also a SETI advocate, and one who believes his hearing issues have a bearing on a field he has studied passionately all his life. In fact, the book he plans next, which follows on 2011’s World Wide Mind (Free Press) will be a SETI title.

So what’s the connection between deafness and hunting for signs of an extraterrestrial civilization? Chorost sees it as a matter of isolation and communication, as he notes in a recent entry on the Psychology Today site. Is the entire human race subject to deafness? It is in the sense that we have no idea whether or not we live in isolation or in a galaxy populated with other intelligences. Our ignorance of our place in the universe becomes its own kind of perception problem, a deafness SETI has been trying in vain to remedy for the last fifty years.

It’s an interesting idea, and one the author develops by looking at a recent article by Atul Gawande in The New Yorker. Gawande focused on the effects of solitary confinement on people, relating the story of one prisoner held in such conditions in a maximum security prison who began to lose his mind. The argument is that without encounters with other people, we find our psychic integrity threatened. In the case under study, prolonged isolation led to compulsive behavior, panic attacks, hallucinations and increasing paranoia. Looking at how people relate to those around them, Chorost wonders about a planet-wide pattern of isolation:

I think the analogy is pregnant and poignant, but unproven. Still and all: crazy prisoners, crazy planets. Contact and communication with other planets might have a calming effect on a civilization, giving it perspective and self-knowledge. After all, it’s mainly through interaction with other people that we get feedback on our behavior. We know ourselves by how people reflect us back to ourselves. The Other is a kind of mirror. Right now, humanity has no way to see itself in perspective. We just don’t know what’s abberational in intelligent species, and what’s normal.

So we could be looking at one more possibility for explaining the Fermi paradox. Extraterrestrials are not here because they think we’re lunatics. It’s not a likely scenario, and Chorost doubts it applies, but there is something to be said for the idea of planets facing existential loneliness:

I think that deafness and planetary isolation have something in common. A deaf person knows how easy it is to become profoundly cut off. (If civilization collapsed and the electricity went out for good, my rechargeable cochlear implant batteries would last me about a week.) I think of our planet swimming in the starry blackness, studded with radio telescopes peering anxiously into the void—and hearing nothing. To me, that feels a lot like being deaf.

When I was growing up, my uncle from Florida used to drive up once a year for an extended visit. He was already going deaf at the time and thought it was from the effect of aircraft engines (he had serviced radio equipment for Eastern Airlines his entire career). In any case, over the years his deafness became profound. Like Chorost, he was also fascinated with SETI and the idea of finding other intelligences. He had huge problems communicating with people in conversation, but he built a world out of books and kept a massive library. I often wondered, when deafness closed off his interests in music and shortwave radio, whether he felt the same sense of bafflement I feel when walking on a starry night, wondering whether there is anyone out there sharing this universe, pointing instruments into the sky and asking why no one speaks?