Not all that long ago we assumed habitable planets needed a star like our Sun to thrive, but that view has continued to evolve. M-class red dwarfs may account for as many as 80 percent of the stars in our galaxy, making habitable worlds potentially more numerous around them than anywhere. And let’s extend our notion of habitability to what Luca Fossati (The Open University, UK) and colleagues call a Continuous Habitable Zone (CHZ). Now things really get interesting, for a red dwarf evolves slowly, so planets could have a CHZ with surface water for billions of years. 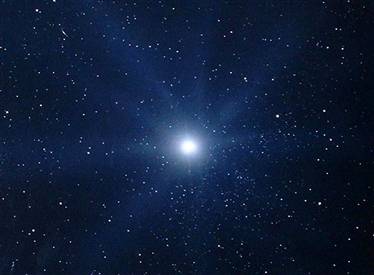 But what about white dwarfs? Stellar evolution seems to rule out habitable worlds around them because we normally think of stars entering their red giant phase and destroying their inner planets enroute to becoming a white dwarf. But can a new planetary system emerge from the wreckage? We’ve already found planets orbiting close to the exposed core of a red giant (KOI 55.01 and KOI 55.02), showing that the end of main sequence evolution isn’t necessarily the end of planetary survival. We’ve also found evidence in the metallic lines in the spectra of white dwarfs for rocky bodies close to such stars, a kind of ‘pollution’ thought to be caused by the accretion of small, rocky worlds or perhaps planetesimals (see Planetary Annihilation Around White Dwarfs for more).

Image: Almost all small and medium-size stars will end up as white dwarfs, after all the hydrogen they contain is fused into helium. Near the end of its nuclear burning stage, such a star goes through a red giant phase and then expels most of its outer material (creating a planetary nebula) until only the hot (T > 100,000 K) core remains, which then settles down to become a young white dwarf which shines from residual heat. Credit: Jonathan Saurine/Science Vault.

The conditions on planets orbiting close to a cool white dwarf might be relatively benign. What Fossati and team show is that the cooling process in these stars slows down as their effective temperature approaches 6000 K, producing a habitable zone that can endure up to eight billion years. And it turns out that white dwarfs offer advantages M-dwarfs do not, providing a stable luminosity source without the flare activity we associate with younger M-class stars. As you would expect, a cool white dwarf has a habitable zone close to the star, ten times closer than for M-dwarfs. One recent study has used this to argue that a Mars-sized planet in the white dwarf CHZ would be detectable with today’s ground-based observatories even for faint stars.

But there are other options including polarized light that may be used to detect a planet with an atmosphere around a white dwarf. Normally, starlight is unpolarized, but when light reflects off a planetary atmosphere, the interactions between the light waves and the molecules in the atmosphere cause the light to become polarized. The paper notes that the polarization due to a terrestrial planet in the CHZ of a cool white dwarf would be larger than the polarization signal of a comparable planet in the habitable zone of any other type of star except brown dwarfs. Analyzing polarization is thus a viable way to detect close-in rocky planets around white dwarfs.

Would the ultraviolet radiation put out by a white dwarf disrupt the formation of DNA molecules? Fossati and company created a computer model to study the DNA dose expected for an Earth-like planet in the white dwarf habitable zone using an Earth atmosphere model. The result:

The DNA-weighted UV dose encountered at the surface of an Earth-like planet in the white dwarf CHZ becomes comparable to that of an exoplanet in the habitable zone of a main sequence star at approximately 5000 K. Interestingly, present-day solar conditions produce an average dose on Earth a factor of only 1.65 less than that for a white dwarf with solar Teff [effective temperature]. Varying terrestrial atmospheric conditions at times produce DNA-weighted doses on Earth as high as that on a CWD planet… [T]he DNA-weighted dose for a hypothetical Earth-like planet around a CWD is remarkably benign from an astrobiological perspective, for an extremely long period of time.

So white dwarfs, the remnants of those stars not massive enough to become a neutron star, may provide us with interesting venues for life. We can even imagine a typical star going through its pre-red giant phase with a planetary system nurturing life and then, after the red giant phase is complete, beginning a post Main Sequence astrobiological phase with a planetary system in a new configuration. The notion is plausible on the strength of this paper, though the researchers point out that 10 percent of all white dwarfs host magnetic fields that could be problematic for life. This paper assumes the hosting white dwarf is a non- or only weakly magnetic star.

The paper is Fossati et al., “The habitability and detection of Earth-like planets orbiting cool white dwarfs,” accepted for publication in Astrophysical Journal Letters (abstract). Thanks to Adam Crowl for the pointer. For more on planets around red giants, see Planets Survive Red Giant Expansion.