I’m not surprised that Michael Chorost continues to stimulate and enliven the SETI discussion. In his most recent book World Wide Mind (Free Press, 2011), Michael looked at the coming interface between humans and machines that will take us into an enriched world, one where implants both biological and digital will enhance our experience of ourselves and each other. You’ll recall that it was a cochlear implant that restored hearing to this author, and doubtless propelled the thinking that led to this latest book. And it was the issue of hearing and communication that we looked at in an earlier discussion of Chorost’s views on SETI.

That conversation has continued in Michael’s World Wide Mind blog, as he ponders some of the comments his earlier ideas provoked on Centauri Dreams. In particular, how would we ever come to understand an extraterrestrial civilization if it differed fundamentally from us? Chorost thinks the problem is not biological, that no matter how aliens might look, we could study them to understand how they function. What would be far more tricky are questions of technology and culture, and here he brings into play Ken Wilber’s ideas about evolutionary development, notions that can be summarized in the chart immediately below. 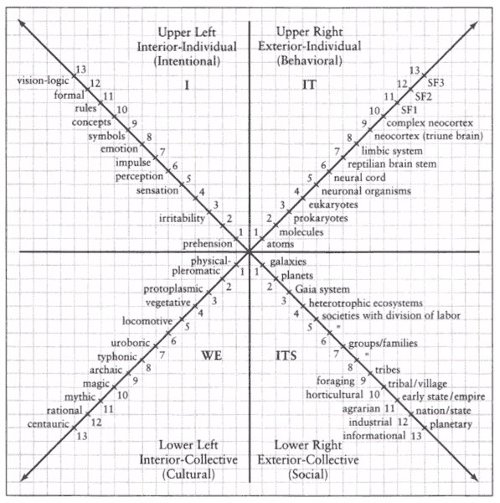 Image: Based on Ken Wilber’s ideas of an ‘all-quadrants, all-levels’ model of evolutionary development, this chart shows four axes that trace the development of a society. Credit: Ken Wilber via Michael Chorost.

If you browse through the diagram, you’ll note the likelihood that a society at level 10 on one axis will be at level ten on the other three. Chorost explains:

For example, level 10 in the upper-left quadrant is conceptual thinking. It’s aligned with level 10 in the other quadrants, which are the complex neocortex, the tribe/village, and magical modes of thought. When brains developed complex neocortexes, that was when they were able to sustain the social structures of tribes and villages, along with rituals of propitiation. One could also put it the other way around: tribal structures facilitated the development of the modern neocortex. These are all intimately related and mutually constituting. Each level on each axis is dependent upon, and enables, the others.

All of which seems to make sense, but what we should be pondering are the implications of extending each axis indefinitely. An advanced extraterrestrial species could easily register well beyond 10 on the chart along all four axes, making our need to relate human experience to what we encounter that much more difficult. We may, in fact, lack the neural structures to conceptualize and analogize these advanced levels because an alien culture would have developed modes of thought based on its own experience that are too remote from our more limited grid.

It’s always fascinating to portray encounters with aliens and always a bit aggravating when they show up in Hollywood as clearly human with a few tweaks to make them seem different. But even as we fuss with the producers of such shows for their lack of imagination (or budget), we’re missing the bigger picture. The problem is that we may find our galactic neighbors to be incomprehensible on every level. Here I think, as I often do, of the Strugatsky brothers’ novel Roadside Picnic, in which alien visitors have no apparent interest in humans at all, leaving behind them artifacts that no one can figure out. Their presence tells us that we are not alone, but their departure leaves us with questions of intent — what was their purpose here, and what are the ‘empties’ (the book’s term for artifacts) that the aliens have abandoned? 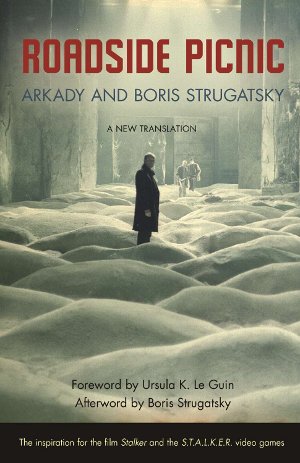 In fact, Roadside Picnic gets across the sense of the inexplicably alien better than almost any novel I have ever read — it should definitely be on the short-list for Centauri Dreams readers. The so-called ‘Visitation’ in the novel involves six different places where the aliens appeared, though they were never actually seen by people living nearby. The ‘zones’ of visitation are filled with unusual phenomena and bizarre items like the ‘pins’ found by the protagonist, who is himself a ‘stalker’ who finds and sells alien oddities like these:

In the electric light the pins looked shot with blue and would on rare occasion burst into pure spectral colors — red, yellow, green. He picked up one pin and, being careful not to prick himself, squeezed it between his finger and thumb. He turned off the light and waited a little, getting used to the dark. But the pin was silent. He put it aside, groped for another one, and also squeezed it between his fingers. Nothing. He squeezed harder, risking a prick, and the pin started talking: weak reddish sparks ran along it and changed all at once to rarer green ones. For a couple of seconds Redrick admired this strange light show, which, as he learned from the Reports, had to mean something, possibly something very significant…

But what? The novel is shot through with ambiguity and mystery. It’s the mystery of Wilber’s diagram extended indefinitely in all four directions, assuming structures of thinking that may be so far beyond our experience as to defeat our every inquiry. In human terms, we can imagine the difficulty in trying to explain sunset colors to a color-blind person. Chorost uses a much better example: The difference between a non-literate society and a literate one. Could science develop in the absence of a written language in which to couch its arguments and record its findings? And just how you would explain these questions and the need to perform these functions with language to someone who had never experienced reading or writing?

It’s possible to see ways around these problems, as Chorost explains:

I’d like to be optimistic. I’d like to think we’d be better off than preliterates puzzling over Wikipedia on an iPad. In his book The Beginning of Infinity, David Deutsch argues that humans crossed a crucial threshold with the scientific method. We now know that everything is explainable in principle, if we make the effort to understand it. Arthur C. Clarke famously said that any sufficiently advanced technology will seem like magic. This may be true, but we will not mistake it for magic. We have a postmodern openness to difference, a future-oriented culture, and well-established methodologies for studying the unknown. Our relative horizons are much larger than our ancient ancestors’ were.

I’m a bit more ambivalent. Yes, we would make every effort to explain an extraterrestrial culture. But I think that even our best methodologies will have trouble untangling motives and intent if confronted with a civilization substantially older than our own. The solution may not be in our hands but theirs (if they have hands). How concerned will they be in establishing a relationship with us? In the Strugatskys’ novel, the aliens have come and gone, leaving behind them little more than enigma. Roadside Picnic gives us a glimpse of what an extraterrestrial encounter may be like unless the culture we meet finds us worth the effort to introduce itself.