What I have in mind today is a book review, but I’ll start with a bit of news. The word from Houston is that Ad Astra Rocket Co., which has been developing the VASIMR concept from its headquarters not far from Johnson Space Center in Texas, has been making progress with its 200-kw plasma rocket engine prototype. VASIMR (Variable Specific Impulse Magnetoplasma Rocket) offers constant power throttling (CPT), which would allow it to vary its exhaust for thrust and specific impulse while maintaining a constant power level. CPT has now been demonstrated in a June test, as was reported at the recent AIAA Joint Propulsion Conference in Atlanta and in trade publications like Aviation Week, a useful step forward for the program.

What to make of VASIMR’s chances? When assessing something like this, I turn to my reference library, and because I’ve recently been reading Kelvin Long’s Deep Space Propulsion, I wanted to see what he said about VASIMR. Long treats the subject in a chapter on electric propulsion, a form of pushing a rocket in which a fuel is heated electrically, after which its charged particles are accelerated by electric and/or magnetic fields to provide thrust. The VASIMR wrinkle on electric propulsion is to use a fully ionized gas that has been heated hot enough to become a plasma, higher than the norm for most electrical systems.

Long’s explanation refreshed my memory on how all this works:

The engine is unique in that the specific impulse can be varied depending upon the mission requirement. It bridges the gap between high thrust low-specific impulse technology (e.g., like electric engines) and can function in either mode. The company who designs the VASIMR engine talks about possible 600 ton manned missions to Mars powered by a multi-MW nuclear electric generated VASIMR engine, reaching Mars in less than 2 months. 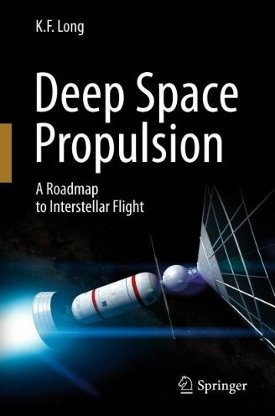 The proof is in the performance, of course, and we’ll see how VASIMR does in actual flight conditions. A 2015 flight prototype is in the works thanks to Ad Astra’s agreement with NASA. But Long’s book bears the subtitle “A Roadmap to Interstellar Flight,” so it’s intriguing to look at long-range developments with this technology. In theory, writes Long, a VASIMR drive could reach an exhaust velocity of up to 500 kilometers per second, corresponding to a specific impulse of 50,000 seconds, which translates into an Alpha Centauri crossing in 2200 years.

Now 2200 years may be progress — after all, Voyager-class speeds take 75,000 years to travel a similar distance — but if we’re talking about practical missions, VASIMR looks to be more valuable in the Solar System, assuming the technology lives up to Ad Astra’s expectations. But Long points something else out. A VASIMR engine could be considered a scaled down fusion development engine. The components that are similar to a fusion engine include the use of electromagnets to create a magnetic nozzle and the storage of low-mass hydrogen isotopes, along with techniques for energizing and ionizing a gas. Long sees VASIMR development as a way forward for understanding how to control plasmas in an engine for deep space.

A Survey of Interstellar Concepts

Insights like that make Deep Space Propulsion an instructive read. I find myself going back to specific sections and finding things I missed. The book has textbook aspects, containing practice exercises after each chapter, but it’s also enlivened by its author’s passion for finding the right tools to make star missions a reality. Long thus works his way through the major options, as we’ve seen in various recent Centauri Dreams articles where I’ve quoted him. Solar sails and their beamed power ‘lightsail’ cousins make their appearance, and so do futuristic concepts like the Bussard ramjet and its numerous variants. Just keeping up with the ramjet idea and how it has mutated over the years is an exercise in itself, but Long also covers antimatter, nuclear pulse (Orion) and exotic ideas like Johndale Solem’s Medusa.

It’s fascinating to work through these chapters and see how various physicists and engineers have tackled the interstellar challenge, spinning out a concept that is seized upon by others, modified, hybridized, and re-purposed as problems emerge and others solve them. Long was the guiding force behind the launch of Project Icarus, which is a re-examination of the British Interplanetary Society’s classic starship design of the 1970s. It makes sense, then, that fusion, which powered Daedalus, should be a major concern and a key element of the book.

Here it’s easy to get lost in the kind of details that, for me, make interstellar theorizing so endlessly fascinating. The BIS engineers knew their spacecraft would be vast to accommodate the propulsion needs of a vehicle designed to make the 5.9 light year crossing to Barnard’s Star, then thought to have planets. Work at Los Alamos and Lawrence Livermore National Laboratory had developed the idea of pulsed micro-explosions of small pellets using laser or electron beams to produce the needed fusion reaction. Long notes the contribution of Friedwardt Winterberg, whose study of electron-driven ignition became the core ideas of the Daedalus engine.

Winterberg is still, thankfully, with us, producing interstellar work that we’ve talked about here on Centauri Dreams, a remarkable link to a classic era of discovery considering that his PhD advisor was Werner Heisenberg. Long goes through Winterberg’s contribution and its adoption by Daedalus, work which continues to inspire the Icarus team as they develop and extend the Daedalus design. What the BIS came up with in the ‘70s was gigantic:

The propulsion system for Daedalus used electron beams to detonate 250 ICF [inertial confinement fusion] pellets per second containing a mixture of D/He3 fuel. The fusion products would produce He4 and protons, both of which could be directed for thrust using a magnetic nozzle. The D/He3 pellets would be injected into the chamber by use of magnetic acceleration, enabled by use of a micron-sized 15 Tesla superconducting shell around the pellet. The complete vehicle was to require 3 X 1010 pellets, which if manufactured over 1 year would require a production rate of 1,000 pellets per second.

Not only do you have extraordinary rates of production but you have the problem of finding the helium-3, which the Daedalus team addressed by considering a 20-year mining operation in the atmosphere of Jupiter. We’ll see how the Icarus designers solve the helium-3 issue, but it’s clear that the kind of nuclear starship envisioned by Daedalus would require an infrastructure throughout the Solar System that could reliably maintain large human crews in deep space and move industrial processes and products between the planets at will. There’s that ‘roadmap’ idea Long is talking about, as one developmental step builds upon another to make more advances possible. We can also hope that such advances teach us how best to contain our costs.

Making the Case for Star Missions

Like Gregory Matloff and Eugene Mallove, whose 1989 book The Starflight Handbook reviewed all the interstellar options then at work in the literature, Long’s Deep Space Propulsion offers a mathematical treatment of certain key ideas, especially useful for those coming up to speed on fundamentals like the rocket equation. Long throws in, in addition to the math, a good dose of interstellar advocacy. He’s keen on seeing design studies like Icarus continued around other possible technologies, so that we have constantly developing iterations of everything from nuclear rockets (NERVA) to microwave-beamed sails (Starwisp), a basis upon which future teams will finally build a starship. Along the way, generations of starship engineers learn and master their trade.

Could contests like the Ansari X-Prize be adapted for deep space missions? The book goes into some detail on how this model might work as a way of increasing the technological readiness of different propulsion schemes. But the process is lengthy:

…other authors have estimated the launch of the first interstellar probe will occur by around the year 2200 AD. This includes one author who looked at velocity trends since the 1800s. Factoring the likely uncertainties associated with the assumptions of these sorts of studies, particularly in relation to assuming linear technological progression, it is likely that the first interstellar probe mission will occur sometime between the year 2100 and 2200. To achieve this will require a significant advance in our knowledge of science or an improvement in the next generation propulsion technology. Given the tremendous scientific advances made in the twentieth century, it at least does not seem unreasonable to think that such a technology leap may in fact occur.

Creation of an Institute

Toward that end, Long has recently announced the formation of what he has called ‘the world’s first dedicated Institute for Interstellar Studies,’ whose logo you see here. The Institute is currently building a website and in a recent brochure states an accelerated goal for an interstellar mission:

“Our mission is to conduct activities or research relating to the challenges of achieving robotic and human interstellar light. We will address the scientific, technological, political and social and cultural issues. We will seed high-risk high-gain initiatives, and foster the breakthroughs where they are required. We will work with anyone co-operatively from the global community who desires to invest their time, energy and resources towards catalyzing an interstellar civilization. Our goal is to create the conditions on Earth and in space so that starlight becomes possible by the end of the twenty first century or sooner by helping to create an interplanetary and then an interstellar explorer species. We will seek out evidence of life beyond the Earth, wherever it is to be found. We will achieve this by harnessing knowledge, new technologies, imagination and intellectual value to create innovative design and development concepts, defined and targeted public outreach events as well as cutting edge entrepreneurial and educational programs.”

We’ll track this as it develops — for more information, contact Interstellarinstitute@gmail.com. Meanwhile, those wanting to keep up with the primary interstellar concepts should keep a copy of Deep Space Propulsion at hand. I started this post with a look at VASIMR because the whole range of electric propulsion concepts is intricate and in many ways confusing. Long’s chapter on this goes into the major divisions between the thruster types and untangles the issues around Hall Effect thrusters, MPD thrusters, pulsed plasma and VASIMR in ways I could understand. This is a book that will get plenty of use, and my copy is already filling with penciled-in notes.