To Detect a Starship

Several Centauri Dreams readers passed along Seth Shostak’s latest article on SETI in IEEE Spectrum, a piece that invokes the ‘Wow!’ signal at Ohio State and goes on to make the case for continuing the hunt. Shostak thinks both the ongoing search for exoplanets and refinements in our signal detection technology, including optical SETI, should keep us active. “No, we haven’t found any signals so far, but there’s a growing incentive provided by new findings in astronomy and biology, and the instruments are getting better,” he writes. “Thirty-five years from now, we may really find a signal that will make us say ‘Wow!'”

The IEEE Spectrum piece doesn’t break any new ground, but it’s another example of the ‘Wow!’ signal getting broader coverage, and I now find that people routinely bring the Ohio State event up when I talk to audiences about SETI. Meanwhile, let’s think about some truly exotic possibilities when it comes to detecting extraterrestrial life. Would it be possible, for example, to detect signs of an alien civilization not just by a beacon, but by a spacecraft in transit between the stars? I was intrigued to learn that Robert Zubrin, of Mars Society fame, has investigated the question in a 1995 paper.

Zubrin has interstellar credentials, of course, most notably in his work with Dana Andrews on the Bussard ramjet and the question of drag, which has fed into studies of magsails and their uses. I also highly recommend his book Entering Space: Creating a Spacefaring Civilization (Tarcher, 1999) for its overview of interstellar concepts, a helpful source for those new to the interstellar field. In the 1995 paper on spacecraft detection, he makes an interesting point. One of the things that muddies the SETI investigation is our lack of knowledge of how aliens think, so that we are left to guess at what a species might do if trying to communicate. By searching for the spectral signal of an interstellar transportation system, we can abandon that concern:

The advantage of our approach is that the characteristic power levels associated with interstellar transportation systems are many orders of magnitude greater than those required for communication, and so the signal strength may be much greater. Furthermore, unlike communication which is governed by a fairly arbitrary selection of technology and mutually agreed upon conventions, transportation systems are governed much more stringently by the laws of physics. No understanding of alien psychology is necessary to detect a starship.

But what kind of starships are we looking for? For the purposes of analysis, Zubrin has to rule out breakthroughs in physics that an extraterrestrial culture may have made but we have not — we have no way to characterize a ship propelled by something exotic like zero-point energy. But antimatter, fusion and fission rockets, as well as magnetic sails, come within his province. If the alien starship works within the limits of physics as we know them, then a speed of about 10 percent of lightspeed seems minimal — Zubrin selects this figure under the assumption of human-like life-spans so that the mission can be completed within a working lifetime. He also assumes that technological creatures are social and need a large crew for a long voyage. 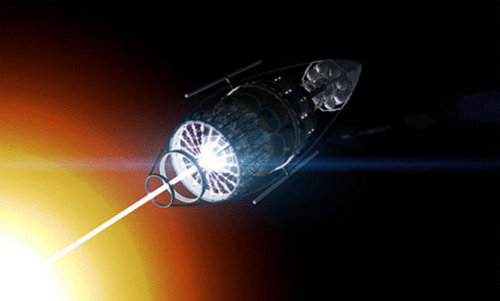 Image: Could we detect an interstellar spacecraft more readily than an accidental signal or even a beacon from an extraterrestrial civilization? Credit: Adrian Mann.

We’re left with an optimum starship of considerable mass, especially when we throw in shielding against cosmic rays and near relativistic interstellar particles. Let’s assume 1,000,000 tons, with an exhaust velocity of 0.1c, with average accelerations on the order of 0.1 m/s2. Zubrin works out a power requirement for his ‘standard’ starship of 1500 TW, which equals 0.9 percent of all the sunlight falling on the Earth, a figure only 11 orders of magnitude less than the total output of the Sun. By comparison, a Saturn V’s S1 stage had a power output of 0.1 TW. 1500 TW sounds extreme (Zubrin cites a collective human use of about 12 TW today) but if you keep power production growing at a rate of 2.6% per year, the rate current when the paper was written, then we hit 1500 TW around the year 2180 and get to 30,000 TW in 2300:

…the maximum size of individual power plants has been growing at a rate of 2 orders of magnitude per century for the past two hundred years. Thus if present trends continue, the apparently astronomical power required of our standard starship should be common in 3 or 4 centuries, a blink of an eye on the cosmic time scale.

Signature of a Starship

Zubrin is interested in the spectral signature of the standard starship, which should be different from an astrophysical object because its position and speed should change over time. The hope would be that future space telescopes or even terrestrial instruments could detect an object like this in many wavebands. The problem becomes one of collecting enough photons on a detector. High-power antimatter drives should emit huge amounts of gamma rays, but at interstellar distances we get a rate of impacts per square meter of collection area that is quite small. The standard starship may evade detection.

Consider: Zubrin calculates that a starship putting out 10,000 TW of 200 MeV gamma radiation at a distance of one light year from Earth would cause just 7.5 photons per year to strike a 1 square meter collection device. Such a spacecraft would be undetectable. The same problem occurs with X-ray emissions produced as bremsstrahlung radiation from a fusion engine (assuming D/He3), and while a detection within one light year is remotely possible, at 10 light years the impact rate falls to two per hour and the signal fades into the background noise. It’s in the realm of visible light that things begin to get more interesting. Visible light radiation from the ship’s exhaust becomes detectable through a telescope for many light years.

Thus our best case: An antimatter photon rocket with a jet power of 120,000 TW using a reflective nozzle to focus emitted light to a half angle of 30 degrees should produce an exhaust stream we can detect:

Such an object at a distance of 1 light year would be seen from Earth as a 17th magnitude light source, and could be detected on film by a first class amateur telescope. The 200 inch telescope on Mount Palomar could image it at 20 light-years, and the Hubble Space Telescope at a distance of about 300 light-years… Since at least for the upper-end telescopes considered, the number of stellar systems within range is significant (100,000 stars are within 200 light-years of Earth) this approach offers some hope for a successful search. The light from the photon rocket could be distinguished from that of a dim star by the lack of hydrogen lines in the rocket’s emissions.

More on this tomorrow, when we’ll look at magsail detection and the possibilities for other kinds of sails as well as worldships. The paper is Zubrin, “Detection of Extraterrestrial Civilizations via the Spectral Signature of Advanced Interstellar Spacecraft,” Progress in the Search for Extraterrestrial Life, ASP Conference Series Vol. 74 (1995). Available online.