SETI always makes us ask what human-centered assumptions we are making about extraterrestrial civilizations. When it comes to detecting an actual technology, like the starships we’ve been talking about in the last two posts, we’ve largely been forced to study concepts that fit our understanding of physics. Thus Robert Zubrin talks about how we might detect a magsail, or an antimatter engine, or a fusion-powered spacecraft, but he’s careful to note that the kind of concepts once studied by the Breakthrough Propulsion Physics Project at NASA may be undetectable, since we really don’t know what’s possible and what its signature might be.

I mentioned zero-point energy in a previous post because Zubrin likewise mentions it, an idea that would draw from the energy of the vacuum at the quantum level. Would a craft using such energies — if it’s even possible — leave a detectable signal? I’ve never seen a paper on this, but it’s true that one classic paper has looked at another truly exotic mechanism for interstellar travel, the wormhole. These shortcuts through spacetime make space travel a snap. Because they connect one part of the universe to another, you go in one end and come out the other, emerging into another place and, for all we know, another time.

The fact that we don’t know whether wormholes exist doesn’t mean we can’t think about how to detect one, although the authors of the classic paper on wormhole detection make no assumptions about whether or not any intelligent species would actually be using a wormhole. The paper is “Natural Wormholes as Gravitational Lenses,” and it’s no surprise to find that its authors are not only wormhole specialists like Matt Visser and Michael Morris, but physicists with a science fiction connection like John Cramer, Geoffrey Landis, Gregory Benford and the formidable Robert Forward. 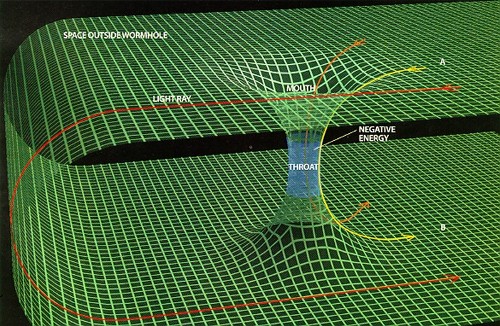 Image: A wormhole presents a shortcut through spacetime. Can one be detected? Credit: Wikimedia Commons.

The analysis assumes that the mouth of a wormhole would accrete mass, which would give the other mouth a net negative mass that would behave in gravitationally unusual ways. Thus the GNACHO (gravitationally negative anomalous compact halo object), which playfully echoes the acronym for massive compact halo objects (MACHOs). Observationally, we can look for a gravitational lensing signature that will enhance background stars by bending light in a fundamentally different way than what a MACHO would do. And because we have MACHO search data available, the authors propose checking them for a GNACHO signature.

In conventional gravitational lensing, when a massive object moves between you and a much more distant object, a greatly magnified and distorted image of the distant object can be seen. Gravitational lensing like this has proven a useful tool for astrophysicists and has also been a means of exoplanet detection. But when a wormhole moves in front of another star, it should de-focus the light and dim it. And as the wormhole continues to move in relation to the background star, it should create a sudden spike of light. The signature, then, is two spikes with a steep lowering of light between them.

The authors think we might find the first solid evidence for the existence of a wormhole in our data by looking for such an event, saying “…the negative gravitational lensing presented here, if observed, would provide distinctive and unambiguous evidence for the existence of a foreground object of negative mass.” And it goes without saying that today’s astronomy, which collects information at a rate far faster than it can be analyzed, might have such evidence tucked away in computer data waiting to be discovered by the right search algorithms.

Would a wormhole be a transportation device? Nobody knows. Assuming we discover a wormhole one day, it would likely be so far away that we wouldn’t be able to get to it to examine its possibilities. But it’s not inconceivable that a sufficiently advanced civilization might be able to create an artificial wormhole, creating a network of spacetime shortcuts for instantaneous travel. Matt Visser has discussed a wormhole whose mouth would be held open by negative energy, ‘…a flat-space wormhole mouth framed by a single continuous loop of exotic cosmic string.’ A primordial wormhole might survive from the early universe. Could one also be created by technology?

Civilizations on the Brink

More conventional means of transport like solar or laser-powered sails present serious problems for detection. In Jerry Pournelle and Larry Niven’s The Mote in God’s Eye, an alien lightsail is detected moving at seven percent of the speed of light, its spectrum the same as the star that it is approaching but blueshifted, which is how analysts have determined it is a sail. The novel’s detection occurs with far more sophisticated observatories than we have in our day, when finding a solar or lightsail in transit would be a tricky thing indeed. A fusion rocket, for example, would emit largely in the X-ray range and could be detectable for several light years, but a lightsail is a highly mutable catch.

I remembered reading something about this in Gregory Matloff’s Deep Space Probes (Springer, 2005) and checked the book to extract this:

If ET prefers non-nuclear travel, he might utilise a laser or maser light sail. If the starship is near enough and the laser/maser is powerful enough, reflections from the sail might be observable as a fast-moving and accelerating monochromatic ‘star.’ However, detection will depend on sail shape and orientation as well as other physical factors.

Therefore, it is not as easy to model the spectral signature of these craft as it is energetic nuclear craft. A starship accelerated using lasers or masers may be easier to detect during deceleration if a magsail is used.

Writing in the comments to yesterday’s post, Centauri Dreams reader James Jason Wentworth recalls Larry Niven’s short story “The Fourth Profession,” which has a lightsail detection something like the one in The Mote in God’s Eye:

“All right. The astronomers were studying a nearby nova, so they caught the intruder a little sooner. It showed a strange spectrum, radically different from a nova and much more constant. It got even stranger. The light was growing brighter at the same time the spectral lines were shifting toward the red.

“It was months before anyone identified the spectrum.

“Then one Jerome Finney finally caught wise. He showed that the spectrum was the light of our own sun, drastically blue-shifted. Some kind of mirror was coming at us, moving at a hell of a clip, but slowing as it came.”

Some sails could be truly gigantic, and we can imagine worldships large enough to require sails the size of a planetary radius, which could be detected when near their home or destination stars, but would be hard to find when in cruise. Matloff goes on to suggest that any search for this kind of ship should look near stars from which an entire civilization might be emigrating. A star like Beta Hydri is a possibility, a nearby (21 light years) solar-type star now expanding from the main sequence. This is the longest shot of all, but finding unusual signatures in visible light near a star leaving the main sequence would at least compel a second look.

Next post: A Planet Engulfed by a Red Giant?