The Magellanic Clouds, visible in the southern hemisphere, are two dwarf galaxies that orbit the Milky Way, a fact that has always captivated me. We see the galaxy from the inside, but I have always wondered what it would be like to see it from the perspective of the Magellanics. The Large Magellanic Cloud (LMC) is, after all, only 160,000 light years out, while the Small Magellanic (SMC), its companion cloud, is about 200,000 light years away. Add in the recently discovered Sagittarius Dwarf Elliptical at 50,000 light years from the galactic core and you have three exotic venues from which to gain a visual perspective on the Milky Way, at least in the imagination.

We’re so used to thinking that our solar and galactic neighborhoods are utterly commonplace that it may come as a surprise to learn that the configuration of spiral galaxy and satellite galaxies that we see in the Milky Way is actually quite unusual. New work on this comes from Aaron Robotham (International Center for Radio Astronomy Research and University of St. Andrews), whose team looked for groups of galaxies in something like our own configuration. The data for this effort is drawn from the Galaxy and Mass Assembly project (GAMA), a spectroscopic survey of ~340,000 galaxies using the AAOmega spectrograph on the Anglo-Australian Telescope that builds on and is augmented by earlier spectroscopic efforts. 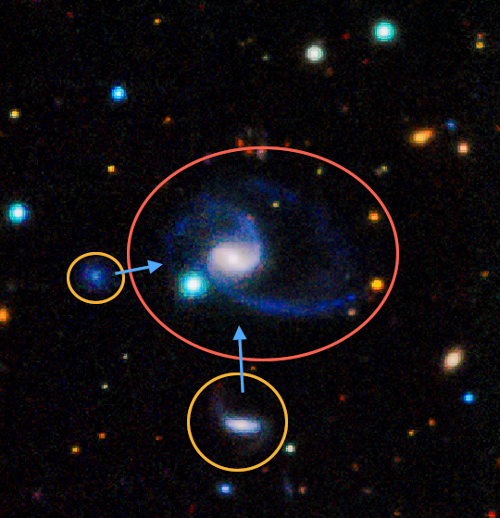 Image: This image shows one of the two ‘exact matches’ to the Milky Way system found in the survey. The larger galaxy, denoted GAMA202627, which is similar to the Milky Way clearly has two large companions off to the bottom left of the image. In this image bluer colours indicate hotter, younger, stars like many of those that are found in our galaxy. Image Credit: Dr Aaron Robotham, ICRAR/St Andrews using GAMA data.

The effort is interesting because we have never had a good understanding of how unusual the configuration of the Milky Way and its halo really is. The halo should contain the faintest known satellite galaxies because it is so close, and we should be able to study its characteristics to learn more about the galaxy’s formation history, knowledge which can then be extended to other galaxies. According to the paper on this work, simulations have trouble predicting the full distribution of satellite galaxies around the Milky Way halo, especially for the brightest of these, the Magellanics. Satellites in this configuration have been thought to be a rare occurrence.

The new work, presented at the International Astronomical Union General Assembly in Beijing, bears out this conclusion. Think of the halo as the spherical component surrounding the galaxy, which contrasts with the flat disk of the Milky Way. We’re on the cusp of major strides in our studies of galactic halos, because missions like the soon to be launched GAIA will let us measure the properties of 2 billion stars in the Local Group, including samples from all the member galaxies. For now, the Galaxy and Mass Assembly project has produced redshift data that allow Robotham and his colleagues to search for Milky Way Magellanic Cloud Analogs in the halos of galaxies with close companions much like our own.

The results bear out our simulations. The researchers found that only 3 percent of spiral galaxies like the Milky Way have satellite companions like the Magellanic Clouds. In the GAMA data, 14 galaxy systems were roughly similar to ours, but only two turned out to be a truly close match. Many galaxies have smaller galaxies in orbit around them, but few have satellites as large as the two Magellanic Clouds. About the closest matches, the paper has this to say:

Only two full analogues to the MW [Milky Way]-LMC-SMC system were found in GAMA, suggesting such a combination of late-type, close star-forming galaxies is quite rare: in GAMA only 0.4% (0.3%–1.1%) of MW mass galaxies have such a system (a 2.7σ event). In terms of space density, we ﬁnd 1.1 × 10−5 Mpc−3 full analogues in GAMA (in a volume of 1.8 × 105 Mpc3). The best example found shares many qualitative characteristics with the MW system. The brightest pair galaxy has spiral features, as does the bigger minor companion. The minor companions are ∼40 kpc in projected separation, so not in a close binary formation like the SMC and LMC.

Adds Robotham: “The galaxy we live in is perfectly typical, but the nearby Magellanic Clouds are a rare, and possibly short-lived, occurrence. We should enjoy them whilst we can, they’ll only be around for a few billion more years.”

Previous post: A Planet Engulfed by a Red Giant?