Sonny White’s work on exotic propulsion has galvanized the press, as witness this story in the Daily Mail, one of many articles in newspapers and online venues. I was fortunate enough to be in the sessions at the 100 Year Starship Symposium where White, an engaging and affable speaker, described what his team at Eagleworks Laboratories (Johnson Space Center) is doing. The issue at hand is whether a so-called ‘warp drive’ that distorts spacetime itself is possible given the vast amounts of energy it demands. White’s team believes the energy problem may not be as severe as originally thought.

On that idea hangs the warp drive. Physicists Michael Pfenning and Larry Ford went to work on Miguel Alcubierre’s 1994 paper, the first to examine the distortion of spacetime as a driver for a spacecraft, to discover that such a drive would demand amounts of energy beyond anything available in the known universe. And that was only the beginning. Alcubierre’s work demanded positive energy to contract spacetime in front of the vessel and negative energy to expand spacetime behind it. Given that we do not know whether negative energies densities can exist, much less be manipulated by humans, the work remained completely theoretical. 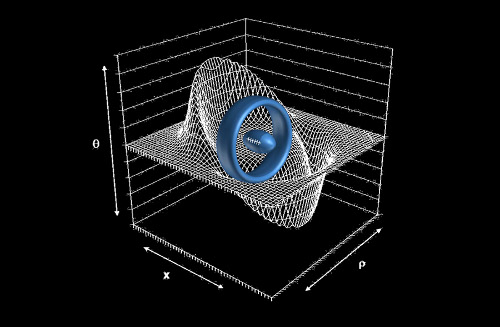 Image: A starship (in the center of the ring) taking advantage of the distortion of spacetime. Credit: Harold White.

But interesting things have developed since the original Alcubierre paper. Running quickly through what White told the Houston audience, Chris van Den Broeck was able to reduce the energy costs of a warp drive significantly and other theorists have continued to drop the numbers. White’s team has been examining ways to continue that progression, but what is eye-catching is that he is working on a laboratory experiment to “perturb spacetime by one part in ten million” using an instrument called the White-Juday Warp Field Interferometer to create the minute spacetime disruption.

I know of no teams other than White’s who are looking at lab work that could tell us whether a perturbation of spacetime can actually be created. From a NASA document on this work:

Across 1cm, the experimental rig should be able to measure space perturbations down to ~1 part in 10,000,000. As previously discussed, the canonical form of the metric suggests that boost may be the driving phenomenon in the process of physically establishing the phenomenon in a lab. Further, the energy density character over a number of shell thicknesses suggests that a toroidal donut of boost can establish the spherical region. Based on the expected sensitivity of the rig, a 1cm diameter toroidal test article (something as simple as a very high-voltage capacitor ring) with a boost on the order of 1.0000001 is necessary to generate an effect that can be effectively detected by the apparatus. The intensity and spatial distribution of the phenomenon can be quantified using 2D analytic signal techniques comparing the detected interferometer fringe plot with the test device off with the detected plot with the device energized.

So it’s interesting stuff, and it takes us to an even lower energy requirement, from the mass-energy of a planet the size of Jupiter to, in White’s view, a mass about the size of one of our Voyager probes. The reduction in the exotic matter/negative pressure required is managed by optimizing the warp bubble thickness and also by oscillating the bubble intensity, which according to White’s mathematics reduces the stiffness of spacetime. Thus we go from a Jupiter-sized portion of exotic matter to an amount weighing less than 500 kg.

White said the test was an attempt to prove that spacetime perturbation is possible, and likened it to a ‘Chicago pile moment.’ It was in 1942 that the first demonstration of a controlled nuclear reaction produced just half a watt of power, but a year later a four megawatt reactor was already in operation. With no tidal forces inside the warp bubble and a proper acceleration of zero, a future craft would be an undemanding platform in which to travel, and White pointed out that clocks aboard the spacecraft would move at the same rate as clocks back on Earth. It’s an exotic idea, but one that White’s lab testbed will now poke and prod to see if it’s possible.

Addendum: Al Jackson just sent me an email about other matters, but it includes a portion that’s specifically related to the above topic that I want to quote:

“I did my doctorial stuff in General Relativity. When I was in Austin for Armadillocon, last August, I asked my adviser, Richard Matzner, about the Alcubierre deal, since Richard does a lot of numerical GR he knows Alcubierre (who is an ace numerical GR guy), says he never heard him talk about his warp drive. Richard is not much interested in it either, thinks the solution is Lyapunov unstable. I have seen some works from Italy about Alcubierre and other ‘exotic matter’ warp solutions that show the models are unstable. Richard said he thinks Kip Thorne is no longer interested in it. I have never seen a really ‘heavy hitter’ like Hawking or Thorne, or a whole lot of other first string GR theorists ever remark on Alcubierre or the other recent solutions. There was a ‘name’ relativistist, William A. Hiscock, who did, he felt the solutions were not physical, but he thought people should keep trying. Alas that guy died young, only a few years ago.

But it is interesting that these solutions exist. I think, it’s going to take more imagination and further discoveries before something can be made of this.”