At the 100 Year Starship Symposium in Houson, I sent out a large number of tweets as @centauri_dreams. That Twitter account is still live, but be aware that my son Miles, who is now working actively with us, has set up a new account solely for the Tau Zero Foundation. You can access @TZFoundation to pick up interesting links and news of the interstellar community. I suspect, for example, that when Miles runs across articles like the one I’m going to be discussing today, they’ll appear on Twitter, but he’s bound to find a lot of good material that I miss.

Yesterday we were looking at distance issues as Larry Klaes discussed the extension of Ithaca, NY’s Sagan Planet Walk all the way to Hawaii, where a new ‘station’ represents Alpha Centauri. Matters of scale are important to convey to the public because getting across the distances involved in interstellar flight is tricky, and various ways of modeling them can provide the needed perspective. Peter Garretson thinks about scale as well, but in What Our Civilization Needs Is a Billion Year Plan, a new piece on the Kurzweil Accelerating Intelligence blog, he attacks the issue in terms of time. And actually he ranges a good deal beyond the billion years mentioned in the title.

Lt. Col. Garretson has been thinking about futuristic issues for a long time. He’s a space advocate who serves as Chief of Future Science and Technology Exploration for Headquarters Air Force, a man who has written widely on issues ranging from planetary defense to space solar power, and in a number of white papers he has discussed investment strategies for high risk/high return technologies and lunar development. In the Kurzweil piece, he picks up on a presentation originally made at the International Space Development Conference last year. 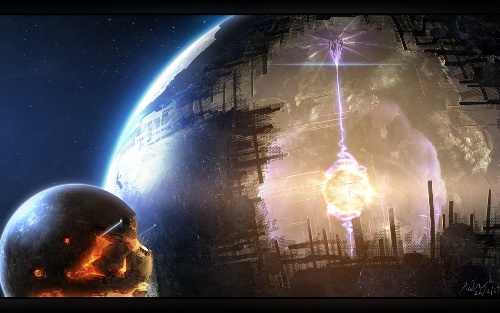 Image: An imagined far future as a Kardashev Type II civilization exploits its system to enclose its star in a Dyson sphere. Credit: Adam Burn.

Usually when I talk about a ‘long-term’ strategy, I’m looking centuries and conceivably a millennium ahead, but Garretson takes us to the death of the Sun and beyond. And in the interim, he’s suggesting that we should be planning for a future in space that begins with O’Neill-style space colonies constructed out of materials in the asteroid belt, ultimately enough to support between 10 and 100 trillion humans (links to the sources for these numbers are provided in the text). Key to the short-term plan, which could itself take centuries, is the need for energy. He considers fossil fuels a kind of ‘baby fat’ for the Earth to use in growing to adolescence, saying that spacefaring and new energy sources will have to be developed before we run out of this ‘easy’ energy and lose the energy capital we need to create the crucial precursor technologies.

Even so, abundant future energy doesn’t mean we can stay on Earth forever:

The case where we transcend a fossil fuel crisis is just as compelling. If we succeed in continuing our population and development growth and find new energy sources, and assuming energy use (including all sources: fossil, nuclear, fusion, etc.) grows at annual rate of 2.3% (reduced from the current 2.9% to be more realistic), we’d only be able to continue growth on Earth for another 420 years before we could not maintain the heat balance of the planet, and started boiling the oceans ourselves.

Imagine a future Earth ringed by solar power satellites maintaining a population of some 10 billion or so in relative prosperity, its needs met by 40-50 TW of total electrical energy. It could be a green and prosperous place, but the vision Garretson suggests is of a place that might quickly become something of a backwater as a spacefaring civilization grows up to 10,000 times more populous. This is a lively essay, profusely illustrated, pointing ahead to Kardashev Type 2 — where the total energy of the Sun could be exploited — and into a still more speculative future beyond.

Interstellar flight plays a major role in Garretson scenarios, and he’s generous in mentioning not only our Frontiers of Propulsion Science text (edited by Marc Millis and Eric Davis and published by the AIAA in 2009), but also the 100 Year Starship organization, the prior work of the Breakthrough Propulsion Physics project run by Millis at Glenn Research Center in Cleveland, and the Tau Zero Foundation. Icarus Interstellar should make an appearance here as well, and I suspect a future iteration of this presentation will include the ongoing re-design of the British Interplanetary Society’s Daedalus starship, now under the capable leadership of Pat Galea.

I won’t go through all the future possibilities Garretson examines — you’ll want to read the essay yourself, where you’ll find speculations going as far ahead as the ‘degenerate era’ some 1014 to 1040 years from now. But drivers for a bolder space program in our own time also make an appearance, including severe damage and even mass extinctions caused by asteroids. An asteroid mining infrastructure, which we may be seeing the first steps toward through organizations like Planetary Resources, will ultimately develop the best methods for asteroid deflection, an early priority for a civilization spreading out into the Solar System.

Along the way there is a healthy jolt of inspiration:

Many look at the significant events discussed above as “doomsday scenarios,” but to me, they are just eventualities to be planned for, and chance favors the prepared mind. It’s also a happy consequence that the farther out you look for problems, and the bigger problems you try to tackle, the more likely you are to perceive and be able to bring ambitious thinking to more proximate problems.

If we had not been building instruments in space to look far out into space, we would not even know about the threats of asteroids, comets, gamma-ray-bursts or galactic collisions. We also would not have the space-based surveillance to know about the hurricane or tsunami on its way. Lifting our eyes to the horizon pays.

Of course, there are more proximate threats, and several of our own creation. But personally, I bet on humanity, not against humanity. We are the life carriers, the intelligence, and the gametes of Gaia. It is our destiny to spread not just human life, but the entire clan of life, and intelligence, first to the Solar System, and then to the stars.

Garretson is a man of sweeping concepts, and in that sense he picks up on the same kind of optimism about space that used to infuse our culture in the period before the first moon landings, the breathtaking notions that Chesley Bonestell illustrated for Collier’s and Wernher von Braun advanced as what seemed to be a sure path to Mars. Much has changed in the days since, but we need the deeply imaginative vision to reawaken a public sense of awe over our possibilities in the cosmos. All this is a tough sell in our time, but Garretson knows it’s worth trying. Being bold can help open minds and launch careers that will matter down the line.