I’ve been fascinated with Edward Belbruno’s work on ‘chaotic orbits’ ever since meeting him at an astrodynamics conference in Princeton some years back. The idea is to develop low-energy routes for spacecraft by analyzing so-called ‘weak stability boundaries,’ regions where motion is highly sensitive and small changes can create gradual orbital change. A low-energy route was what Belbruno used in 1991 to help the Japanese spacecraft Hiten reach the Moon using almost no fuel, a proof of concept about which the physicist said “It saved the spacecraft, and it saved my career.” 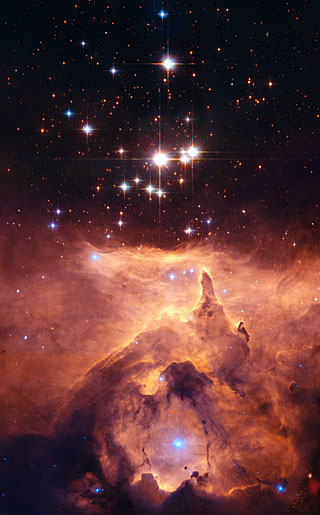 That comment came from a lecture to the Mathematical Association of America in 2009 that you can listen to here. It’s fascinating in its own right, but doubly so since Belbruno is back in the news with new findings on the idea of panspermia, and specifically that version of panspermia called lithopanspermia. In this hypothesis, elemental life forms are distributed between stars in planetary fragments created by asteroid impacts, volcanic eruptions and other disruptive events. Drifting through space, the fragments are eventually caught in another solar system’s gravity, some of them conceivably falling on worlds in the habitable zone of their star.

Image: The Sun is thought to have formed in a cluster of other stars around 4.5 billion years ago. Newly born star clusters like Pismis 24 (pictured) may be similar to the environment in which the Sun spent in its early years. Much closer to its neighbours than it is now, the nascent Solar System probably exchanged material with other planetary systems, and it is possible that early life could have spread between these neighbouring planetary systems. Credit: NASA, ESA and Jesús Maíz Apellániz (Instituto de Astrofísica de Andalucía, Spain).

Could something like this have caused life to begin on Earth? Belbruno’s work, with Amaya Moro-Martín (Centro de Astrobiología and Princeton University) and Renu Malhotra (University of Arizona) simulates conditions when the Sun was young and still a part of the cluster that gave it birth. Using simulations performed by Princeton graduate student Dmitry Savransky, the researchers applied the theory behind chaotic orbits and in particular the idea of ‘weak transfer,’ which they believe offers rocky fragments moving at low velocities a high probability of moving between close stars. In fact, they believe our system could have exchanged materials with its nearest planetary system neighbor 100 trillion times before the Sun left its native cluster.

“The conclusion from our work,” Moro-Martín says, “is that the weak transfer mechanism makes lithopanspermia a viable hypothesis because it would have allowed large quantities of solid material to be exchanged between planetary systems, and involves timescales that could potentially allow the survival of microorganisms embedded in large boulders.”

Moro-Martin adds that the work does not prove lithopanspermia actually happened, but indicates it is an open possibility, with further study needed into the question of rocky materials landing on a terrestrial planet. Could life have arisen on Earth before the dispersal of the cluster? The authors believe that it could, assuming life arose shortly after there is evidence of liquid water on its crust. From the paper on this work:

Within this timeframe, there was a mechanism that allowed large quantities of rocks to be ejected from the Earth: the ejection of material resulting from the impacts at Earth during the heavy bombardment of the inner solar system. This bombardment period lasted from the end of the planet accretion phase until the end of the LHB 3.8 Ga, i.e. it finished when the solar system was approximately 770 Myr old (Tera et al. 1974; Mojzsis et al. 2001; Strom et al. 2005). It represents evidence that planetesimals were being cleared from the solar system several hundred million years after planet formation (Strom et al. 2005; Tsiganis et al. 2005; Chapman et al. 2007). This period of massive bombardment and planetesimal clearing encompassed completely the “window of opportunity” for the transfer of life-bearing rocks discussed above and therefore provides a viable ejection mechanism that may have led to weak transfer. 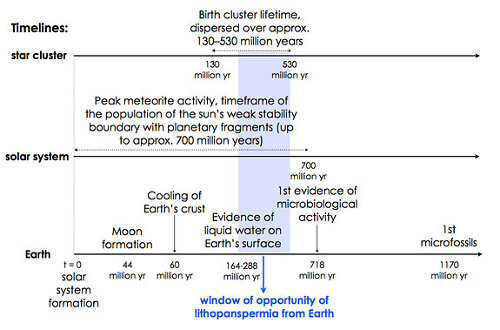 Image: The researchers suggest that ideal conditions for lithopanspermia in the sun’s birth cluster, in the solar system and on Earth overlapped for several hundred million years (blue shaded area). Rock evidence suggests that the Earth (bottom line) contained surface water during a period when the relative velocities between the sun and its closest cluster neighbors (top line) were small enough to allow weak transfer to other planetary systems, and when the solar system (middle line) experienced high meteorite activity within the sun’s weak gravitational boundary. If life arose on Earth shortly after surface water was available, life could have journeyed from Earth to another habitable world during this time, or vice versa if life had an early start in another planetary system. Credit: Amaya Moro-Martín.

Back in 2005, David Spergel (Princeton) and Fred Adams (University of Michigan) studied binary stars in young clusters. They found that the chances of life-bearing rocks being exchanged between star systems ranged from one in a million to one in a thousand, depending on the scenario invoked. Of the new work, Adams says:

“This paper takes the type of calculations that have been done before and makes an important generalization of previous work. Their work on chaos in this context also carries the subject forward. They make a careful assessment of a process that is dynamically quite complicated and chaotic in nature. They are breaking new ground from the viewpoint of dynamical astrophysics. Regarding the problem of lithopanspermia, this type of weak capture and weak escape is interesting because it allows for the ejection speeds to be small, and these slow speeds allow for higher probabilities of rock capture. To say it another way, chaos, in part, enhances the prospects for lithopanspermia.”

The paper is Belbruno et al., “Chaotic Exchange of Solid Material between Planetary Systems: Implications for Lithopanspermia,” published September 12 in Astrobiology (preprint). The Spergel and Adams paper is “Lithopanspermia in Star Forming Clusters,” Astrobiology Vol. 5, No. 4 (2005). Preprint available. This Princeton news release contains details about the simulations used in the Belbruno study.