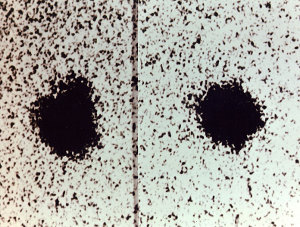 Our view of Pluto/Charon gets better and better as we prepare for the New Horizons flyby in 2015. It wasn’t so long ago that we had no idea Pluto had a single moon, much less the five we have so far identified. When James Christy (USNO) discovered Charon in 1978, he was looking at photographic plates of Pluto that showed little more than a slight bulge that appeared periodically. The bulge came into and out of view as the [dwarf] planet rotated, indicating a genuine object and not a flaw in the observation, but although Charon had been found, we couldn’t resolve separate disks until the Hubble Space Telescope’s images of the 1990s.

Image: Plates taken with the Kaj Strand Astrometric Reflector at the USNO Flagstaff Station in Arizona revealed the existence of Charon, visible as an elongation in the image. Later eclipses and occultations of Pluto and Charon confirmed the discovery. Charon has a mass of about 22 percent that of Pluto. Credit: Wikimedia Commons.

The Hubble images, unlimited by distortions from Earth’s atmosphere, have revealed much about Pluto/Charon. But take a look at another image, this one taken with the Gemini North 8-meter instrument. This is said to be the sharpest ground-based imagery of Pluto/Charon ever taken in visible light. These observations have not only verified the orbital characteristics of the two objects but are sharp enough to reveal their precise diameters. Steve Howell (NASA Ames), who led the study, says “The Pluto-Charon result is of timely interest to those of us wanting to understand the orbital dynamics of this pair for the 2015 encounter by NASA’s New Horizons spacecraft.” 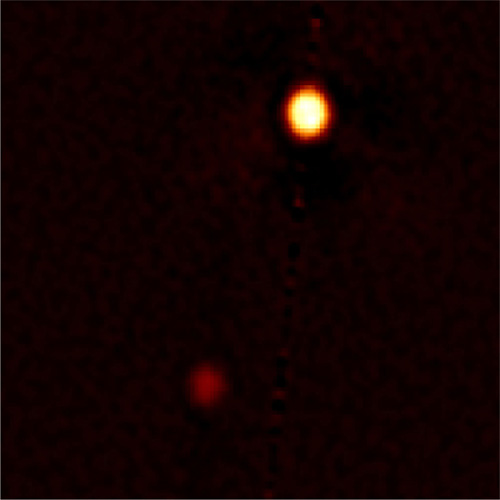 The technique being used here is called reconstructive speckle imaging, made possible through mounting a camera called the Differential Speckle Survey Instrument (DSSI) onto the telescope. Using these methods, a large number of short exposure images are processed to remove the effects of atmospheric distortion. Each image was exposed for 60 milliseconds. Over the range of images, the light from the objects under observation could be separated from the transient artifacts caused by the atmosphere. The DSSI instrument and associated software were created by Elliott Horch (Southern Connecticut State University) and team in 2007. Detectors for the instrument were upgraded in late 2009, making possible the new levels of sensitivity shown here.

Image: Speckle image reconstruction of Pluto and Charon obtained in visible light at 692 nanometers (red) with the Gemini North 8-meter telescope using the Differential Speckle Survey Instrument (DSSI). Resolution of the image is about 20 milliarcseconds rms [root mean square]. This is the first speckle reconstructed image for Pluto and Charon from which astronomers obtained not only the separation and position angle for Charon, but also the diameters of the two bodies. North is up, east is to the left, and the image section shown here is 1.39 arcseconds across. Credit: Gemini Observatory/NSF/NASA/AURA.

Reconstructive speckle imaging is showing its stuff with Pluto/Charon, but the bigger picture is that the upgraded DSSI can be used in the exoplanet hunt. Kepler’s transit studies require follow-ups from other instruments to confirm the discoveries, and the original DSSI had been in use at Kitt Peak for this purpose. NASA’s Howell says that speckle imaging with the Gemini telescope will double the instrument’s ability to resolve objects, offering a 3- to 4- magnitude sensitivity increase for the sources the team needs to observe. The astronomer calls it “an enormous gain in the effort underway to confirm small Earth-size planets.”