Wanderers Between the Galaxies

The idea of planets outside their normal settings is unsettling. It implies that beyond the stars all around us there may be worlds without suns, dark planets presumably pushed there by gravitational instabilities in their home systems. We’ve looked at such ‘nomad’ worlds before, noting that ice overlaying a frozen ocean might trap enough geothermal heat to create life-sustaining conditions. Estimates on how many such planets might exist vary widely, but in one recent paper Louis Strigari (Stanford University) has calculated that 105 objects larger than Pluto may exist for every main sequence star (see Island-Hopping to the Stars for more on Strigari’s work on free-floating planets). Survey missions like Gaia may help us find some of these.

If a wandering world between the stars is a chilling prospect, what about stars that wander between the galaxies? We have plenty of evidence for their existence. Strip away the emissions from our own Solar System and the Milky Way itself and what you get is the Cosmic InfraRed Background (CIRB), with near-infrared and optical wavelength starlight being redshifted into the infrared, while some of the light is absorbed by dust and re-emitted in the far-infrared. Edward Wright (UCLA) offers up a concise take on the CIRB with photos and a useful diagram.

Early satellites working in the infrared like the Infrared Astronomy Satellite (IRAS) began the modern era of CIRB studies, now being pursued by instruments like the Spitzer Space Telescope. Nature has just published new work from Asantha Cooray (UC-Irvine) and team that uses data from Spitzer to study the infrared background glow, a phenomenon that Cooray says has remained mysterious despite recent studies. Not that it hasn’t spawned theories: Alexander Kashlinsky (NASA GSFC) has argued that the blotchy patterns the infrared glow makes on Spitzer images is coming from the first stars and galaxies. Cooray and company disagree.

Homing in on a section of sky covering an arc equivalent to 50 full Moons — the Boötes field — in a survey that admittedly lacked the sensitivity of Kashlinsky’s data, the Cooray team used their larger-scale study to conclude that the infrared glow is too bright to come from the first galaxies. Instead, they see the light as coming from stars beyond the halos of galaxies, some of them in the spaces between entire galactic clusters. Says Cooray: “A light bulb went off when reading some research papers predicting the existence of diffuse stars. They could explain what we are seeing with Spitzer.” 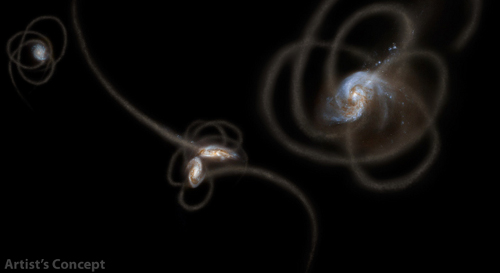 Image: New research from scientists using NASA’s Spitzer Space Telescope suggests that a mysterious infrared glow across our whole sky is coming from stray stars torn from galaxies. When galaxies grow, they merge and become gravitationally tangled in a violent process that results in streams of stars being ripped away from the galaxies. Such streams, called tidal tails, can be seen in this artist’s concept. Scientists say that Spitzer is picking up the collective glow of stars such as these, which linger in the spaces between galaxies. This artwork is adapted, in part, from galaxy images obtained from the NASA/ESA Hubble Space Telescope. Credit: NASA/JPL-Caltech.

The James Webb Space Telescope should help us take this work to the next level, revealing the objects that make up the background infrared light. If Cooray’s team is right, the presence of these lone stars could be accounted for by galactic collisions whose gravitational interactions would propel such stars into the deep. This scenario — and the more gradual absorption of dwarf galaxies by larger neighbors — may thus explain our intergalactic wanderers. Could such stars have intact planetary systems despite the forces applied to them in these interactions?

On such questions hangs not only interesting science but wildly speculative venues for science fiction. The paper is Cooray et al., “Near-infrared background anisotropies from diffuse intrahalo light of galaxies,” published in Nature 494 (2012), pp. 514-516 (abstract / preprint).